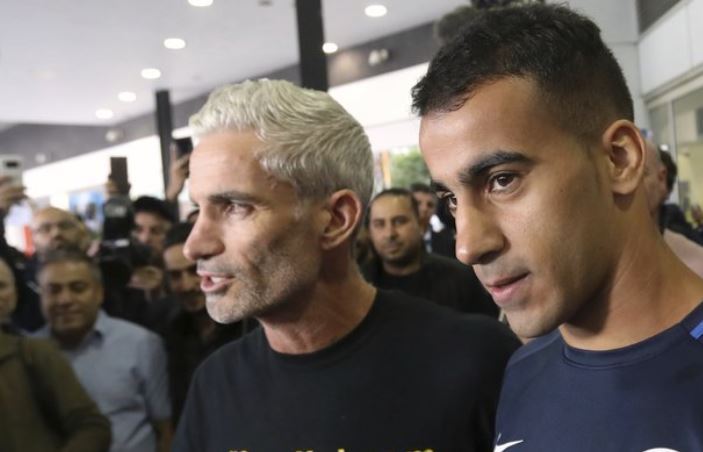 Two women photographed in an anguished embrace during the Parkland school massacre in Florida last year are now at odds — like the nation itself — over gun control.

In the four decades since the Islamic Revolution prompted many to flee Iran, they have put down roots and are finding ways to pass their culture to their American children and grandchildren.

4. WHERE THERE IS AN EXTREMIST RESURGENCE

In Nigeria, with elections just ahead, the Islamic State West Africa Province — a Boko Haram offshoot — has become IS' largest presence outside the Middle East with more than 3,000 fighters.

5. TOP PENTAGON OFFICIAL IN IRAQ TO DISCUSS US TROOP PRESENCE

Pat Shanahan, the acting secretary defense, wants to hear firsthand about the state of Iraq's fight against remnants of the Islamic State group.

Refugee soccer player Hakeem al-Araibi returns home after the threat of extradition to Bahrain is lifted and three months after he was detained in Thailand.

7. WHO IS BEING LAID TO REST

Former Michigan Rep. John Dingell, America's longest-serving member of Congress, will be eulogized as former Vice President Joe Biden and other dignitaries are expected to attend.

9. 'THEY ARE ON THE WRONG SIDE OF HISTORY'

Harrison Ford offers an emphatic plea for protecting the world's oceans, calling out Trump and others who "deny or denigrate science."

10. THESE LITTLE MEN ARE BIG-TIME SCORERS

Campbell's 5-foot-9 Chris Clemons is leading the country in scoring at 29.1 points per game, headlining a crop of big-time undersized scorers in college basketball.