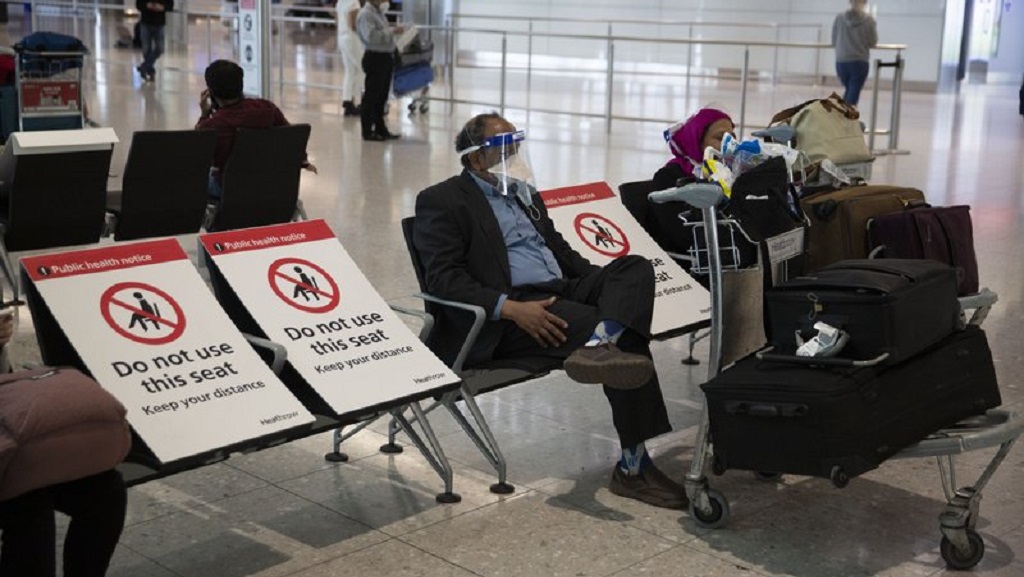 A man sits wearing a face shield in the arrivals area on the first day of new rules that people arriving in Britain from overseas will have to quarantine themselves for 14 days to help stop the spread of coronavirus, at Heathrow Airpot in London, Monday, June 8, 2020. The British government has said that anyone caught not complying with the quarantine will face a fine. (AP Photo/Matt Dunham)

Three major airlines have launched legal action against the British government, describing the country's plan to quarantine most incoming travellers as "flawed.''

British Airways, easyJet and Ryanair said in a statement Friday that the quarantine will have a "devastating effect,'' on tourism and the wider economy. The airlines want the government to re-adopt its previous policy, where quarantine is limited to passengers from "high risk" countries.

Quarantine measures imposed this week stipulate that all passengers — bar a handful of exceptions like truckers or medical workers — must fill in a form detailing where they will self-isolate for two weeks. The requirement applies regardless of whether they are UK citizens or not, and those who fail to comply could be fined.

The quarantine was imposed after a heated debate on whether it would help British efforts to tamp down the UK outbreak or simply stamp out any hopes that the British tourism industry will recover following months of lockdown.

Though industry advocates have suggested that Britain should create "air bridges'' with countries that have low transmission rates, the government has hesitated. The airlines argue there has been no detail on how such proposals would be implemented.

"(The airlines) want the government to re-adopt its previous quarantine policy introduced on March 10, where quarantine is limited to passengers from 'high risk' countries,'' they said in a statement. "This would be the most practical and effective solution and enables civil servants to focus on other, more significant, issues arising from the pandemic while bringing the UK in line with much of Europe which is opening its borders mid-June.''

Airlines around the world are being slammed by the near total freeze in travel as countries seek to contain the outbreak. Carriers are forecast to lose $84 billion globally this year, which would be the industry's worst ever by far.

Some have filed for bankruptcy or sought bailouts to survive the near-shutdown in their activity, and many are cutting thousands of jobs. The sector will likely take years to recover.

British Airways, easyJet and Ryanair argue that the UK quarantine rules are more stringent than guidelines applied to people who actually have COVID-19, who do not have to report to authorities on their location.

Prime Minister Boris Johnson's Conservative government has been widely criticized for its slow response to fighting the outbreak. Many in his government, including Johnson himself, came down with coronavirus.

Britain did not close its borders or impose testing and tracing measures for most travellers during the worst of the coronavirus outbreak. The government had insisted until May that putting restrictions at the border wouldn't have a significant impact on the spread of the virus in the UK

Aviation has suffered huge losses following the near-halt in air travel as a result of pandemic restrictions. Hopes to rescue some part of the summer season depend on the relaxation of some rules.

Airlines aim for takeoff as lockdowns ease and demand rises