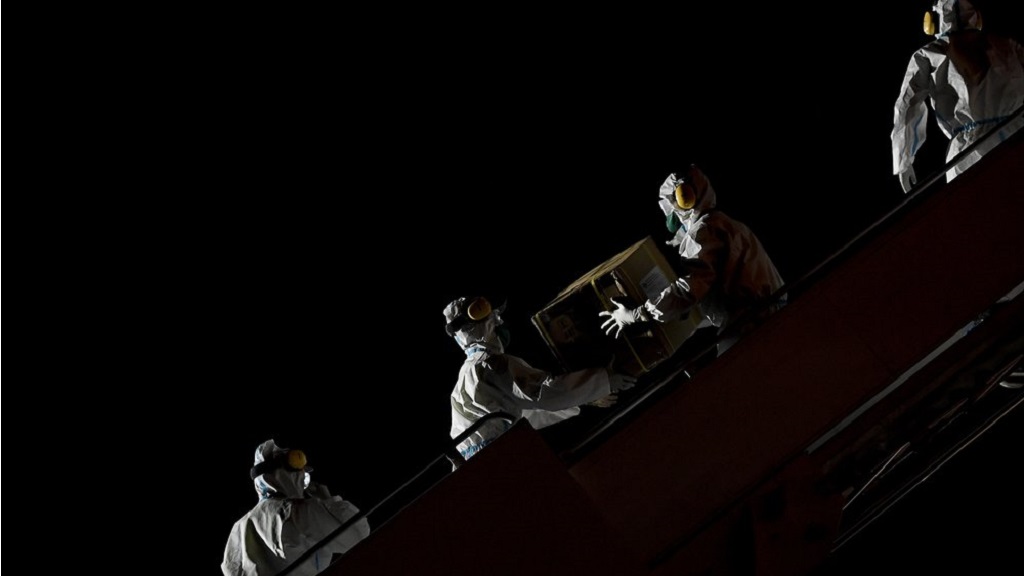 FILE - In this March 30, 2020, file photo, Venezuelan workers wearing protective face masks and suits as a preventive measure against the spread of the coronavirus unload boxes of humanitarian aid as medical supplies and specialists from China arrive to Simon Bolivar International Airport in La Guaira, Venezuela. (AP Photo/Matias Delacroix, File)

A new snapshot of the frantic global response to the coronavirus pandemic shows some of the world's largest government donors of humanitarian aid are buckling under the strain: Funding commitments, for the virus and otherwise, have dropped by a third from the same period last year.

The analysis by the UK-based Development Initiatives, obtained in advance by The Associated Press, offers a rare real-time look at the notoriously difficult to track world of aid.

At a time when billions of people are struggling with the pandemic and the ensuing economic collapse — on top of long-running disasters like famine, drought or unrest — more, not less, money is urgently needed.

New virus protection equipment must be bought for almost everything, from maternity wards in African villages to women's shelters in Syrian refugee camps.

"We have not seen substantial funding for COVID, yet the situation is going to get worse," Rosalind Crowther, South Sudan country director for the aid group CARE, told the AP in May, saying "some donors have backtracked on earlier commitments." The group runs two dozen health centers, more than 40 feeding centers and a safe house in one of the world's most fragile countries following civil war.

In Somalia, a mother of twin baby boys told Amnesty International she had to give birth in her makeshift home in a camp for displaced people because no local health clinic was open. Aid workers told Amnesty researcher Abdullahi Hassan the newly reduced services were due to lack of funding.

"You can imagine how risky this is," he told the AP.

During the first five months of this year, overall aid commitments from the largest government donors were $16.9 billion, down from $23.9 billion in the same period last year, according to the new analysis, which drew on data from the United States, the United Kingdom, European Union institutions, Germany, France, Canada and others.

Many of these donors — notably the UK, whose aid commitments have dropped by nearly 50% from last year, according to the analysis — are struggling as their economies contract. The sheer magnitude of the crisis is another challenge as every part of the world needs help — and now.

The reality on the ground could be even worse than the analysis indicates: Crucially, it only shows promises of aid. Just how much of the billions of dollars pledged have reached those in need is not yet clear.

In some cases, the response to the pandemic has been alarmingly slow. In June, more than two dozen international aid groups wrote to the US about its pledged coronavirus aid, saying that "little to no US humanitarian assistance has reached those on the front lines" and calling the uncharacteristic delays "devastating."

Their letter came as the US promoted global leadership on the COVID-19 response with more than $1 billion committed. Aid groups are now waiting to see whether the US will deliver millions of dollars this month as indicated.

This new analysis, like any measure of aid, is imperfect — it looks at data published to the International Aid Transparency Initiative, which is voluntary but widely used. It is also more current than other measures: The data was downloaded on July 10.

The drop in funding is keenly felt by aid groups on the ground.

A survey in May of 92 members of Bond, the UK network for nongovernmental organizations working in international development, found just 16% had received any new funding from the UK's Department for International Development while fighting the pandemic in developing countries, and 41% were responding without any extra funding at all.

Some aid groups are warning the window to prevent the pandemic's worst effects is narrowing while the global humanitarian response "remains woefully underfunded," as Refugees International said last week.

Meanwhile, "we are concerned that we are seeing a repurposing of existing funds ... rather than a release of new funding," Selena Victor, Mercy Corps' senior director for policy and advocacy, has said of the EU's response.

An UN-run emergency delivery service that has kept tons of humanitarian aid flowing to scores of countries hurt by travel restrictions could shut down in the coming weeks because "there has been no significant funding" from donor countries, the World Food Program said. Just 19% of the $965 million request has come in.

While individual governments struggle, the largest so-called multilateral organizations including the World Bank and the Global Fund have stepped up, perhaps not yet affected by budget constraints.

The challenges remain vast as various streams of assistance, including remittances, falter. "All resources ... are set to fall," according to a separate new Development Initiatives report.

That drop could continue for months. Official development assistance — government aid for developing countries' economic development and welfare — could shrink by almost $20 billion worldwide between last year and 2021 under a worst-case scenario that envisages an extended pandemic. The cuts could continue "as government assess domestic priorities," that report says.

COVID-19 arrived in a world already facing a growing number of humanitarian crises, from Yemen to Myanmar to West Africa's Sahel. Now the pandemic "threatens to create a funding vacuum," the report says.

As of the end of June, it says, UN-coordinated calls for aid for this year were up 25% from last year because of additional needs created by the pandemic, reaching more than $37 billion.

Last week, the United Nations again increased its request for the pandemic response alone to $10.3 billion — the largest appeal in its history.

Only $1.7 billion has been received. Up to $40 billion might be needed.

"The response of wealthy nations so far has been grossly inadequate and dangerously short-sighted," UN humanitarian chief Mark Lowcock said. "Failure to act now will leave the virus free to circle 'round the globe."