Are any of these jewellery items yours? Police need your help. 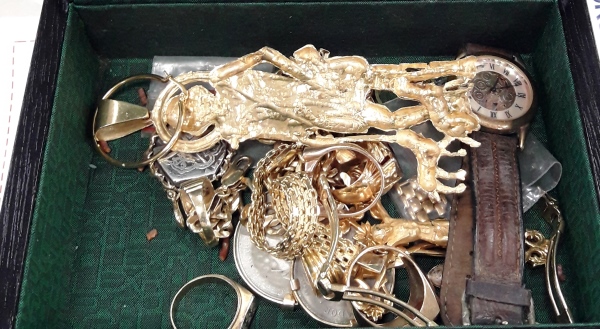 Have you or someone you know been robbed of jewellery? It might have been found.

In December 2019, the police had cause to carry out searches at several locations. During one of the searches, several items of jewellery (pictured above) were seized and are believed to have been stolen.  The recovered items have been photographed and forensically examined as best as possible, and are now being issued to the public in an effort to link the items to their rightful owners.

In order to claim any item from the police, members of the public must be able to prove without a doubt that the items being identified belong to them. There are several ways to do this – some of which are: 1) Providing pictures of the item when it was first purchased, 2) presenting receipts of purchase, 3) providing serial numbers or 4) descriptions of unique markings on the item done by you in order to brand the item as your own.

Detectives with the RCIPS are also reminding members of the public to record, list and photograph their valuables so that they can be easily identified by the police after making a report. As it relates to jewellery, discrete markings or engravements should be considered.

Anyone with information regarding these items is also encouraged to contact the detectives directly.

Bodden Town man due in court on Burglary charge

Man Charged with burglary, damage to property, and drug offences

Man due in court charged with Aggravated Burglary and other offences