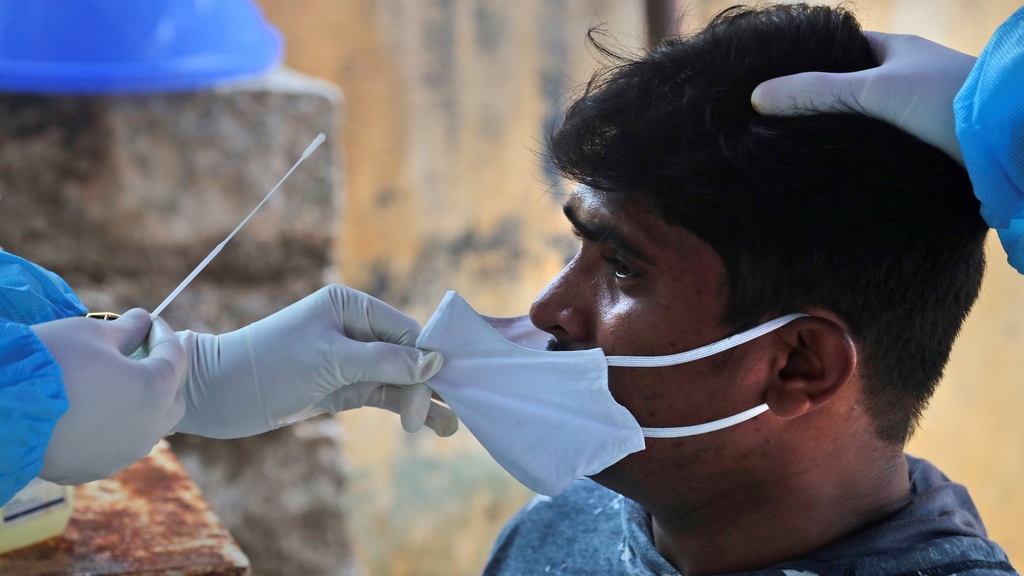 India reported another 86,052 coronavirus cases in the past 24 hours, a declining trend with recoveries exceeding new cases this week.

The latest update from the Health Ministry on Friday raised the nation's total to more than 5.8 million. The ministry said 1,141 more people died in the past 24 hours, for a total of 92,290.

India is expected to become the pandemic's worst-hit country within weeks, surpassing the United States, where more than 6.9 million people have been infected.

The ministry said India's recovery rate has crossed 81.55 per cent. On Thursday, the number of people newly recovered, 87,374, exceeded the number newly infected. And the more than 562,000 new recoveries confirmed between September 18 and Wednesday exceeded the 517,800 new cases over that time.

Less than 1 million people still have active infections while the number of people discharged from hospitals and quarantines exceeds 4.7 million, the ministry said.

India's newly reported infections have remained below 90,000 for five straight days after hitting a record 97,894 on September 16.

Though there was a 12 per cent dip in testing for five days, it picked up again to 1.1 million on Thursday, the ministry said.

The total number of tests have crossed 67 million so far in the country with nearly 1.4 billion people.

But a large number of them are antigen tests which are faster but less accurate compared to RT-PCR, the gold standard for the coronavirus. Antigen tests look for virus proteins while RT-PCR tests look for genetic material from the virus.

In other developments around the Asia-Pacific region:

— Hong Kong Disneyland has reopened for the second time as the semi-autonomous Chinese city again appears to have brought new coronavirus cases down to near zero.

The resort had shut down during the initial stage of the outbreak this year when the city closed schools and offices and took other severe steps to contain its spread. It reopened after cases dropped off but then shut again once they began to climb again over the summer.

The resort re-opened Friday with social distancing measures in place in lines, restaurant seating, rides and other facilities, along with more frequent cleaning and disinfecting in the areas with the most visitors. Hong Kong's economy is heavily dependent on tourism and services and the government has been moving steadily to bring back business without sparking new outbreaks in the densely populated city of 7.5 million.

Hong Kong reported seven new cases on Friday for a total of 5,056, including 104 deaths, according to China's National Health Commission. Mainland China reported eight new cases, all brought from outside the country.

No new cases of local transmission have been reported in 40 days, with the death toll remaining at 4,634 among 85,322 cases recorded since the virus was first detected in the central Chinese city of Wuhan late last year.

— The UN is trying to help more than 300,000 merchant mariners who are trapped at sea because of coronavirus restrictions. One captain described the desperation of seafarers who've been afloat for a year or more, and the importance of their profession to transporting food and medicine around the world.

He pleaded their case Thursday at a UN-organized meeting with shipping executives and government transport officials.

The captain was stuck for an extra three months at sea as the pandemic washed over the world and made shipping crews unwelcome in many ports. It's still complicated to change crews because of border closures and limited flights.