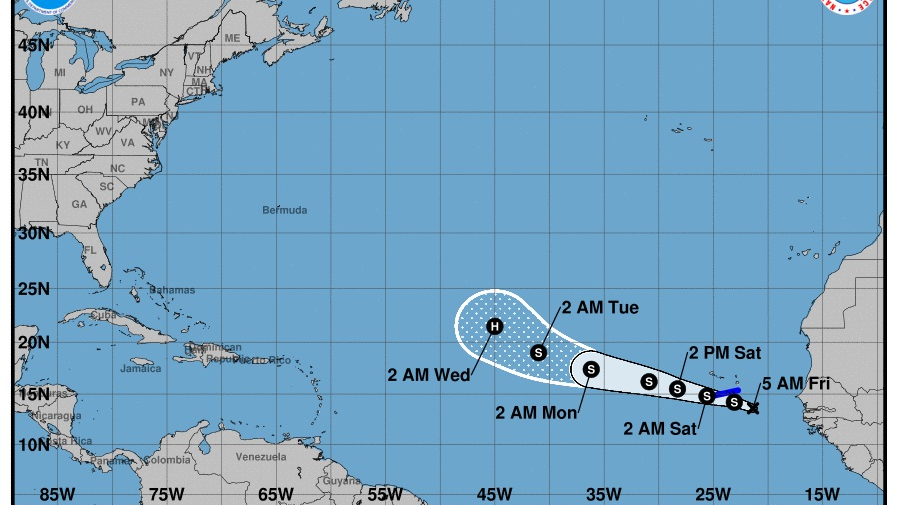 The US National Hurricane Center is monitoring a developing weather system which has a 90 percent chance of developing into a tropical cyclone within the next few days.

In an update shared early Friday morning, the NHC said the system is currently about 190 miles east-southeast of the Cabo Verde Islands, and is projected to travel west-northwest across the Atlantic.

The storm is still several days away from the Caribbean and Gulf of Mexico and the public is advised to monitor official weather updates for information.

Details are as follows:

SUMMARY OF WATCHES AND WARNINGS IN EFFECT:

A Tropical Storm Warning is in effect for...
* Cabo Verde Islands of Santiago, Fogo, and Brava

A Tropical Storm Warning means that tropical storm conditions are expected somewhere within the warning area, in this case within the next 12 to 24 hours.

For storm information specific to your area, please monitor products issued by your national meteorological service.

On the forecast track, disturbance is expected to move near or over the southern Cabo Verde Islands as a tropical storm later today and tonight.

Maximum sustained winds are near 35 mph (55 km/h) with higher gusts. Strengthening is forecast during the next several days, and the disturbance is expected to become a tropical storm later today or Saturday.

Storm drifts away from Hawaii after 'almost biblical' rains