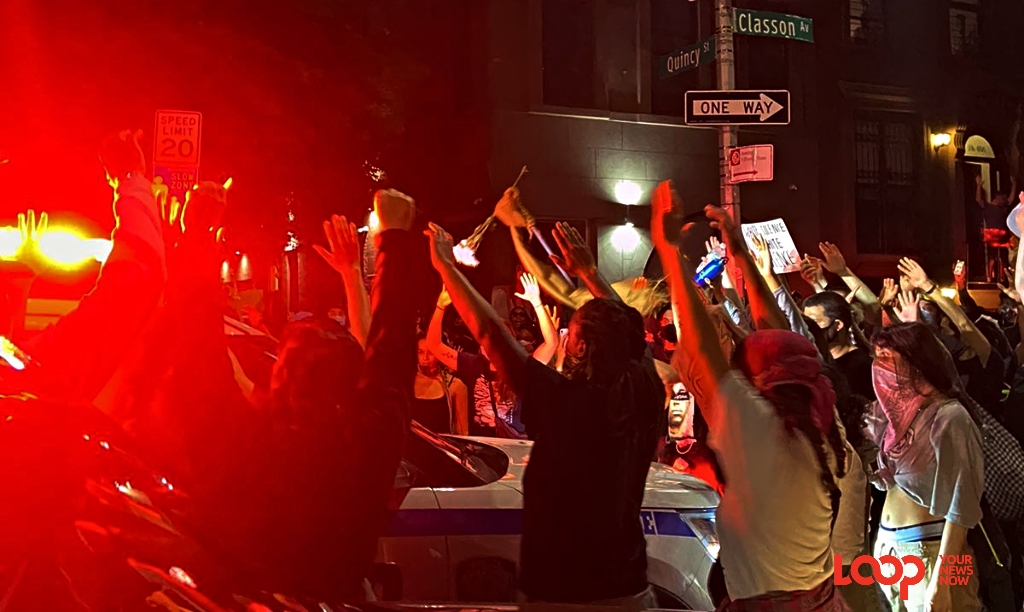 Hands up and chants of "George Floyd". This photo was taken by Sam

Taking to the streets for the second time after yet another incident of police brutality in the United States, one Bajan-American has no regrets about adding her voice to protests for justice.

Sam Patrick*, 27, a student at Brooklyn College was outside the Barclay's Centre at Atlantic Avenue in Brooklyn, New York, after work last night (May 29).

Accompanied by her Barbadian boyfriend who went to visit her in early March and has since been stuck there because of the COVID-19 pandemic, they arrived at 7.30 pm and left around 10 pm.

Loop asked Sam what was going through her head on her way to the protest and how she felt while there. She said: "I was nervous but fired up. The raised voices and solidarity was beautiful."

But then the atmosphere changed close to 10 pm.

"I became very scared when the cops in riot gear showed up and I saw them throw something, possibly tear gas, into the crowd. I left soon after." Watching the news after they took their exit, on television she witnessed the actions of the police in riot gear as they got physical with people standing in the place she had not too long vacated.

This time, the protests which have erupted across the United States were motivated by the murder of a black man George Floyd in Minnesota. One white ex-police officer who was seen in a video holding his knee down on Floyd's neck for eight minutes until he died, has been fired since the protests commenced this week.

Sam was born in America and moved back from Barbados nine years ago. Her mother and grandparents are Bajan.

Asked about what life is like in New York, she said:

"It pains me to say, but I’ve gotten used to the racial dynamics here. My presence is always questioned in majority-white spaces. I’ve been called nigger to my face. I’m always terrified when police are nearby. I worry it could happen to me or someone I know."

Talking about the first time that she pulled up on a black issue, as Barbadian singer Rihanna has urged, Sam said:

"I marched against police brutality in winter weather in 2017 and I try to show up whenever I’m aware that there’s a protest happening.

"I’ve been angry and heartbroken and aching to do something. I feel like most Black people that live out here. We are just exhausted and sick of things never changing. Until the next wave of elections, the only way to let our rage out is to shout George Floyd’s name in the streets and demand justice and burn sh** down."

Sam echoed the sentiments being expressed and displayed in the newscasts that hitting the streets and pavements for this cause are a plethora of colours, races and classes. "There were a lot of non-Black protestors and onlookers cheering in solidarity. It showed me that people in general are tired of America’s crap.

"We’re tired of a law enforcement that doesn’t de-escalate, but executes. And we’re tired of the system that protects them. That’s why I came out. And if George Floyd’s murderer doesn’t get the sentence he deserves, we will hit the streets again."

Editor's Note: Sam Patrick is an alias used to protect the identity of the Bajan-American interview.