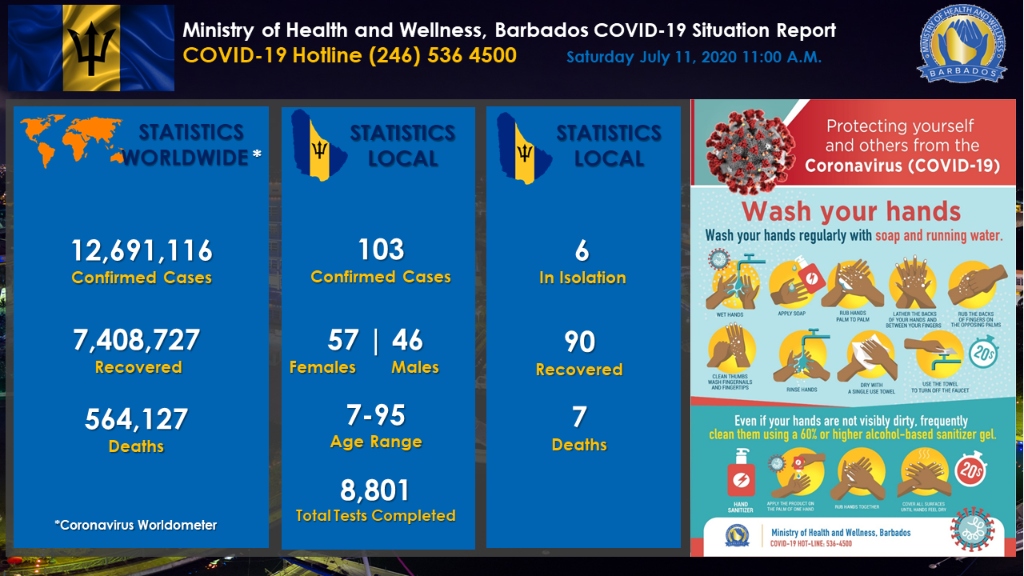 Barbados retested passengers who arrived from New York, a COVID-19 hot spot, and five previously COVID-negative patients have tested positive for the virus.

These five imported cases bring the total locally to 103 since the first two cases on March 16.

Related article :Persons quarantined with worker who test positive will not be retested

Barbados now has a twice-negative COVID test rule in place for persons arriving in Barbados from high-risk areas.

Having picked up these new cases by way of this rule, the Health Minister believes it is indeed paying dividends for the Ministry of Health and Wellness.

Minister Lt Col Jeffrey Bostic announced today (July 11) that while only one person tested positive last Saturday for the virus that has developed into a global pandemic, last evening (July 10), five of those who tested negative last Saturday are now testing positive.

These persons would have been in quarantine, as mandated by the Ministry, and constantly monitored.

Their positive testing suggests that the virus would have been contracted prior to arriving in Barbados, but would not have developed to the point where it was manifested in the initial test.

Minister Bostic said this was precisely what local health authorities had been warning about. The disease takes up to 14 days to present itself in the PCR test used by local authorities. Therefore, the Barbados authorities instituted a mandatory second test for all persons arriving from high-risk areas, such as the United States, Brazil and other parts of Latin America and Eastern Europe.

“I believe these discoveries today are tribute to the excellent monitoring mechanisms put in place by the authorities in the Ministry of Health and Wellness. In several countries around the world, a negative PCR test is a negative COVID test. For us here in Barbados, if you have come from a high-risk area, a negative COVID-19 test on arrival is but the first hurdle. You have to obtain a second negative test within five to seven days before you can be given the all-clear to go out into the society,” Minister Bostic said.

Barbados’ total cases are now over the 100-case threshold. There are now 103 persons who would have tested positive for the COVID-19 virus since March 16. Of these, 90 have recovered fully, seven have died, and a total of six are currently in isolation.

A total of 115 passengers arrived on the flight last Saturday. Ninety-five retests were done yesterday, and the rest are being completed today.

A total of 146 tests were conducted yesterday, bringing the number completed by the public health laboratory to 8,801.

Life interrupted: Parents on returning to work during COVID-19