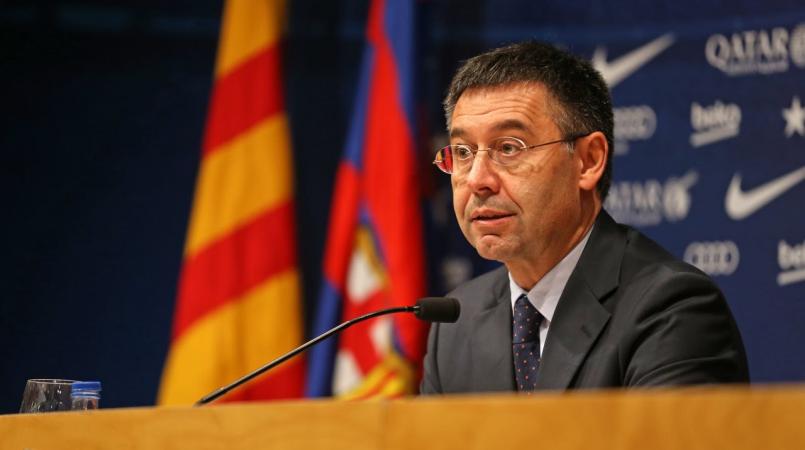 Josep Maria Bartomeu has resigned as president of Barcelona.

The LaLiga club announced on Tuesday that Bartomeu and the entire board of directors have chosen to step down with immediate effect following a meeting.

Bartomeu had insisted on Monday there was no reason for him to resign ahead of a vote of no confidence against his leadership, which was expected to be held at Camp Nou this weekend.

However, the 57-year-old has changed his mind due to the ongoing institutional problems at the club and the risk of possible exposure to coronavirus that Barca members would face if they went to vote.

In a statement read out on Tuesday, Bartomeu announced: "I am communicating my resignation from the position of president, along with my entire board of directors."

The news marks the end of a turbulent era at one of the world's grandest football clubs.

Bartomeu, previously a leading figure for Barca's handball and basketball section and then vice-president of sports, was first elected president in 2014 after predecessor Sandro Rosell resigned as legal proceedings were opened into allegations of misappropriated funds relating to Neymar's transfer a year earlier.

Barca enjoyed huge success in Bartomeu's first year, winning the treble under head coach Luis Enrique in 2014-15 - the last time they lifted the Champions League trophy - and Bartomeu won re-election that year with 54.63 per cent of the vote.

He then introduced a "Strategic Plan" for the period 2015 through 2021, "with the objective of making Barca the most admired, beloved, and global sports institution, a plan which includes an annual revenue goal of €1billion by 2021".

Bartomeu also won backing for the Espai Barca project, an ambitious plan to renovate Camp Nou and its surroundings, and construct brand new facilities for training and Barca's other competitive sports teams.

Barca won the domestic double in 2015-16, as well as the UEFA Super Cup and Club World Cup, before lifting the Copa del Rey in 2016-17 in Luis Enrique's final season in charge.

However, concerns were by this point growing over the club's transfer policy, as huge investment in the playing squad failed to arrest a steady decline in the team's fortunes, and Neymar's €222million transfer to Paris Saint-Germain in 2017 provoked further frustration.

Ernesto Valverde took charge and delivered two further LaLiga titles and a Copa del Rey, but humbling Champions League exits at the hands of Roma and Liverpool prompted scrutiny both of the coach's methods and the sporting project overseen by Bartomeu.

When 2019-20 ended with no trophies and a humiliating 8-2 loss to Bayern Munich in the Champions League, calls for Bartomeu to step down before next year's elections grew louder, with tensions between the board and playing squad reaching a critical point when captain Lionel Messi attempted to leave the club.

Messi eventually stayed but accused Bartomeu of going back on a promise that the six-time Ballon d'Or winner would be allowed to leave if he wished, describing the running of the club as "a disaster".

A motion against the incumbent president passed the threshold of 16,250 member votes on October 8, forcing the club's board to set a date for a vote of no confidence that will no longer be necessary.

Rumour Has It: Messi may extend Barca stay, PSG closer to Neymar deal