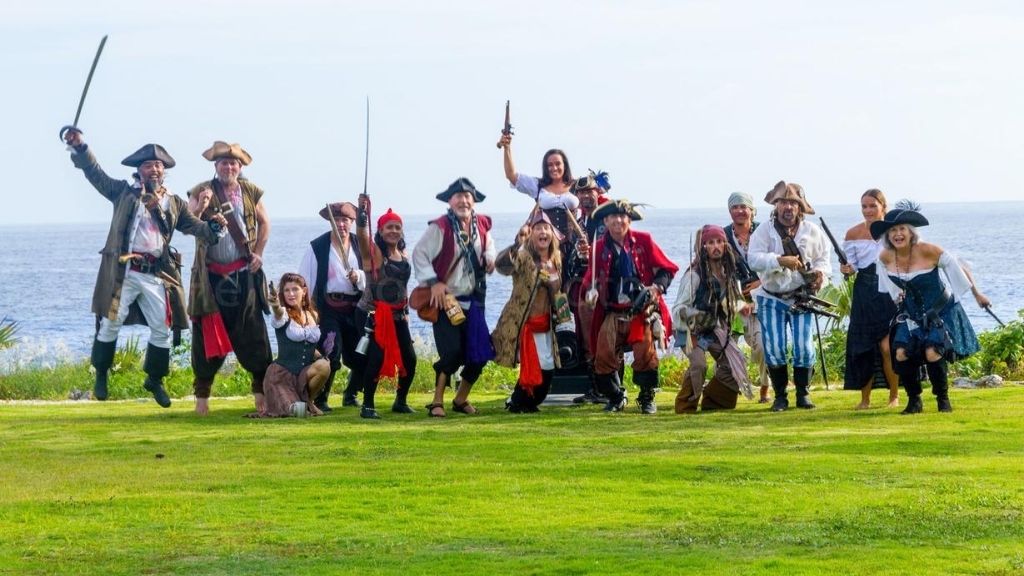 What do you suppose it would look like if an 18th Century Pirate woke up in the year 2020?

'The curse of 2020- Las Tortugas Pirates,' is the story of a group of boisterous buccaneers who did just that.

Set on the property of Pedro St. James, the oldest existing building in the Cayman Islands, two carousers— Captain Wes (Orneil Galbraith) and Andrea "AJ" Iallorenzi— have had way too much grog. The last thing Iallorenzi remembers is having a swig out of a bottle marked 'Corona' and that's where the story begins...

Created under the fearless leadership of Captain Wes (Orniel Galbraith), the videography of Helen Jones and the production of Andrea "AJ" Iallorenzi, this group of seafaring scoundrels does a wonderful job of tastefully making light of a period in time when many Caymanians are not in the best of spirits.

"We wanted to make people laugh," said Captain Wes of the primary intention of the video.

If you've seen this group you'd be sure to remember them. Founded in 2006, Las Tortugas Pirates have been the main attraction at Cayman's International Pirates Week event held every November for the past decade and are well-known for sparing no effort in their elaborate representation of a group of cunning swashbucklers. From their garments to their accoutrements, you would swear you are on the set of Pirates of the Caribbean.

Self-described as ambassadors of Cayman's rich heritage, the group is aptly named after Christopher Columbus’ 1503 reference to Little Cayman and Cayman Brac, after he sighted numerous sea turtles swimming in their surrounding waters.

When not enjoying a bottle of rum, searching for buried treasure, making scallywags walk the plank or attending global pirate festivals, Las Tortugas Pirates organize charity events and community programs that bring out the lighter side of Cayman heritage.

"My grandmother used to take me to Pirates Week and I'd hide behind her skirt," chuckles Captain Wes (Galbraith) at the irony of having become one of the biggest fixtures on the global pirate scene.

This immersive pirate subculture has become "a thing" all over the world.

Members take on a pirate alter ego, embracing "pirate talk" and pirate names. According to the Las Tortugas crew, it is a fun escape from the mundane-- a unique and enjoyable way to party.

"It's my culture. I live for it," says Captain Wes.