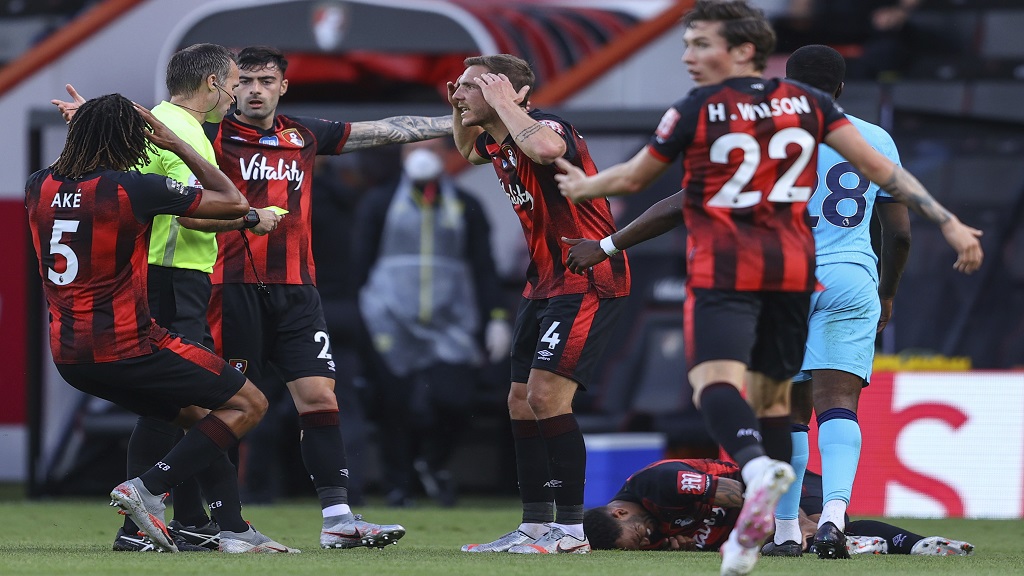 Bournemouth players argue with the referee during the English Premier League footall match against Tottenham at the Vitality Stadium in Bournemouth, England, Thursday, July 9, 2020. (Richard Heathcote/Pool via AP).

Bournemouth had a 90th-minute goal ruled out for handball and had to settle for a 0-0 draw on Thursday against a lackluster Tottenham, which failed to have a shot on target against the Premier League’s worst defense since the restart.

Callum Wilson appeared to have scored a potentially match-winning overhead kick and was mobbed by teammates, only for VAR to spot that the shot glanced the arm of strike partner Josh King on the way into the net.

In an even later chance for the hosts, during the 12 minutes of second-half stoppage time owing to a serious-looking injury to Bournemouth defender Adam Smith, Tottenham goalkeeper Hugo Lloris rushed off his line to block a shot by Harry Wilson.

Tottenham didn’t come close at all in the latest soporific display under Jose Mourinho, whose team’s chances of qualifying for next season’s Champions League grew fainter.

Tottenham are in ninth place, nine points behind fifth place Manchester United. Mourinho’s side is only two points behind Sheffield United in seventh place, which could secure Europa League qualification, and play Arsenal in the north London derby on Sunday.

Smith was carried off on a stretcher after an apparent clash of heads with Tottenham's Ben Davies.

Long season catching up with Wolves as Liverpool, City win