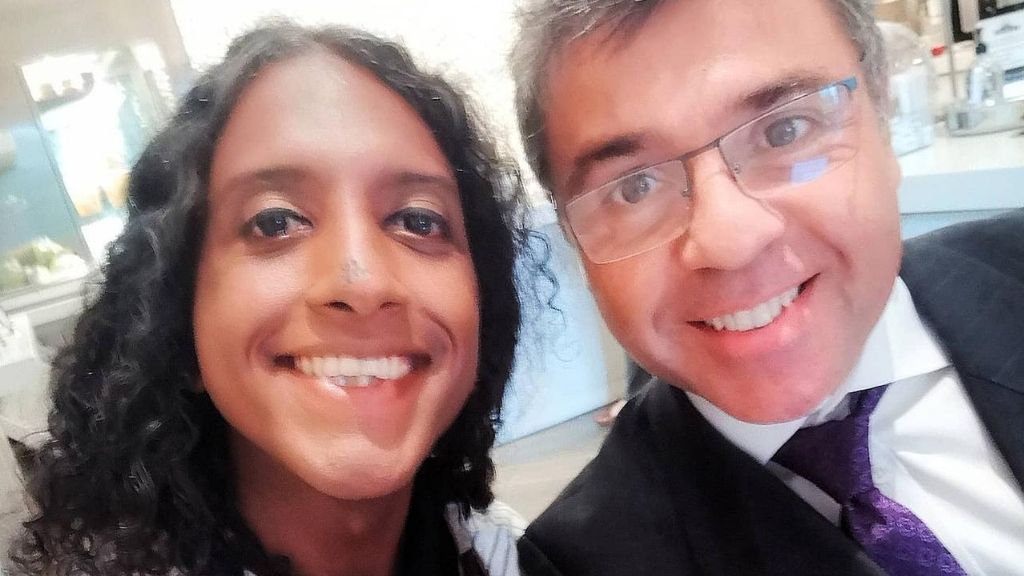 "Just came out of a very productive meeting with the Cayman Islands Government to discuss the proposed Domestic Partnership Bill," said Billie Bryan, the founder of LGBTQ advocacy campaign, Colours Cayman, in a Facebook post that appeared alongside a happy selfie with legal counsel, Leonardo Raznovich, yesterday.

The Domestic Partnerships Bill 2020, which provides for the "issue of a licence to enter into a domestic partnership" granting same-sex domestic partners with formal legal protection similar to a married couple, has been open to public consultation for the past month and will be debated at the Legislative Assembly on Monday.

In a public statement issued by government last month, it acknowledged the Appelate court's observation that "it was apparent for several years that there is an obligation to provide such a framework" of legal protection to same-sex domestic partnerships in the Cayman Islands, which is functionally equivalent to marriage, "and that the failure to do so was “woeful”. The court observed that this failure of the Legislative Assembly is a continuing violation of Article 8 of the European Convention on Human Rights."

"While Colours Cayman is still pushing for complete marriage equality, we're happy to report that the Cayman Islands Government met today with our organisation and has agreed to take our suggested amendments to the bill into consideration. The fight is far from over but make no mistake, this is a significant step forward," said Bryan in a post on the Colours Cayman Facebook page.

In a public statement, which was issued by Colours Cayman yesterday, July 23, the group said

In our conclusion, while the draft Bill goes a long way towards complying with the Court of Appeal requirement for a legal framework functionally equivalent to marriage, it falls short in a small but significant number of very important legal aspects. In an effort to resolve these issues and responding to public consultation, Colours Cayman sent its recommendations to the Government last week. Since then, the government has actively engaged with Colours Cayman. After a productive meeting this week, we are pleased to report that our legal concerns have been taken into account and changes to the Bill will be implemented accordingly.

Of course, the government’s preferred option of domestic partnerships rather than marriage is disappointing to many, to say the least, including Colours Cayman and we note that the Court of Appeal made it very clear that there is, contrary to popular belief, no prohibition in the Constitution preventing the legislator to extend marriage to same sex-couples.

Colours Cayman will continue to pursue the same rights with the same name. However, our organisation does believe in the rule of law and has respect for decisions of the Cayman Islands courts. Whichever side of the fence one is on, Colours Cayman will always be, above all, on the side of respect for the rule of law. This is why Colours Cayman respects that the decision must be followed. Hence, Colours Cayman supports the Bill, to the extent that the legal framework thereby introduced is, in the end with the agreed amendments, functionally equivalent to marriage and urges the Members of the Legislative Assembly to support the Bill next week.

Elsewhere in the region

Elsewhere in the region, the topic of same-sex unions has also recently come to the fore.

In Barbados, where same sex intimacy continues to be punishable by "life imprisonment", the government recently came under fire for extending a 12-month remote worker visa program to spouses-- which it specifically defined as a man and a woman. On July 21 Prime minister, Mia Mottley addressed the outcry in parliament and the language used on the application has since changed. Prime Minister Mottley responded, "This country that has been forged, regrettably, in the bowels of discrimination can not now want to discrimate against anybody for any reason. All must breathe.’ She also stated, "This is a country that recognizes unions other than a marriage. More than 70% of the people born in this country come from unions other than a marriage." There is some hope that the issue of same-sex marriage will be addressed under Minister Mottley's leadership.

In Haiti, where same sex unions have never been legally recognized and where a bill to ban same-sex marriage was approved by senate in 2017, a penal code that sets forth penalties for officiants who refuse to perform same-sex weddings is set to go into effect in 2022.

On May 26, Costa Rica became the first Central American country and sixth Latin American country, to legalize same-sex marriage. Human Rights Watch has said of this decision that "Costa Rica’s laudable vindication of the rights of same-sex couples has regional significance. It represents a profound respect for the country’s international obligations and the institutions to which it is a party."

Kim Burrell under fire for comments about gays and lesbians