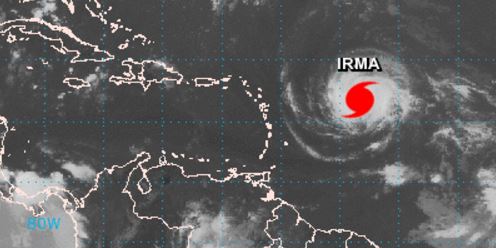 Workers in the northeast Caribbean cleared drains and pruned trees as authorities urged islanders to prepare for Hurricane Irma, a Category 3 storm that grew stronger Monday and was forecast to begin buffeting the region the following day.

Emergency officials warned that Irma could dump up to 10 inches (25 centimeters) of rain, unleash landslides and dangerous flash floods and generate waves of up to 23 feet (7 meters) as the storm draws closer.

"We're looking at Irma as a very significant event," Ronald Jackson, executive director of the Caribbean Disaster Emergency Management Agency, said by phone. "I can't recall a tropical cone developing that rapidly into a major hurricane prior to arriving in the central Caribbean."

Irma is expected to strengthen in the next couple of days, and its center is forecast to move near or over the northern Leeward Islands on Tuesday night and early Wednesday, according to the U.S. National Hurricane Center.

A hurricane watch was in effect for Puerto Rico, Vieques, Culebra, the British and U.S. Virgin islands and Guadeloupe. A tropical storm watch was issued for Dominica.

U.S. residents were urged to monitor the storm's progress in case it turns northward toward Florida, Georgia or the Carolinas.

"This hurricane has the potential to be a major event for the East Coast. It also has the potential to significantly strain FEMA and other governmental resources occurring so quickly on the heels of Harvey," Evan Myers, chief operating officer of AccuWeather, said in a statement.

In the Caribbean, Antigua and Anguilla shuttered schools on Monday, and government office closures were expected to follow.

On the tiny island of Barbuda, hotel manager Andrea Christian closed down the Palm Tree Guest House as Irma approached. She said she was not afraid even though it would be her first time facing a storm of that magnitude.

"We can't do anything about it," Christian said by phone, adding that she had stocked up on food and water. "We just have to wait it out."

The U.S. hurricane center said Irma had maximum sustained winds of 120 mph (195 kph) Monday afternoon. The storm was centered about 530 miles (850 kilometers) east of the Leeward Islands and was moving west-southwest at 14 mph (22 kph).

"It's no secret that the infrastructure of the Puerto Rico Power Authority is deteriorated," Rossello said. He activated the National Guard, canceled classes for Tuesday and declared a half-day of work.

Meteorologist Roberto Garcia warned that Puerto Rico could experience hurricane-like conditions in the next 48 hours.

"Any deviation, which is still possible, could bring even more severe conditions to Puerto Rico and the U.S. Virgin Islands," Garcia said.

The U.S. Virgin Islands said schools would reopen on Friday instead of Tuesday.

In the Dominican Republic, Public Works Minister Gonzalo Castillo said workers there were also clearing away roadworks and cleaning out sewer drains and that President Danilo Medina would meet with emergency agencies.