Carnival Batabano: Route, road closures & everything you need to know 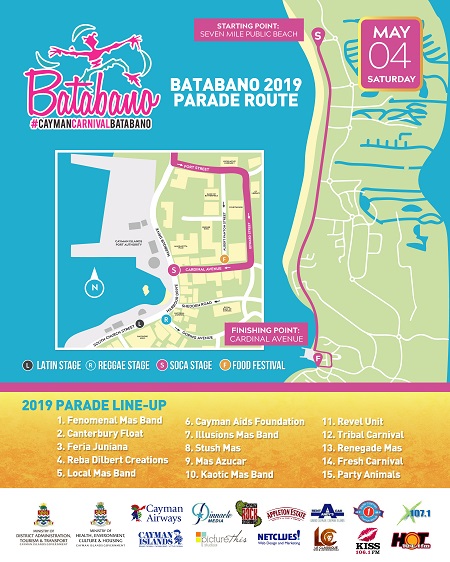 The Cayman Carnival Batabano Committee has announced that there will be 15 masquerade bands, groups, and floats in the Batabano parade this Saturday (May 4), with up to 4,000 masqueraders anticipated this year.

Cayman Aids Foundation will have a king costume in the parade again this year, and there will also be costumes by Cayman’s longest-serving costume designer, Reba Dilbert.

The 2018 Batabano Band of the Year, Tribal Carnival, said they have doubled in size for 2019, with more than 400 masqueraders expected in their band for Saturday.

"We couldn't be more elated with the tremendous support that Batabano continues to receive from local Mas Bands and masqueraders, as well as from local and international groups who are eager to be part of this 36-year carnival tradition in the Cayman Islands," said Batabano Chairperson, Donna Myrie-Stephen.

"This year's parade will be one of the biggest in the history of carnival in Cayman, and we invite all residents and visitors on the island to come out and experience it."

The Batabano Committee also this week released the line-up of the masquerade bands in order of their appearance in the parade.

Per tradition, the Batabano parade starts at the Seven Mile Public Beach at 1pm and ends on Harbour Drive in the heart of George Town.

The parade will take its usual route down Fort Street and pass the final judging station in front of the Legislative Assembly and head towards the main Post Office. However, this year the parade will turn down Cardinal Avenue in order to position masqueraders right on Harbour Drive where the free "Last Lap" street dance will take place immediately following the parade.

The much-anticipated Batabano Food Festival will therefore be on Albert Panton Street this year instead of Cardinal Avenue.

Following the parade, the public is invited to come out and enjoy the free Last Lap street dance from 6pm until Midnight, which will feature 12 local, regional, and international DJ's on three stages with three genres of music - the Soca Stage playing the latest and greatest Soca favourites, the Reggae Stage, and the Latin Stage playing a variety of Latin music throughout the evening.

There will also be a bar in each area to better serve event patrons.

The RCIPS is informing the public about the following road closures taking place over the next two weekends in order to facilitate events for Cayman Carnival Batabano.

Harbour Drive will be closed between Shedden Road and Fort Street (with access to the Port Authority entrance for Port staff).

Cardinall Avenue will be closed just west of the junction with Albert Panton Street.

Albert Panton Street will be closed.

West Bay Road will be closed between the junction of the Esterley Tibbets Highway and Duke’s restaurant from 12pm. Only local access will be granted north of Lime Tree Bay Avenue during this time.

The parade will proceed south along West Bay Road from 1:00PM and road junctions will be closed ahead of the parade as it proceeds.

As the procession passes closed junctions, these will be re-opened to afford motorists the use of the road to the rear of the procession.

The procession will continue past North Church Street, onto Harbour Drive, turn onto Fort Street, then onto Edward Street, and will end on Cardinall Avenue.

Note: The Your Choice Campaign has partnered with the National Drug Council and Websters Tours to provide free bus transportation for persons participating in the Batabano Parade and Last Lap Fete on Saturday, May 4. The buses will leave from the George Town Town Hall at 12:30am and provide transportation to West Bay and the Eastern Districts.

In addition to Albert Panton Street, Harbour Drive and South Church Street will be closed between Boilers Road and Fort Street (with access to the Port Authority entrance for Port staff).

Cardinall Avenue will also be closed.

Elgin Avenue will be closed between Hospital Road and Claude Hill Road (formerly Humber Lane) from 1:30pm until 6:30pm.

Officers will be closing sections of these roads ahead of the parade and reopening them once the parade passes. Motorists are asked to exercise caution in these areas on Saturday evening.

In pictures: Carnival in Jamaica 2019