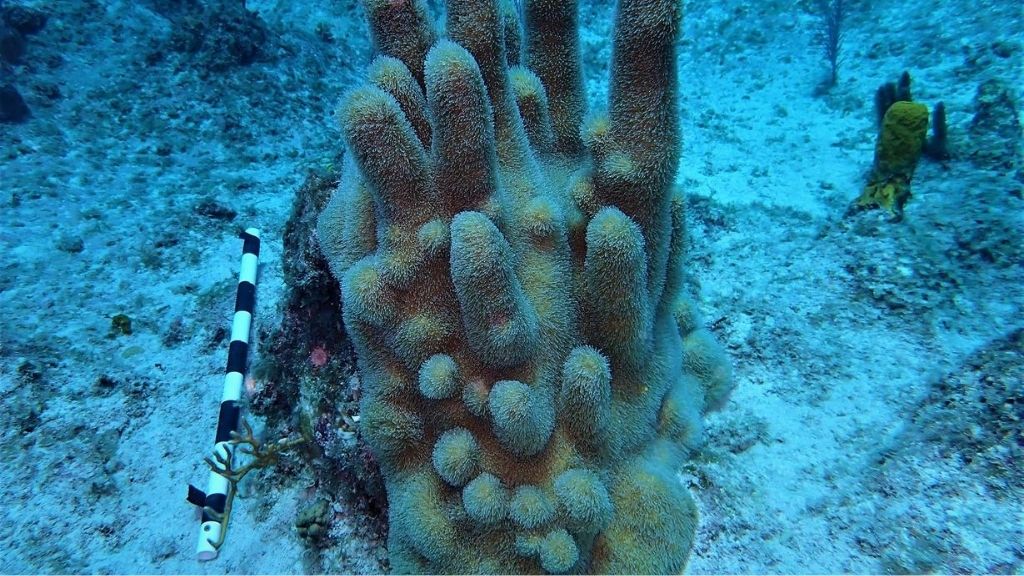 They referred to the discovery of the rare species as "encouraging."

This type of coral is currently listed as Vulnerable on the IUCN's Red List but is recognized as being rare in many locations, such as the Cayman Islands where the few known colonies are widely dispersed around all three islands. Pillar Coral is protected under the Endangered Species Act (USA) and listed as vulnerable in the Caribbean on the IUCN Red List of Threatened Species. It is a rare sight to see in the Cayman Islands.

PillarCoral, like most corals, is susceptible to rising seawater temperatures, increasing ocean acidification, intensifying storms, sea-level rise, and changes in precipitation that will be brought on by climate change. It has also been found to suffer badly from coral disease outbreaks in other countries (and in Cayman) in the past.

Pilar coral is an evolutionarily distinct coral species (it is the only species in the genus Dendrogyra). Unusually among hard corals, pillar coral extends its polyps to feed during the day which, along with its distinctive 'pillar' shape, makes it easy to identify on the reef-- if you are lucky enough to find any of this uncommon coral. It is very encouraging to find previously unknown and young colonies here on Grand Cayman.

The video above comes from the YouTube page of the Ocean Frontiers Dive Shop in Grand Cayman and was filmed by Elly Wray. According to Ocean Frontiers, "Pillar Corals are the Fish Fairy Princess Castles of the tropical seas. Rare to see and always a treat to stare at their texture and the life that lives around them. These corals are very fragile and must not be touched. This Pillar Coral is located at the dive site called 'Fish Tank', on the East End of Grand Cayman. Pillar Coral can be found on only a few other dive sites in the Cayman Islands."

If you are out diving and come across any Pillar Coral please let the DoE know by posting on the Cayman Coral Watch Facebook page. And please remember to keep an eye out for Stony Coral Tissue Loss Disease while you're under water. Pillar coral are one of the species especially susceptible to this disease.