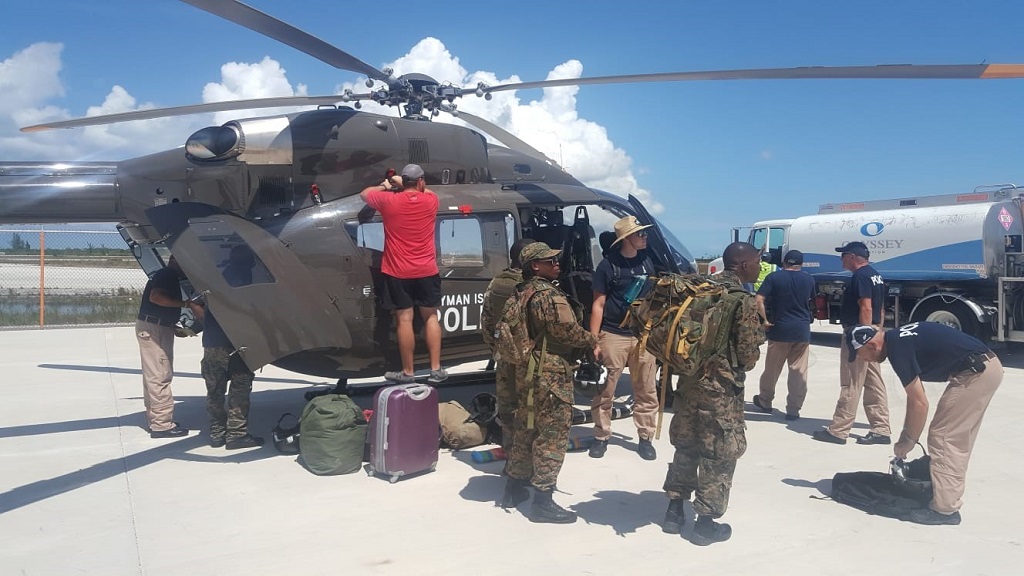 The Royal Cayman Islands Police Helicopter has returned to Cayman after providing essential support to the Hurricane Dorian-ravaged islands of Abaco and Grand Bahama.

During the six-day deployment, the X-ray One team flew 42 missions from Nassau to the affected Islands, and carried 125 passengers including eight young children and 20 adult evacuees. They shipped desperately-needed kit including tarpaulins and communications equipment to many inaccessible locations.

They worked with the Bahamas Defence Force, UN agencies, the British military and the British High Commissioner and her team to deliver vital aid, conduct reconnaissance, deliver specialist personnel and evacuate vulnerable people from the worst affected areas.

The importance of the team’s efforts have been praised by many including the Royal Bahamas Defence Force Commander, the World Food Programme (WFP), the Caribbean Disaster Emergency Management Agency (CDEMA) and the Overseas Territories Minister, Lord Ahmad.

His Excellency The Governor, Martyn Roper, The Honourable Premier, Alden McLaughlin, and the Honourable Deputy Governor, Franz Manderson were at Owen Roberts International Airport to welcome the team home Wednesday (Sept 12) and to express their thanks for the amazing job they’ve done.

In a joint statement, the Governor and Premier highlighted the importance of the Air Operations Unit, not only to Cayman, but to the region, and announced the planned delivery of X-Ray One’s new sister aircraft.

They said: “The contribution that the RCIPS has been able to make to relief efforts in the Bahamas on our behalf is something that Cayman can be proud of. Their impact on the ground was immediate and substantial.

“We were particularly struck by the smiling faces of the children they rescued from such terrible conditions.

“The Air Operations Unit provides a vital service at home and enables us to support those in need overseas, whether they are our fellow Overseas Territories or independent states in the region.

“The decision to purchase a second H145 helicopter to provide resilience and further enhance this capacity has been announced previously but we are delighted to confirm that the purchase arrangements are now in place with Airbus Helicopters and the new helicopter will be delivered in December this year.”

British High Commissioner to the Bahamas, Sarah Dickson added: “Within hours of Hurricane Dorian passing, the Cayman Islands Government offered the RCIPS helicopter to the people of The Bahamas and they have been such a valuable resource. They’ve flown numerous sorties in to the field collecting evacuees, delivering supplies and providing a whole range of agencies with the opportunity to view the damage in order to support the relief effort.

“The devastation is extensive and truly shocking. But the crew of X-Ray One, as I’ve now come to know them, are old hands from Hurricanes Maria and Irma and approached the job with professionalism and a quiet calm that has been invaluable.

“The last two weeks will be firmly etched on my mind for a long time but part of those memories will be the enormous contribution everyone has made and the fantastic teamwork. So thank you Cayman Islands for all your help and support.”

The Air Operations Unit will now be resuming its law enforcement, search and rescue and medical evacuation duties in the Cayman Islands.

Tentative list of the missing in Bahamas has 2,500 names