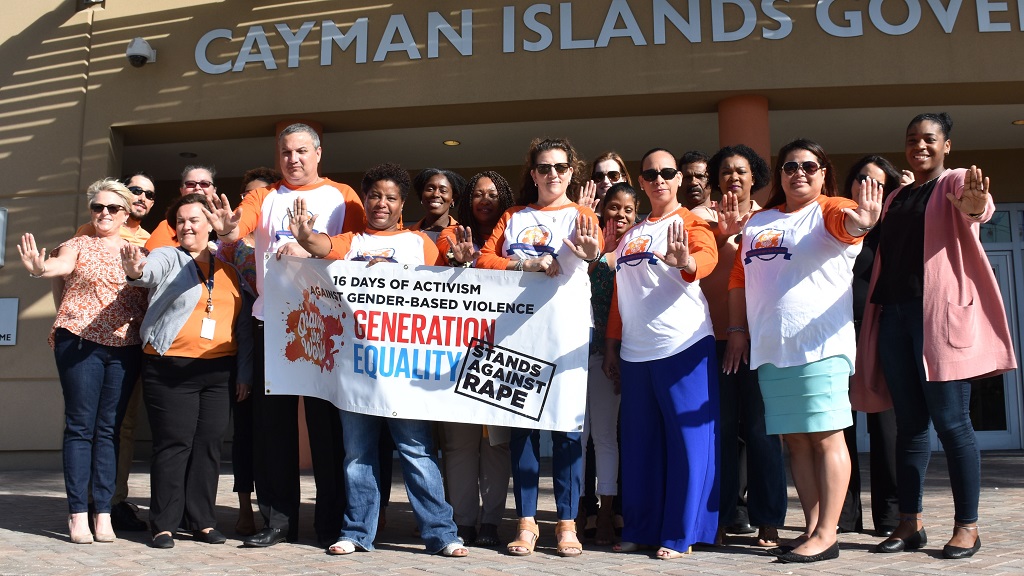 16 Days of Activism Against Gender-Based Violence campaigners held a dress for a cause photo opportunity on Friday, November 29. The event on the steps of the Government Administration Building was to show solidarity in working to eliminate sexual and gender-based violence while supporting victims and survivors.

Supporters of the annual 16 Days of Activism Against Gender-Based Violence (GBV) wore orange at the campaign’s dress for a cause event today (November 29).

All met on the steps of the Government Administration Building to show solidarity in working to eliminate sexual and gender-based violence while supporting victims and survivors.

The theme of this year's observance was: “Orange the World: Generation Equality Stands Against Rape". Members of the local organising committee were staff from the Gender Affairs Unit (GAU), Family Resource Centre and the CI Crisis Centre, Colours Cayman, and the Business and Professional Women’s Club.

They were joined by members of the public and civil servants, including the Deputy Governor and Head of the Civil Service, Franz Manderson.

“The Civil Service has a zero-tolerance policy on sexual and gender-based violence within the workplace,” said Mr Manderson.

“Our Workplace Anti Sexual Harassment policy has been in effect since 2016. In addition, we are now finalising an updated policy to improve the reporting and response to such violations. As a caring employer it is incumbent on us to ensure workspaces are safe, and that all persons regardless of gender are treated with respect and dignity. I encourage civil servants to be compassionate and supportive towards those who may experience sexual violence, to listen to survivors and refrain from victim blaming."

Speaking on behalf of the 16 Days’ organising committee, GAU’s Senior Policy Analyst, Karlene Bramwell added: “Sexual and gender-based violence refers to any act that is done against a person’s will. It also includes threats and coercion. Therefore this can happen to either men/boys or women/girls. Don’t laugh or remain silent at such violence. Silence and humour only normalise and justify sexual violence. Such responses are unacceptable and make it harder for victims to report or seek help.”

Talking more about what the public can do, she added: "As a community we all play a part in creating a certain culture. I encourage everyone to be an active bystander. This means “taking a stand”, intervening to help the person being violated; asking the person if they would like support; documenting the incident; diffusing the situation; or making a clear, firm statement to the perpetrator that such behaviour is unacceptable.”

Ms Bramwell asked the public to further support this year’s campaign by learning more about GBV.

For further information about this year’s campaign, finishing on December 10, view the schedule on Cayman Islands Government Facebook page or email genderequality@gov.ky.