Cayman’s first ever Billfish Rundown awards over $260,000 in prizes 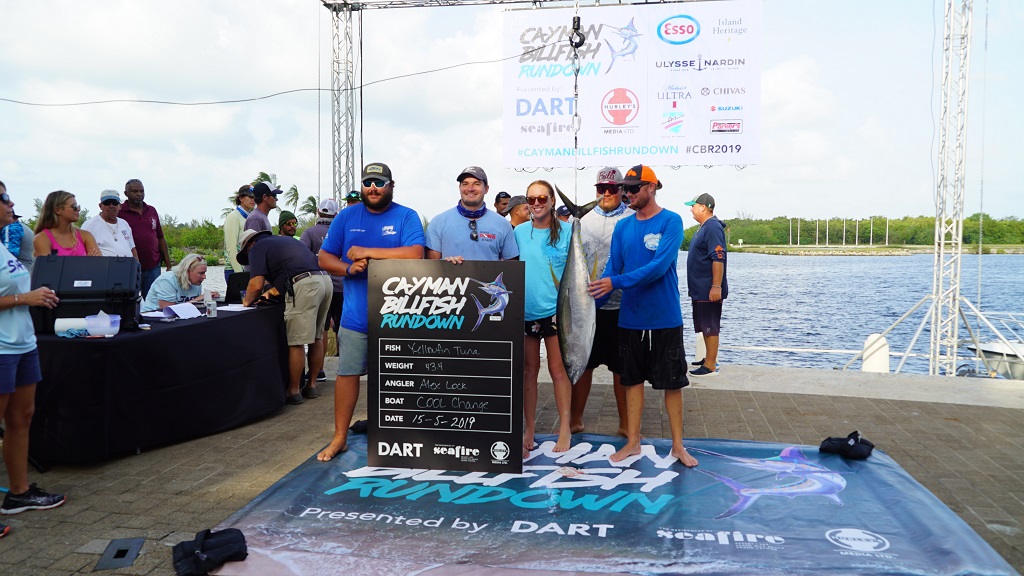 The Cayman Islands’ first-ever Cayman Billfish Rundown awarded more than US$260,000 in cash prizes to 14 teams hailing from both local and international shores.

A total 41 boats entered the tournament with 230 registered anglers, including 41 international anglers and 28 females. Between them, they released twelve Blue Marlins, one White Marlin and one sailfish. A total of 14 yellowfin tuna, five wahoo and six dolphinfish were brought to the scale.

The winning team, ‘Uno Mas’ from Florida, captained by Brooks Smith, released three billfish to win the top prize of US$100,000 for the Most Billfish Release Points and the Captain’s Award of US$10,000 presented to the Captain of the Boat with the Most Release Points.

The team also entered seven additional categories that flexed its billfish skills and rewarded Uno Mas with additional payouts of more than US$16,000, making its total winnings for the tournament close to US$130,000.

Third place for most billfish release was tied, with seven teams earning equal points through catching and releasing a Blue Marlin. Down to time stamps, ‘Suntide’ took home third place and US$20,000, inching ahead of ‘Lazy Lady’ and ‘Trading Time’ by releasing their Marlin 10 and 20 minutes earlier respectively. 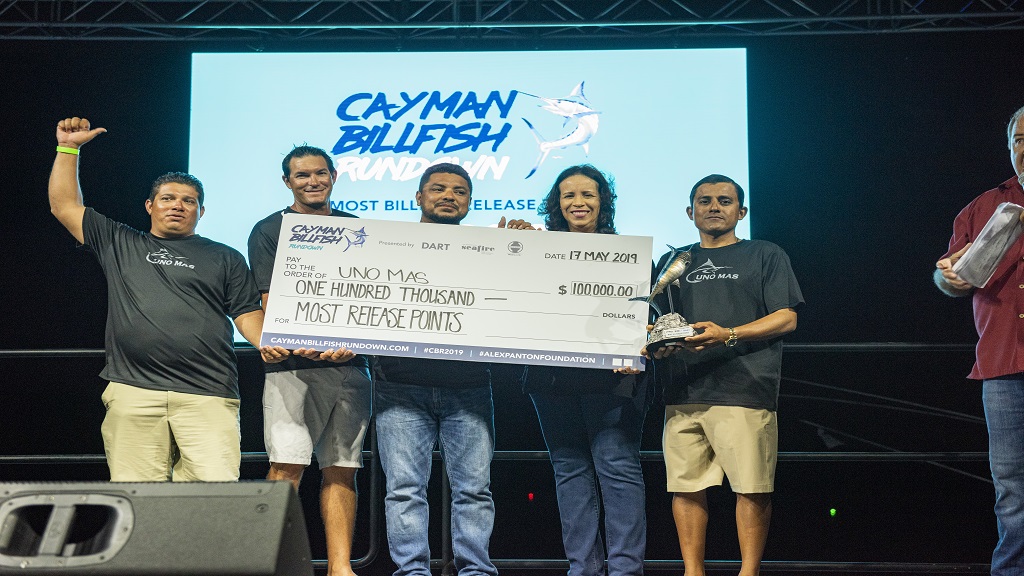 Angler Shaun Bodden from ‘Cool Change’ hooked the heaviest yellowfin tuna, weighing 77.2 lbs, which awarded his team US$10,000 from the guaranteed payout and an additional US$10,000 for entering and winning the ‘Tuna Doubler’ category.

The heaviest wahoo was caught by Baron Jacob from ‘Ecks-Change’ weighing 39.2 lbs. The heaviest dolphinfish was caught by Nathan Ebanks from ‘Reeladdiction’. Both teams won US$10,000 and each team kindly donated U$1,500 to the Alex Panton Foundation, the charity the tournament chose to support.

Anglers were encouraged to donate a portion of their winnings to the Alex Panton Foundation. The foundation’s mission is to improve the mental health of the Cayman Islands’ children and young adults.

The tournament was held from May 14-17 on Grand Cayman, and presented by Hurley’s Media Ltd., Dart Enterprises and The Residences at Seafire.

Managing Director of Hurley’s Media Ltd., Randy Merren said he was pleased with the outcome of the tournament.

He beamed: “It’s incredible to see Cayman Billfish Rundown come to life after a year of planning and preparations. We are grateful for the support from the local and international participants, and based on the feedback received, we expect even higher numbers next year.

“The Cayman Islands as a jurisdiction of choice has so much to offer, and this tournament is no different as it highlights the high professional standard of sport fishing.

"Billfish in particular hold a special place in Cayman Islands sportfishing and for me personally, it was great to bring the action so close to our shores."

Carey Chen brought his experience and expertise as the Official Artist and Tournament Ambassador, taking news of the tournament to global waters. “I’ve been fishing the Cayman Islands since Million Dollar month in the 80s. The offshore fishing is less than a mile from land in the clearest water you can imagine,” Mr. Chen said.

“Cayman Billfish Rundown in its debut is one of the most organized tournaments I have been to and this will only get better."

The tournament also supports responsible fishing and teamed up with Guy Harvey Ocean Foundation, the School of Marine Sciences at University of Maine, and The Gulf of Maine Research Institute in a Tag and Release Program.

Mr Chen explained: “Of all the islands I have travelled to, Cayman takes the most pride in its reefs and ocean by protecting it from pollution and overfishing.

“Looking forward to next year with more boats and even bigger jackpots. I am proud to call Cayman my second home.”

The tag and release programme encourages participants to tag and release undersized dolphinfish, yellowfin tuna, skipjack and bigeye tuna, and ocean whitetip sharks. ‘Conched Out’, captained by Colin Wilson, earned the most release points and were awarded with an Ulysse Nardin CI Limited Edition Watch valued at US$10,000.

The awards dinner and closing ceremony took place on Friday evening at The Crescent in Camana Bay and included a live performance and an impressive display of fireworks. Helping with the presentation of awards, Nicole Spenc, a sportfishing icon from Florida, also thanked sponsors and tournament organisers for welcoming her to the Cayman Islands.

Nicole, who writes an adventure blog and is popular across YouTube and Instagram, said: “The people, the island, everything is so welcoming and I am just blown away! I can’t wait to come back!”