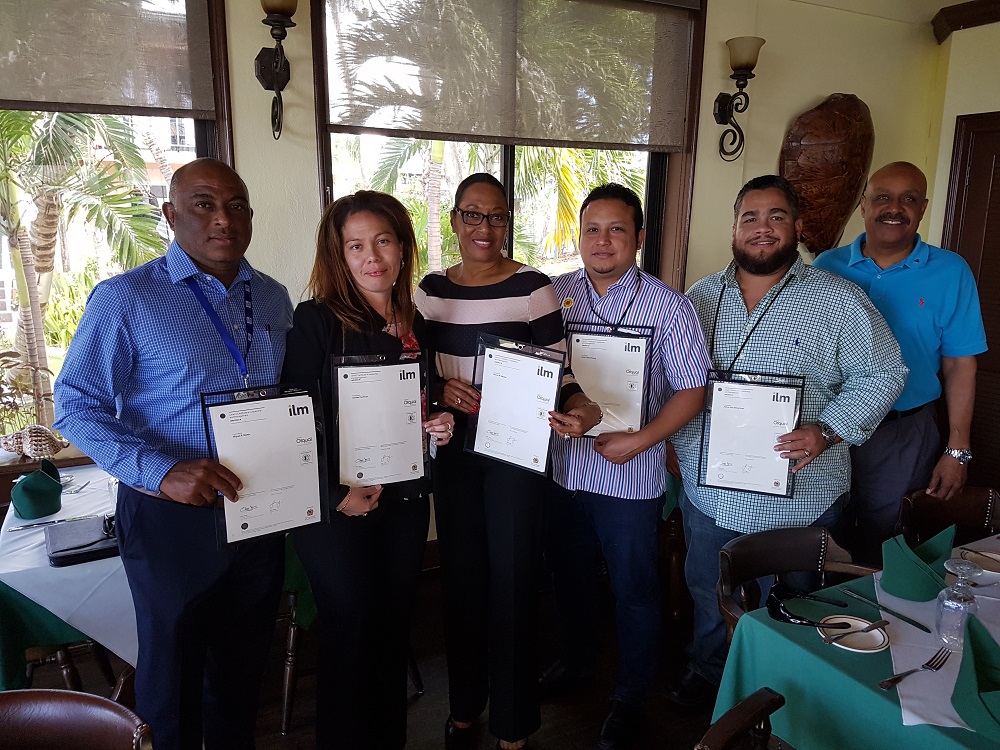 The Cayman Islands Airports Authority (CIAA) hosted a private celebration luncheon on February 23, 2018 and presented five of their employees with Level 3 certificates in Leadership and Management after passing their course of study and assessment from the Institute of Leadership & Management (ILM).

The ILM certificate in Leadership & Management is an internationally recognised certification, providing individuals who are currently in managerial roles or who are looking to move up to the next level of management, skills needed to lead people through organisational change and similar pressures related to these roles.

This course of study is the first milestone in a collaborative relationship, which the CIAA has recently began to develop with the Civil Service College of the Cayman Islands Government in order to make further training like this possible for its staff.

Graeme Jackson from the Portfolio of the Civil Service (PoCS) served as the classroom lecturer and advisor during the course period.

Jackson attended the luncheon and addressed the successful students and reiterated his beliefs that it is critical to have proactive leadership at world-class airports and was pleased that the CIAA recognised the benefits of the ILM certification and encourages the continued support and training of the staff.

The CIAA class consisted of 11 students, including three from CKIA in Cayman Brac. As it stands, five employees have successfully completed the course within a record time of six months. The three students from CKIA were all successful.

In  Anderson’s remarks he thanked  Jackson for his passion, focus and especially his flexibility for being available to the employees after hours for feedback and guidance.

Anderson also recognized the CIAA Human Resources department, stating, “The Department has become very proactive in the Learning and Development programmes, as well as the development and stewardship of personal development plans or “learning maps” for each CIAA employee.” He also thanked the Civil Service College and other partners for this successful initiative and looks forward to the continued collaboration in up-skilling and developing the CIAA human capital assets.