Clearing of sargassum from beaches added to NiCE rosta 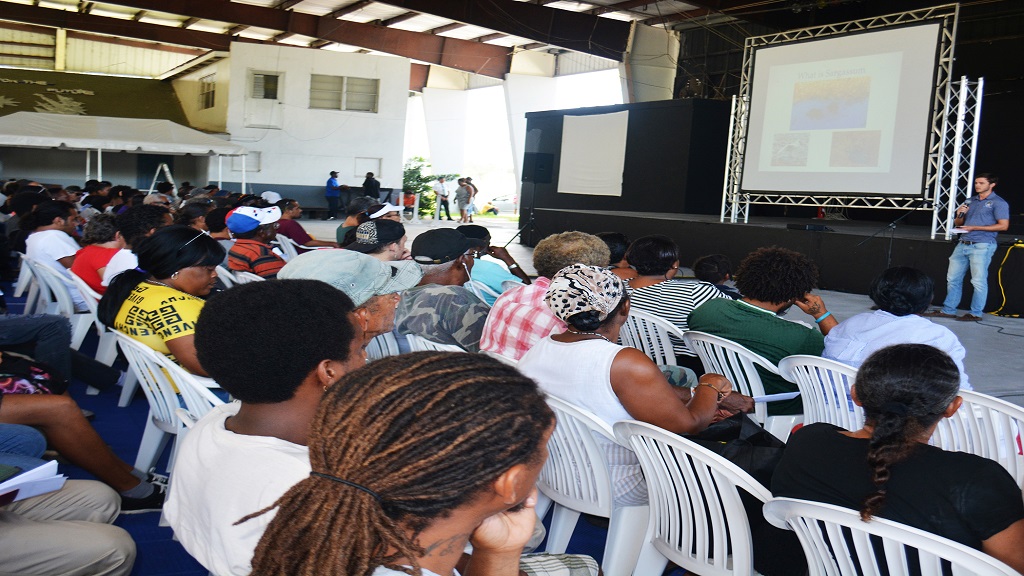 Some 500 unemployed Caymanians and out-of-work spouses of Caymanians are poised to begin two weeks's work for the National Community Enhancement (NiCE) summer project.

And one of their main tasks will be getting rid of sargassum, the rotting seaweed threatening tourism.

The 486 NiCE participants attended registration and orientation recently for this season’s two-week paid initiative, which is taking place from Monday, July 8 to Friday, July 19.

Participants were advised about two new elements introduced into the initiative, namely the clearance of sargassum from beaches and a booth at registration hosted by Workforce Opportunities and Residency (WORC) as a NiCE partner agency.

Cayman is currently experiencing unprecedented sargassum blooms and because they are affecting watersports enthusiasts' and beachgoers’ enjoyment of some stretches of coastline, thus posing both environmental and tourism challenges, the Government is tackling the seaweed head on.

In her welcome address, NiCE’s Project Manager, Lois Kellyman noted that the Department of Environment (DoE) was giving a presentation on sargassum during the orientation.

Attendees learned that such clearance would take place alongside the usual NiCE roster of tidying road verges, clearing beach accesses and general beautification of the island.

During his remarks, Minister for Commerce, Planning and Infrastructure, Hon. Joey Hew said the summer programme had been brought forward a month to help address the urgent need to remove the seaweed.

“We are pleased to be offering the programme earlier than we did last year and I want to thank the Department of Environmental Health and WORC staff and personnel in my ministry’s agencies, notably the National Roads Authority and Public Works Department for moving forward with its implementation and organisation,” he added.

“Sargassum is a naturally occurring phenomenon across the Caribbean, however the number of blooms we are currently experiencing is unprecedented and is affecting watersports enthusiasts' and beachgoers’ enjoyment of some stretches of coastline. As the DoE considers this is likely to be a long-term issue, posing both environmental and tourism challenges, Government has established a Sargassum Taskforce to tackle the issue.

“I am confident that NiCE can help with the clean-up effort. Sargassum removal from our coastal areas is a priority which requires a robust, multi-agency approach to keep our island’s beaches and sea beautiful for local residents, wildlife and Cayman’s tourism product."

Minister Hew said that he was certain that NiCE workers were up to the task and hoped that participants would do as they had previously by working efficiently and well.

DoE Sustainable Development Officer, Nathan Dack explained what was causing the large blooms of sargassum in Cayman waters, why they pose problems for marine life, and explained that raking and removal by hand was preferable to using heavy machinery on beaches, which would also remove sand and might cause coastal erosion during hurricane season.

As turtle hatchlings use sargassum as shelter, Mr Dack asked clean-up crews to avoid sweeping away turtle tracks as DoE use them to identify nesting sites.

Registrants learned how sargassum would be collected, what would be done with it following removal and if it was a health risk. Government workers were told that the seaweed would be gathered at sites throughout the island for possible use as fertiliser or burnt, and that it need not pose a health issue if proper safeguards were taken. Mr Dack advised that those with respiratory problems should refrain from working with the seaweed.

In closing, Mrs Kellyman advised newcomers and reminded returnee applicants that the project will offer the unemployed the opportunity to gain new skills and to show their ability to work diligently as part of a team.

“Your supervisors will be evaluating you and at the end of the two weeks you will be getting documentation that could be useful as a reference when job seeking,” she concluded.

Unemployment has dropped to its lowest rate in a decade

Cayman shows its love for turtles with innovative seminar