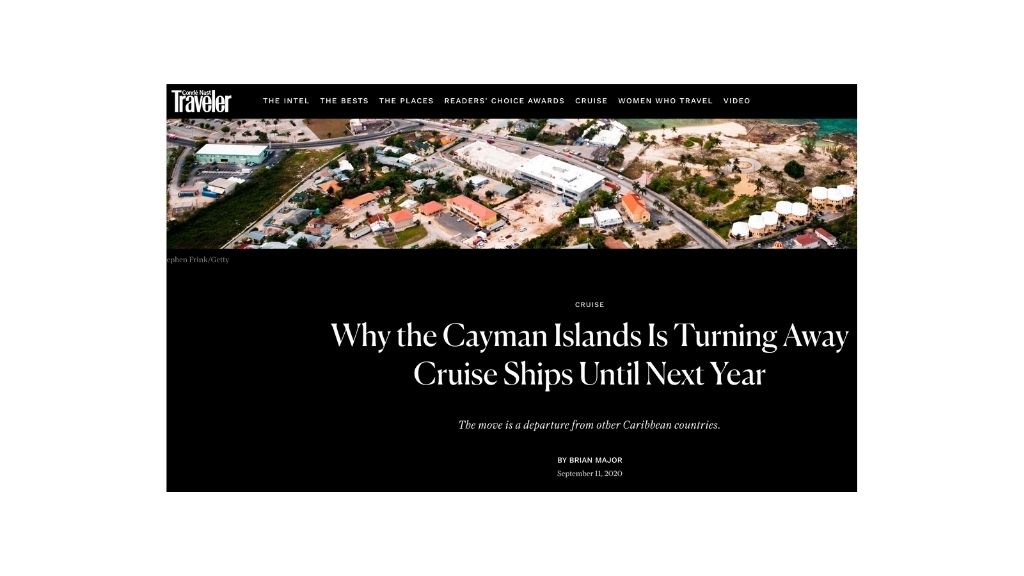 In a Conde Nast Traveler article dated September 11, the Cayman Islands, which happens to be the third-largest tourism destination by total passengers (1.8 million cruisers versus 502,739 land-based travelers in 2019), is identified as the sole Caribbean nation to voluntarily turn away cruise ships due to the COVID-19 pandemic.

As it currently stands, Cayman will not be allowing cruises into its borders until some point in 2021 — a decision that Conde Nast says is "at odds with the sentiments of its neighbours".

The Centers for Disease Control's no-sail advisory for US cruise lines that bans cruise operations through September, and the cruise lines' voluntary pause through October has caused a significant economic hit to other Caribbean nations such as Jamaica and The Bahamas, says Conde Nast.

Conde Nast recognizes the Cayman Islands government's strong policy of economic diversification which has provided the country with the luxury of being able to fall back on other industries such as financial services and construction, despite the critical economic fact that the cruise industry spent $224 million in direct expenditures in the Cayman Islands in 2018 and employed 4,622 people that year.

There are a number of benefits to this decision on the part of the Cayman Islands. For one, there is no doubt that there is a huge safety factor associated with it. Government has been adamant since day one that the health of Caymanians is more important than the economy.

Thirdly, given the decision not to go ahead with the $200 million cruise port project, the infrastructure to handle larger ships is lacking and it is a good idea to focus on other sources of tourism income.

The article by Brian Major concludes, "Cayman officials, meanwhile, make it clear they expect cruising to return — when everyone's ready."

By all accounts, this is a positive piece that depicts Cayman as a destination that does not rely on knee jerk reactions to economic circumstances, but rather, as with its financial strategy, is prudent and solid.

There is nothing more important than that.