Congratulations to CI Patrick Beersingh for 36 years on the RCIPS 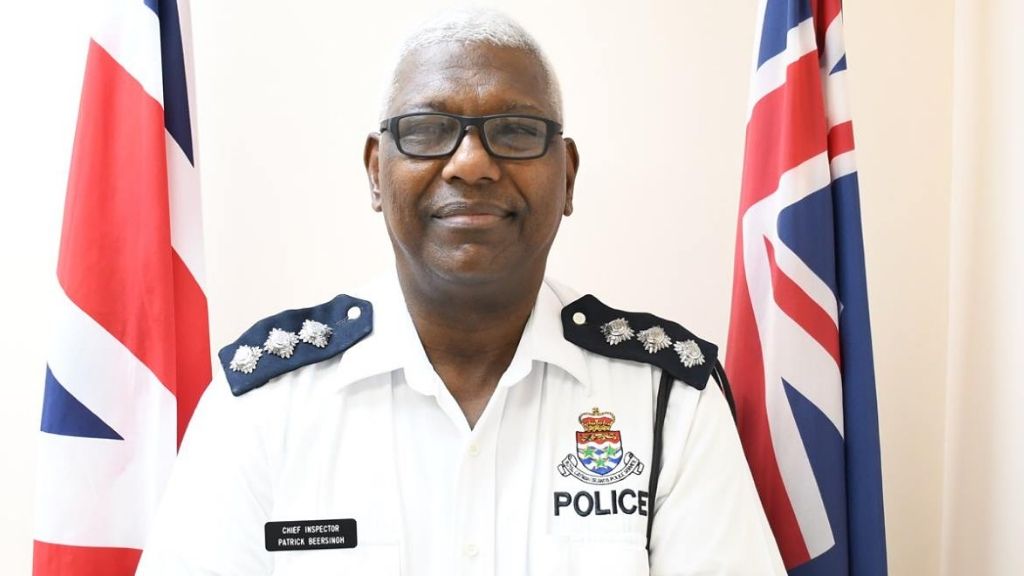 This year, Chief Inspector Patrick Beersingh is celebrating 36 years of being a police officer in the Cayman Islands.

Originally hailing from Jamaica, he migrated to the Cayman Islands in 1984 as an experienced officer from the Jamaica Constabulary Force, where he was a servicing officer for approximately 8 years.

After a brief initiation training, to acclimatize him to the laws and way of life of the Caymanian society, which in turn provided him with the skills he needed to successfully police in the Cayman Islands, CI Beersingh worked at the Bodden Town Police station for two years, after which he was transferred to work within the Criminal Investigations Department (CID) as a detective.

During the 8 years that CI Beersingh worked in the CID, he was promoted to Detective Sergeant where he was put in charge of his first team with the RCIPS.

In 1995, CI Beersingh was transferred to a unit formerly known as the Special Branch, where he spent approximately 10 years, during which time he was again promoted to the rank of Inspector and was named Detective Inspector. Due to his promotion, he was transferred from Special Branch and was put in charge of the Joint Intelligence Unit, where he spent only 1 year and was promoted once again to Acting Chief Inspector and placed in charge of the West Bay Police Station.

In 2007, CI Beersingh took charge of the Cayman Brac Police Station as the District Commander. He spent approximately 20 months in Cayman Brac, after which he returned to Grand Cayman and was promoted fully to the rank of Detective Chief Inspector of Police and put in charge of the Joint Intelligence Unit where he remained until the year 2011.

In 2011, CI Beersingh was transferred from the JIU to operate as the CI in charge of inspections and special projects. He held this position until the year 2013, where he transitioned to being second in command of the Proactive Operations. He held this post for 2 years, after which he was placed in charge of Contingency Planning. Following this task, he held the position of Chief of Staff and in June 2017 he transferred to police headquarters, where he began his new position, in charge of the Strategic Planning Unit, where he remains today.

When asked about his fondest moments in the service, CI Beersingh indicates that he has had a lot of fond memories over the years but a few stand out to him. “I liked doing protection details. I did protection for members of the Royal Family, the King of Sweden, and other heads of governments and VVIPs. I have even been in charge of protecting a witness who had her baby in my care.” said CI Beersingh.

One of CI Beersingh's most inspiring moments, while in the service, was in the aftermath of Hurricane Ivan where, as a frontline officer, there were countless occasions when he made a difference in the lives of so many civilians.

CI Beersingh indicates that his choice to become a police officer goes well beyond just a calling. “I come from a family with a healthy public service streak. We are known to be long-term-service-oriented people and I continued the tradition. My love for policing and service is more than on a personal level, it is on a country level.” says CI Beersingh, “I have been policing since I was 19-years-old. The good you do stays with you and empowers you, the failures stay too, but they become lessons.”

Even though CI Beersingh has acquired success in the service by moving up the ranks over the years, he has also made it a point to develop himself personally and professionally. He is currently on the last leg of completing his Doctorate in Business Administration.

“Chief Inspector Beersingh is a veteran police officer with over four decades of law enforcement experience and selfless service in his native country and his adopted homeland.” says  Deputy Commissioner of Police Anthony Ennis, “He’s highly devoted and committed to achieving organisational success and professional excellence. His commitment to lifelong learning is commendable, which he has applied to the continuous professionalization and modernization of policing throughout the RCIPS.”

The RCIPS is proud of CI Patrick Beersingh's achievements since he has been with the service. He continues to offer his hard work and knowledge through relentless service to the RCIPS and the Cayman Islands.