Congratulations to PC Hugh Bush for 36 years on the RCIPS 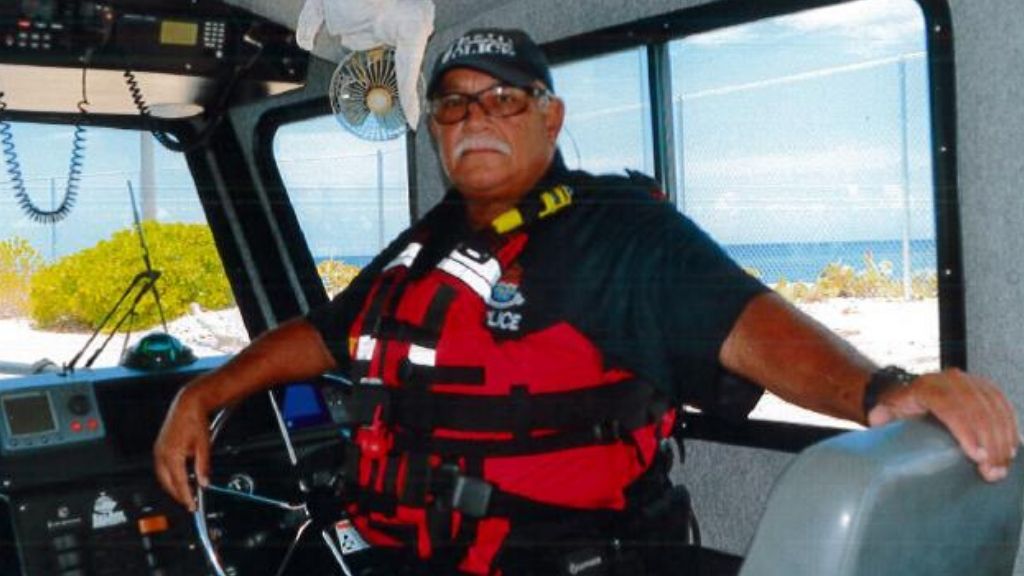 PC Hugh Bush, affectionately known to all as “King”, joined the Royal Cayman Islands Police Service in the year 1984 and is currently celebrating 36 years in service to the Cayman Islands.

PC Bush was previously employed with the Public Works Department within the Cayman Islands Government, working as a Labourer. He had gained vast experience and skill in the area of construction but ultimately he decided to make a change in direction with his career choice.

In 1984, when PC Bush started his own family, he decided that he would take up the offer of his friend who had been encouraging him to join the service. He applied to the RCIPS and passed all the required examinations to qualify as a recruit and be trained to become a police officer.

“I never aspired to be a police officer,” said PC Bush, “but after starting a family, I had a need to find employment that was more stable and had a consistent income. After becoming an officer, I grew to appreciate the role and love the job.”

PC Bush has some fond memories about his time in training. He specifically remembers having a good time in drill class with Drill Sergeant Franklin, now retired.

After a few months of training, PC Bush went on to work at the George Town Police Station as a shift officer. He was eventually transferred to the East End district to help address issues that the service was having at the time in interacting with the East End community. PC Bush took a no-nonsense approach to policing in the district and found that his methods were effective.  He carried out community projects and also put his foot down on domestic violence matters, earning the respect of the community.

PC Bush stated, “When you carry out your duty with integrity and without prejudice, people appreciate you, and seeing that appreciation is really rewarding.”

In 1987, PC Bush was drafted to work with the Drug Squad, where he worked on matters relating to local drug rings as well as drug interdictions by sea. His navigation skills and heritage were recognized and he was asked to join the Marine Unit in the year 1988. This was the start of the newly formed Joint Marine Unit and at the time he worked alongside a few other officers on the Cayman Defender.

In 1989, PC Bush attended the Canadian Coast Guard College in Nova Scotia, Canada, where he was trained and certified in Boating, Navigation Protocols and on being a boat captain. This training took 5-months; but when he returned to the Cayman Islands, the Cayman Defender was damaged and the Marine Unit was suspended. He then returned to the Drug Squad, where he remained until 1994.

In 1994, he was asked to assist with sailing home a newly built marine vessel, Cayman Protector, from Miami to Grand Cayman. While in Miami with his team, each person was asked to put forward a navigation plan to get the boat to Grand Cayman safely. His travel plan was different than the others, allowing for less time on the water and less fuel wasted.  A member of the International Maritime Organisation saw his plan and was impressed, and it was selected for the journey.

In 1995, PC Bush travelled to the United Kingdom, where he attended a course called The International Small Ship Command Course. He completed this course and returned to be instated as the Captain of the Cayman Protector.  He remained in the Joint Marine Unit for 5 years. During this time, he participated in a variety of marine activities and played an integral part in some of the largest drug operations in our open waters.

In the year 2000, he transferred to the Bodden Town Police Station on patrol for a few years, giving himself some time to work in the community in which he lived and to spend more time with his family. In 2005 however, following hurricane Ivan, he returned to the Joint Marine Unit, where he remains today.

PC Bush was asked what his favourite part of being a police officer has been over the years.

“Search and rescue jobs are the most rewarding jobs for me," he said. "You finish knowing that you literally saved someone’s life that day. I once assisted with a family whose boat was sinking in an area off the waterfront, and there were sharks circling the boat. The family had given up hope for help and were so grateful. It's jobs like these that give me purpose.”

PC Bush says that he is glad that he became a police officer. For the most part, he has enjoyed his time with the service. He received prestigious training throughout the years and a host of experience, skill and instincts. His only regret is that he did not see the importance of upward mobility earlier in his career.

The Joint Marine Unit is currently phasing into the newly formed Cayman Islands Coast Guard and is being headed by Commander Robert Scotland. When asked about PC Bush, Commander Scotland said, “For over 36 years, PC Bush has constantly demonstrated his commitment to ensuring the safety and security of our Islands. His service to the country, especially in ensuring that its maritime safety and security is preserved is something to which all aspiring members of the Cayman Islands Coast Guard should strive to mirror.”

“PC Hugh Bush dedicated his career with the police to the reduction of drugs in the Cayman society,” said Deputy Commissioner of Police Kurt Walton. “On behalf of the RCIPS Senior Command Team, I would like to thank PC Bush for the dedication, hard work, service and skill that he has displayed while carrying out his duty. Even today, he continues to work hard and provide mentorship to the younger members of the team. I know he will continue to work hard and inspire others.”