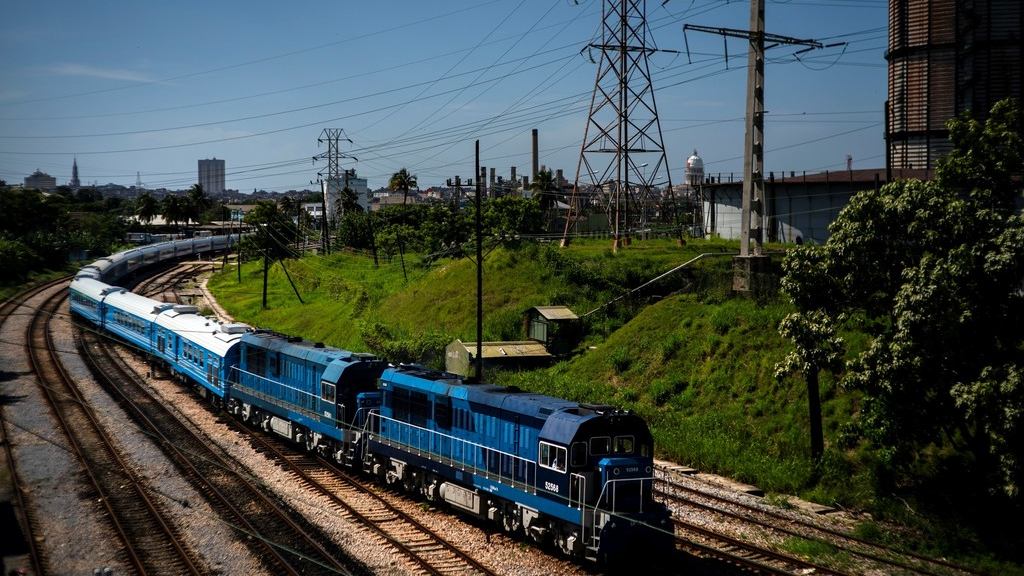 The first train using new equipment from China pulled out of Havana Saturday, hauling excited passengers on the start of a 915-kilometer (516-mile) journey to the eastern end of the island as the government tries to overhaul the country's aging and decrepit rail system.

The 14 gleaming Chinese cars and a locomotive departed the city's central train station and will wend their way through nine cities before ending in Guantanamo 15 hours later. It has four air-conditioned wagons and a rolling restaurant car. Previously the trip could take days because of equipment breakdowns and track erosion.

It marks the first step of an overhaul Cuba's communist government started early last year, repairing some 2,600 miles (4,200 kilometers) of ageing tracks and dozens of tumble-down stations scattered around the island.

"It's a blessing from God because we had to take this trip and private cars are very expensive, but we got a very good low fare and we are proud to be taking this train," said 69-year-old passenger Virginia Pardo.

But much remains to be done to bring Cuba's ailing train system up to acceptable standards with miles of rusting tracks and just a handful of reliably equipped trains.

Cuba received a shipment of 80 new train carriages and locomotives in early May, part of a promised consignment of 250 pieces of new equipment by the end of 2019.

"We have more work to do because there needs to be better organisation to travel on the train, so people don't get so overworked and desperate to travel on it," said 57-year-old passenger Angel Matamoros.

According to the Cuban Transportation Ministry, trains carried 6.7 million passengers in 2018, a sharp drop from almost 11 million passengers in 2004. The government hopes to increase ridership by one million in 2019 on long-distance routes. Train service to the far-eastern cities of Santiago, Holguin, Camaguey and Guantanamo are heavily used by locals.

The Havana-Guantanamo trip costs from 200 Cuban pesos (US$8) roundtrip, to as little as 20 Cuban pesos (80 US cents) between Havana-Matanzas, the first stop on the island-wide circuit.

The low costs are still challenging for many Cubans who only earn on average $40 a month, but are far cheaper than bus, plane or car travel.

Cuba is the only country in the Caribbean that offers island-wide rail service and once boasted the first country-wide rail line in Latin America, which started service in 1837 with a 17-mile (27-kilometer) long line built to transport sugarcane.

US sanctions Cuban firm to weaken Maduro's hold in Venezuela