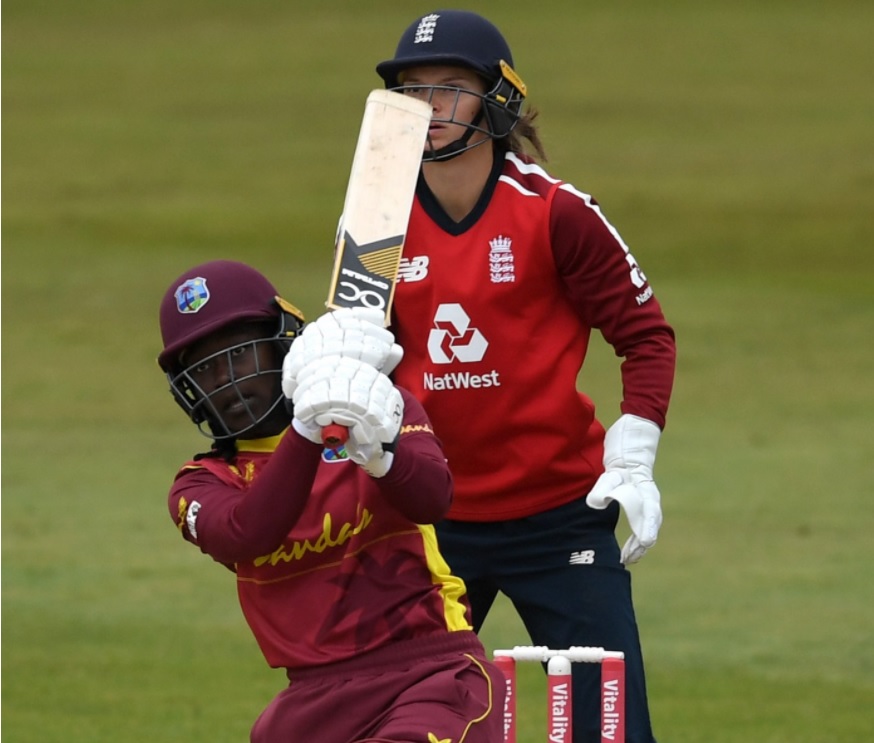 Deandra Dottin on the go during her knock of 63.

Deandra Dottin scored 63 runs but it wasn't enough as England women cruised to a 20-run victory over West Indies women  to take an unassailable 3-0 lead in the five-match Twenty20 series, at the Incora County Ground, in Derby on Saturday.

Chasing a victory target of 155, West Indies women were restricted to 134 for five despite rearranging their batting line-up. However, they made a better attempt at their chase than in the previous two games.

Number three Dottin, who was  promoted to open alongside Lee-Ann Kirby, once again led the way, but the Caribbean side was unable to find the boundary as the overs ticked down.

The Kirby gamble did not pay off as the 33-year-old was stumped by Amy Jones for three and wicketkeeper Shemaine Campbelle, also moved up the order, was dismissed for five.

Captain Stafanie Taylor came in with her side on 91 for four, needing 64 from 34 deliveries. When Dottin fell hoisting Katherine Brunt to deep square-leg, West Indies' chase faltered. Taylor was undefeated on 14 at the end and her Jamaican teammate Chinelle Henry, 12.

Hayley Matthews was the second-best scorer for the West Indies with 21 from 23 balls.

England's leg-spinner Sarah Glenn picked up two for 18 from her allotted four overs.

Earlier, England women - electing to bat - made 154 for six on a sluggish pitch, with Shamilia Connell taking two for 13 from three overs.

Nat Sciver was the standout performer for England with 82 from 61 balls, rescuing the hosts after they slipped to 83 for four.

Sciver was well supported by captain Heather Knight. The pair put on a 59-run stand, which steadied England but, just as the two looked to accelerate, Knight was caught behind for 29 and Amy Jones was bowled by Hayley Matthews for four.

Sciver opted for quick singles and her half-century came off 40 ball.

In the final five overs, Sciver took 17 runs off the penultimate over, including England's sole six of the innings off Taylor. Fran Wilson supported well with an unbeaten 16 from 15 balls that pushed England towards what proved to be a winning total.

Windies struggles continue as England close in on series victory

Pope, Buttler steer England to 258-4 in decider vs Windies