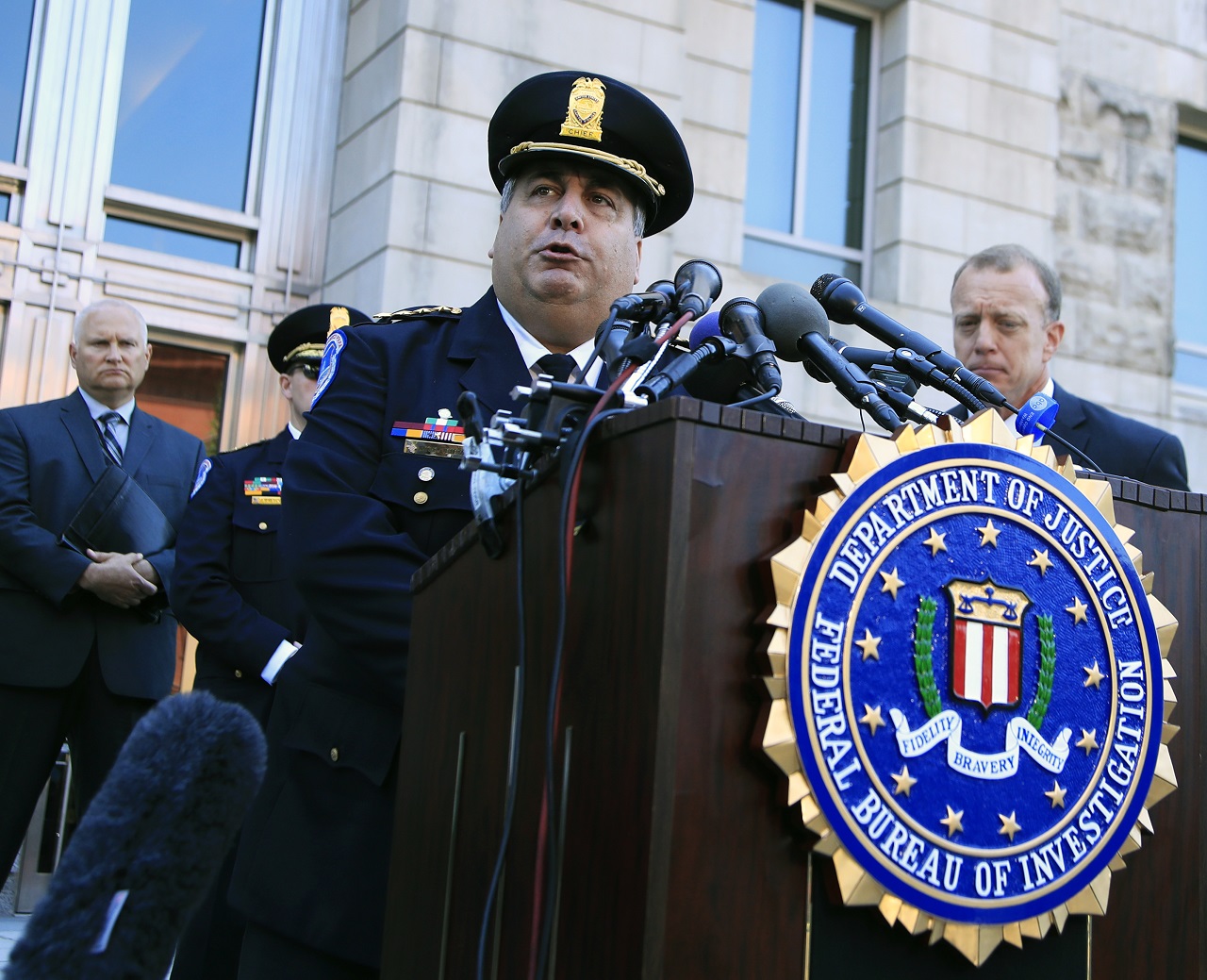 United States Capitol Police Chief Matthew Verderosa, with Federal Bureau of Investigation Washington Field Office, Special Agent in Charge Timothy Slater, back right, speaks to reporters outside the FBI Washington Field Office, Wednesday, June 21, 2017 in Washington, during a news conference about the investigative findings to date in the shooting that occurred at Eugene Simpson Stadium Park in Alexandria, Va. on Wednesday, June 14, 2017.

A gunman acted alone when he shot and wounded a top House Republican and four other people on a northern Virginia baseball field, the FBI said Wednesday.

Tim Slater, who leads the criminal division of the FBI's Washington field office, also said during a news conference that James T. Hodgkinson did not have any ties to terrorism.

Rep. Steve Scalise, 51, the House majority whip, was gravely wounded in the shooting June 14.. He has undergone several surgeries and remains hospitalized. His condition has been upgraded to serious.

Scalise and other congressional Republicans were practicing for their annual charity baseball game against Democrats when the gunman started shooting. U.S. Capitol Police and other officers returned fire and killed Hogdkinson, an unemployed home inspector with a deep animus toward President Donald Trump and other Republicans.

Hodgkinson, 66, was from Belleville, Illinois, and had volunteered for Bernie Sanders' presidential campaign. For months before the shooting, he had been living out of his van in the Washington area, with more than 200 rounds of ammunition among the belongings he kept in a storage unit, Slater said.

Hodgkinson had a list of six members of Congress on him, Slater said, but there was no indication that he intended to target them. He declined to say whether the people on the list were Republicans or at the baseball practice. Hodgkinson had been in email contact with the two Democratic senators from Illinois, he said.

Both the rifle and handgun Hodgkinson was carrying were purchased legally through federal firearms licenses, the FBI said. The rifle was modified to accept a detachable magazine and the original stock was replaced with a folding stock. Hodgkinson bought the guns in April, after Trump was elected, Slater said.

House Speaker Paul Ryan said Wednesday that Scalise "is on the road to recovery" but it will take some time. The bullet entered the congressman's hip and shattered blood vessels, bones and internal organs, leaving him at imminent risk of death, doctors have said.

US Congressman, others shot in mass shooting

Gunman who shot congressman had history of anti-GOP activity