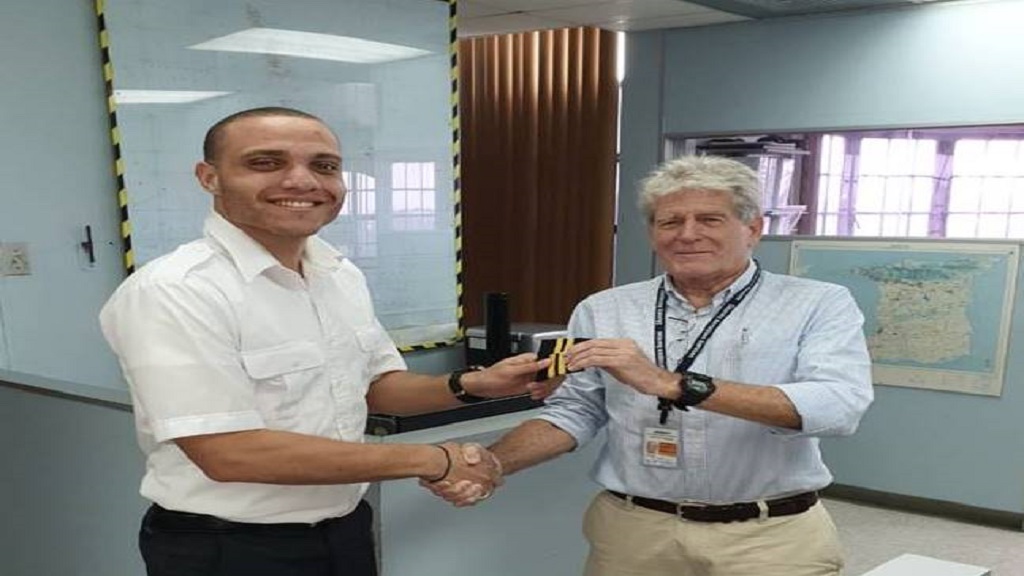 Captain Nicholas Nothnagel, of the National Helicopters in Trinidad, presenting Darren with his First Officer bars.

One of Cayman's finest trainee RCIPS pilots is one step closer to Flight Captain status.

Auxiliary Constable Darren McLean recently received his First Officer Bars as part of his training and development as a helicopter pilot with National Helicopters in Trinidad. This is a significant milestone for Darren who is now qualified to start flying as a co-pilot servicing contracts to the very demanding oil and gas industry.

And after spending Christmas at home in Cayman, he is now looking forward to completing his training and qualifications before returning to the Cayman Islands where he will transition to Flight Captain with the RCIPS Air Operations Unit.

Darren is expected to return to the RCIPS before the end of 2022.

“Darren has always shown such ambition and potential,” said Superintendent Brad Ebanks in charge of Special Operations. “I had no doubt that he would make us proud here in the RCIPS and the Cayman Islands as a whole, given his aptitude and passion for flying.

"Darren has a great support team within the Air Operations Unit, and they follow his progress as well as ensuring that he does well while away from home. I look forward to hearing more of his successes as he continues flight training in Trinidad with the NHSL.”

Police Commissioner Derek Byrne added: “I am very proud of the work that Darren has done so far in Trinidad with National Helicopters, and commend him for achieving his first officer status, which is a significant milestone in his professional development and training. He is a very fine ambassador for the RCIPS and the Cayman Islands."