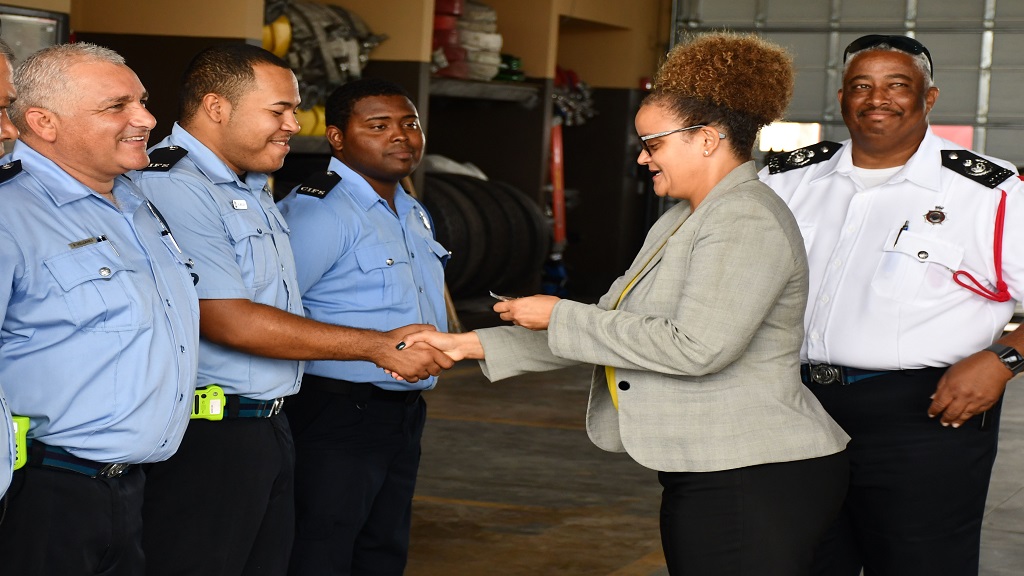 Brave fire officers from the Cayman Islands Fire Service (CIFS) were honoured for their achievements this week during a visit by the Minister for Home Affairs, Hon. Tara Rivers, JP.

All fire officers from the West Bay and Central stations were presented with challenge coins, the first of their kind to be unveiled in the Cayman Islands. The coins are in recognition of the brother and sisterhood of the service.

The CIFS’ coin was designed by Pump Engineer, Brian Watler and includes the Cayman Islands Coat of Arms as a symbol of the territory.

Challenge coins have a long history within the global first responder and defence communities. The popularity of the coins grew after World War I as stories of bravery began to spread.

The story goes that a United States lieutenant captured by a German patrol managed to escape to a French outpost. Without any personal identification other than his squadron medallion, he was initially thought to be an enemy saboteur.

On showing his French captors the medallion, one soldier recognised the squadron insignia, proving he was part of the allied forces and ultimately saving his life.

The tradition to carry your medallion then spread throughout the armed forces and first responders around the world as a way to prove your membership when challenged and boost morale.

Challenge coins have become highly collectable, as each design is unique to a particular group. Fire officers will often swap coins with each other at international training events.

“I’m very glad to be here to honour the tremendous work our fire officers do each and every day to protect our communities. The camaraderie and passion for the role I’ve seen today is inspiring,” Minister Rivers said.

“The Cayman Islands Fire Service has seen much improvement, and the continued investment that the Government is making in personnel and capital is yet another indication of the immense value and gratitude we place in our crews."

During the visit, the Minister also took the time to see first-hand the newest developments taking place at the Fire Service as it continues on its journey to world class standards.

At the West Bay station, Fire Officers Henry Ebanks, Luke Welds, Kody Welds, Nicholas Peralta, Joseph Smith and David Terry gave a full demonstration of brand new extrication equipment used in road traffic collisions. They used the equipment to perform a full disassembly of a vehicle as they would at a roadside accident scene.

Divisional Manager for Domestic, Randy Rankin oversaw the demonstration and provided the Minister with an explanation of both the tactical approach being used as well as the enhanced functionality of the equipment.

During the visit to the Central station, Acting Training and Safety Manager, John Christian showcased the benefits of new self-contained breathing apparatus recently acquired by CIFS to the Minister, including the improvements compared to previous equipment.

“Our new extrication and breathing apparatus equipment is state-of-the-art and ensures the safety of our officers and the public they serve is at the forefront of the fire and rescue work we do,” Mr Christian explained.

Minister Rivers also met with the CIFS’ next generation of Caymanian fire officers who joined the service in September and are expected to complete their training course in the next eight weeks.

She was treated to an impressive drill display under the leadership of Lead Fire Officer Carson McField.

Renovations to both stations were also viewed during the Minister’s visit. Anticipated to be completed shortly, the upgrades will improve the aesthetic and functionality of the facilities, and enhance workplace health and safety for fire officers.

“The last 12 months have seen significant developments across the board at the Fire Service. The presentation of challenge coins to our crews solidifies our collective commitment to continuing this journey together as one team,” said Deputy Chief Fire Officer for Domestic, Roy Charlton.

Minister Rivers was also presented with a challenge coin by the Chief Fire Officer Paul Walker, QFSM during the visit.