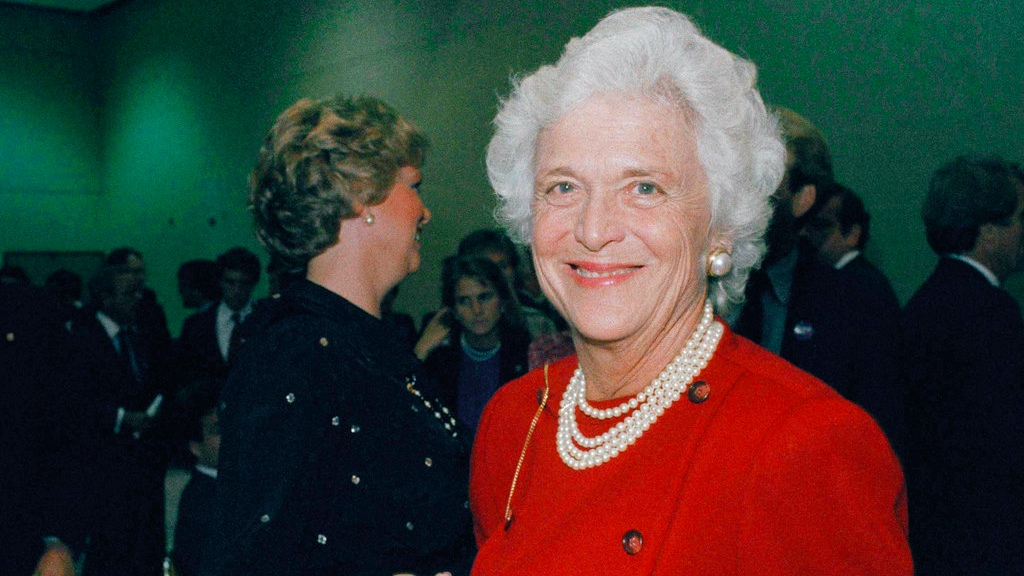 Barbara Bush, the snowy-haired first lady whose plainspoken manner and utter lack of pretense made her more popular at times than her husband, President George H.W. Bush, died Tuesday, a family spokesman said. She was 92.

Mrs. Bush brought a grandmotherly style to buttoned-down Washington, often appearing in her trademark fake pearl chokers and displaying no vanity about her white hair and wrinkles.

"What you see with me is what you get. I'm not running for president — George Bush is," she said at the 1988 Republican National Convention, where her husband, then vice president, was nominated to succeed Ronald Reagan.

The Bushes, who were married Jan. 6, 1945, had the longest marriage of any presidential couple in American history. And Mrs. Bush was one of only two first ladies who had a child who was elected president. The other was Abigail Adams, wife of John Adams and mother of John Quincy Adams.

"I had the best job in America," she wrote in a 1994 memoir describing her time in the White House. "Every single day was interesting, rewarding, and sometimes just plain fun."

On Sunday, family spokesman Jim McGrath said the former first lady had decided to decline further medical treatment for health problems and focus instead on "comfort care" at home in Houston. She had been in the hospital recently for congestive heart failure and chronic obstructive pulmonary disease. In 2009, she had heart valve replacement surgery and had a long history of treatment for Graves' disease, a thyroid condition.

The publisher's daughter and oilman's wife could be caustic in private, but her public image was that of a self-sacrificing, supportive spouse who referred to her husband as her "hero."

In the White House, "you need a friend, someone who loves you, who's going to say, 'You are great,'" Mrs. Bush said in a 1992 television interview.

Her uncoiffed, matronly appearance often provoked jokes that she looked more like the boyish president's mother than his wife. Late-night comedians quipped that her bright white hair and pale features also imparted a resemblance to George Washington.

Eight years after leaving the nation's capital, Mrs. Bush stood with her husband as their son George W. was sworn in as president. They returned four years later when he won a second term. Unlike Mrs. Bush, Abigail Adams did not live to see her son's inauguration. She died in 1818, six years before John Quincy Adams was elected.

Mrs. Bush insisted she did not try to influence her husband's politics.

In 1984, her quick wit got her into trouble when she was quoted as referring to Geraldine Ferraro, the Democratic vice presidential nominee, as "that $4 million — I can't say it, but it rhymes with rich."

"It was dumb of me. I shouldn't have said it," Mrs. Bush acknowledged in 1988. "It was not attractive, and I've been very shamed. I apologized to Mrs. Ferraro, and I would apologize again."

"She's never shied away from saying what she thinks. ... She's managed to insult nearly all of my friends with one or another perfectly timed acerbic comment," Laura Bush wrote in her 2010 book, "Spoken from the Heart."

In her 1994 autobiography, "Barbara Bush: A Memoir," Mrs. Bush said she did her best to keep her opinions from the public while her husband was in office. But she revealed that she disagreed with him on two issues: She supported legal abortion and opposed the sale of assault weapons.

"I honestly felt, and still feel, the elected person's opinion is the one the public has the right to know," Mrs. Bush wrote.

She also disclosed a bout with depression in the mid-1970s, saying she sometimes feared she would deliberately crash her car. She blamed hormonal changes and stress.

"Night after night, George held me weeping in his arms while I tried to explain my feelings," she wrote. "I almost wonder why he didn't leave me."

She said she snapped out of it in a few months.

In a speech in 1985, she recalled the stress of raising a family while married to a man whose ambitions carried him from the Texas oil fields to Congress and into influential political positions that included ambassador to the United Nations, GOP chairman and CIA director.

"This was a period, for me, of long days and short years," she said, "of diapers, runny noses, earaches, more Little League games than you could believe possible, tonsils and those unscheduled races to the hospital emergency room, Sunday school and church, of hours of urging homework or short chubby arms around your neck and sticky kisses."

Along the way, she said, there were also "bumpy moments — not many, but a few — of feeling that I'd never, ever be able to have fun again and coping with the feeling that George Bush, in his excitement of starting a small company and traveling around the world, was having a lot of fun."

In 2003, she wrote a follow-up memoir, "Reflections: Life After the White House."

"I made no apologies for the fact that I still live a life of ease," she wrote. "There is a difference between ease and leisure. I live the former and not the latter."

Along with her memoirs, she wrote "C. Fred's Story" and "Millie's Book," based on the lives of her dogs. Proceeds from the books benefited adult and family literacy programs. Laura Bush, a former teacher with a master's degree in library science, continued her mother-in-law's literacy campaign in the White House.

The 43rd president was not the only Bush son to seek office in the 1990s. In 1994, when George W. was elected governor of Texas, son Jeb narrowly lost to incumbent Lawton Chiles in Florida. Four years later, Jeb was victorious in his second try in Florida.

"This is a testament to what wonderful parents they are," George W. Bush said as Jeb Bush was sworn into office. He won a second term in 2002, and then made an unsuccessful bid for the Republican presidential nomination in 2016.

Sons Marvin and Neil both became businessmen. Neil achieved some notoriety in the 1980s as a director of a savings and loan that crashed. Daughter Dorothy, or Doro, has preferred to stay out of the spotlight. She married lobbyist Robert Koch, a Democrat, in 1992.

In a collection of letters published in 1999, George H.W. Bush included a note he gave to his wife in early 1994.

"You have given me joy that few men know," he wrote. "You have made our boys into men by bawling them out and then, right away, by loving them. You have helped Doro to be the sweetest, greatest daughter in the whole wide world. I have climbed perhaps the highest mountain in the world, but even that cannot hold a candle to being Barbara's husband."

Mrs. Bush was born Barbara Pierce in Rye, New York. Her father was the publisher of McCall's and Redbook magazines. After attending Smith College for two years, she married young naval aviator George Herbert Walker Bush. She was 19.

After World War II, the Bushes moved to the Texas oil patch to seek their fortune and raise a family. It was there that Bush began his political career, representing Houston for two terms in Congress in the late 1960s and early 1970s.

In all, the Bushes made more than two dozen moves that circled half the globe before landing at the White House in 1989. Opinion polls taken over the next four years often showed her approval ratings higher than her husband's.

The couple's final move, after Bush lost the 1992 election to Bill Clinton, was to Houston, where they built what she termed their "dream house" in an affluent neighborhood. The Bush family also had an oceanfront summer home in Kennebunkport, Maine.

After retiring to Houston, the Bushes helped raise funds for charities and appeared frequently at events such as Houston Astros baseball games. Public schools in the Houston area are named for both of them.

In 1990, Barbara Bush gave the commencement address at all-women Wellesley College. Some had protested her selection because she was prominent only through the achievements of her husband. Her speech that day was rated by a survey of scholars in 1999 as one of the top 100 speeches of the century.

"Cherish your human connections," Mrs. Bush told graduates. "At the end of your life, you will never regret not having passed one more test, winning one more verdict or not closing one more deal. You will regret time not spent with a husband, a child, a friend or a parent."