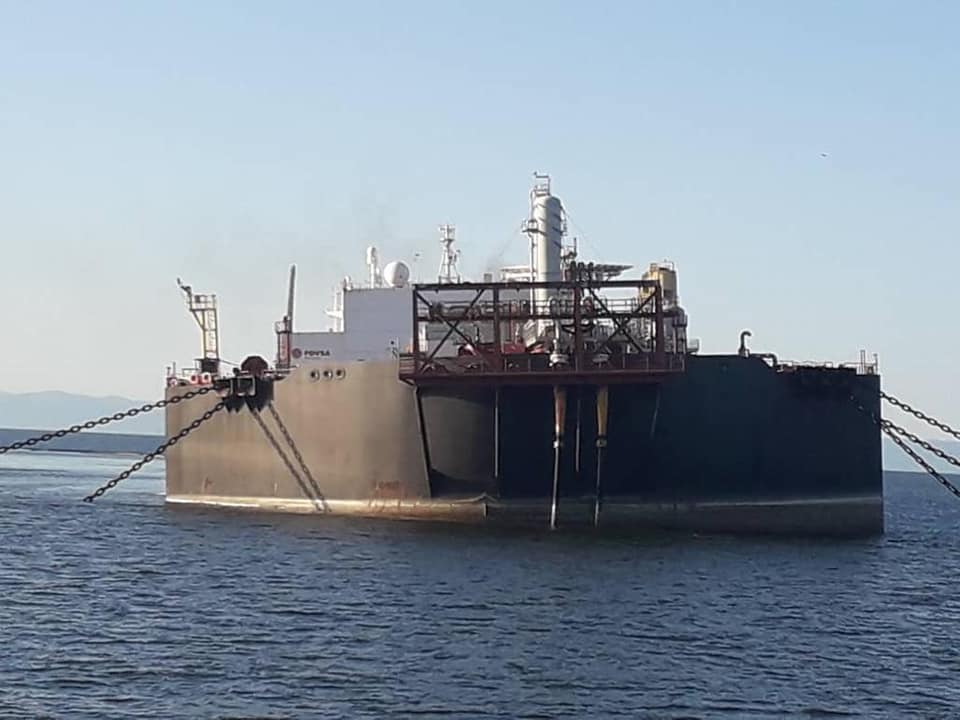 Footage shared by conservation group Fishermen and Friends of the Sea on October 16. The group said a list was seen on the vessel. A team of experts inspected the vessel on October 20 and no tilt or water ingress was seen. (Photo: FFOS)

A stranded oil tanker that many were concerned was on the verge of spilling 1.3 million barrels of crude oil into the Caribbean no longer poses a major environmental risk, said Trinidad and Tobago’s government on Wednesday.

Trinidad & Tobago's Energy Minister Franklin Khan said observations made by a team of experts who visited the FSO Nabarima showed no visible tilt or water ingress within the vessel.

Speaking at a media briefing today, Foreign Affairs and CARICOM Minister, Dr Amery Browne, said, however, that the team was not allowed to take photos or videos of the event.

They said the Venezuelan representatives who accompanied the Trinidadian experts who inspected the vessel took photos, which they will request.

Khan said the team — which consisted of senior petroleum engineer Craig Boodoo, Trinidad and Tobago Coast Guard officer Lt Warner and port state inspector of the Maritime Services Division, Michael Daniel— was taken on a fly-around of the vessel but that they observed no visible tilt.

The team also inspected other areas of the vessel, including the control room, boiler room, pumps and bilge tanks and noticed no water ingress. The tour lasted about three hours.

‘Their report indicated that everything seemed to have been fine. There was no evidence of water ingress of water presence. Two generators were operational, one was on standby…all systems appeared to be functional. The double hull is intact.'

Khan said the representatives were open about the incidents which took place in September which have since been rectified.

He said they also showed their oil spill response plan which was deemed satisfactory.

He said Trinidad and Tobago and Venezuela both share an oil spill contingency plan which could be invoked by either party if there was imminent danger.

'We were almost bullied into invoking this plan, which is why this visit was so important,' Khan said.

The minister noted that another vessel, the Icaro, was due to offload the crude, which would most likely be transferred to Venezuela, and noted that the vessel's capacity is smaller. As a result, the offloading of the Nabarima’s 1.3 million barrels of oil would take between 30-35 days.

They have therefore suggested using a larger tanker to offload the crude, ideally so that the operation would take place within two-to-five days.

Khan noted, however, that the existing process is safe: ‘The transfer process that is currently taking place, albeit slow, is considered very safe.’

Regarding footage shared by conservation group Fishermen and Friends of the Sea, which was taken on October 16, he said he could not comment on that.

‘Our team visited on Tuesday and they have seen the vessel totally upright, no list. The double-wall is intact. I have no comment to make on who posted what.’

Dr Browne noted the international and regional concern and said there is an element of gratitude from CARICOM members that Trinidad and Tobago has been able to provide clarity on the situation.

He also referred to social media calls to seize the vessel and transfer the oil without the requisite permissions as absurd:

'There's been a lot of social media activity, which is a good sign...one that caught my attention was a repeated remark that we just go and seize the vessel. Obviously, that would be a violation of international law. Another was that we should empty the vessel ourselves...that was an absurd proposition.'

He said there has been much diplomatic activity behind the scenes, with constant communication between both nations.

Dr Browne said they have already requested a follow-up visit to monitor the transfer as operations continue.

What is the FSO Nabarima?

The Nabarima is a floating stored oil (FSO) vessel which stores oil from the Corocoro Oil field in the Venezuelan Gulf.

The vessel which has a capacity of 1.4 million barrels of oil, is jointly owned by Venezuela’s PdVSA and Italian company Eni Group and was fixed at that location for approximately 10 years.

The vessel has been dormant after US sanctions were placed on PDVSA preventing international trade.

In a statement earlier this month, the US Embassy has said no sanctions would occur from any operation resulting from an environmental or humanitarian crisis.