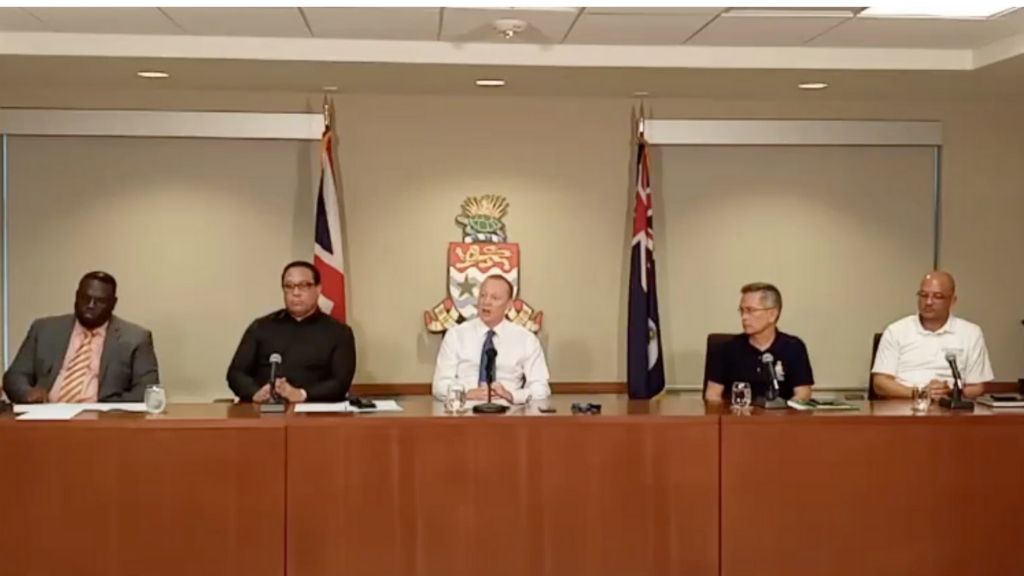 Government has placed a ban on public gatherings of over 100-people.

This is according to the Premier, the Honourable Alden McLaughlin at a press conference that was scheduled to take place at 3.30PM today, March 13, 2020 which was also attended by the Health Minister Dwyane Seymour, Chief Medical Officer, Dr John Lee, Health Service Authority’s Medical Officer of Health Dr Samuel Williams-Rodriguez, and Governor Martyn Roper.

Cabinet has made some other key decisions. These were communicated as follows:

A number of countries have been added to the previously instituted travel ban including China, all countries in the Schengen area, Iran, Japan and South Korea.

Schools will be closed from Monday March 16 to April 27.

No cruise ships will be allowed to enter the port for 60 days.

The ban means government events such as inter-school sports days, Cayman Brac Agriculture Show, carnival and the Deputy Governor’s 5K will be postponed or cancelled.

Other community gatherings such as sporting events, church services, cinemas, bars and restaurants with more than 50 people will also no longer be allowed as part of the ban to protect the public.

Worksites are not considered public gatherings. Therefore, offices, construction sites and other workplaces are not included in the ban. Employers are strongly encouraged to implement flexible working arrangements. “Workplaces may have to stagger work shifts. Employers will have to make decisions on what is in the best interest of staff,” said the Premier.

People will be allowed to go to the beach but are advised to not get too close.

Cargo and goods are presently still coming in. The Health Minister advised that further arrangements may have to be made to protect ports.

Hospitals, supermarkets and pharmacies are exempted from the ban and will be open.

The Health Minister has asked, “persons to cancel their travel plans” but the Premier stressed that air travel would be allowed domestically among the Cayman Islands.

Other topics that were raised include the following:

A delegation of three people from Public Health England will be coming to Cayman to provide support.

Starting next week we will be able to test on island for coronavirus.

With regards to the Cayman Airways flight on which there was a sick passenger today, the passenger in question has been placed in isolation. The symptoms are not consistent with coronavirus.

Some insurance companies are raising their allowances for medication.

The Health Minister explained that false rumours have caused officials to “out fires” when they should be working on the affairs of the country. “The spreading of rumours is totally unacceptable,” said his Excellency, the Governor.

“We will have a lot more challenges but we will come out at the other end,” said the Premier. “The size of Cayman is a huge advantage.”

Chief Medical Officer Dr John Lee urges members of the public who have flu-like symptoms and feel there is a risk that they may have the disease, to contact the HSA at flu@hsa.ky or via the flu hotline 1-800-534-8600.

First case of COVID-19 confirmed in the Cayman Islands