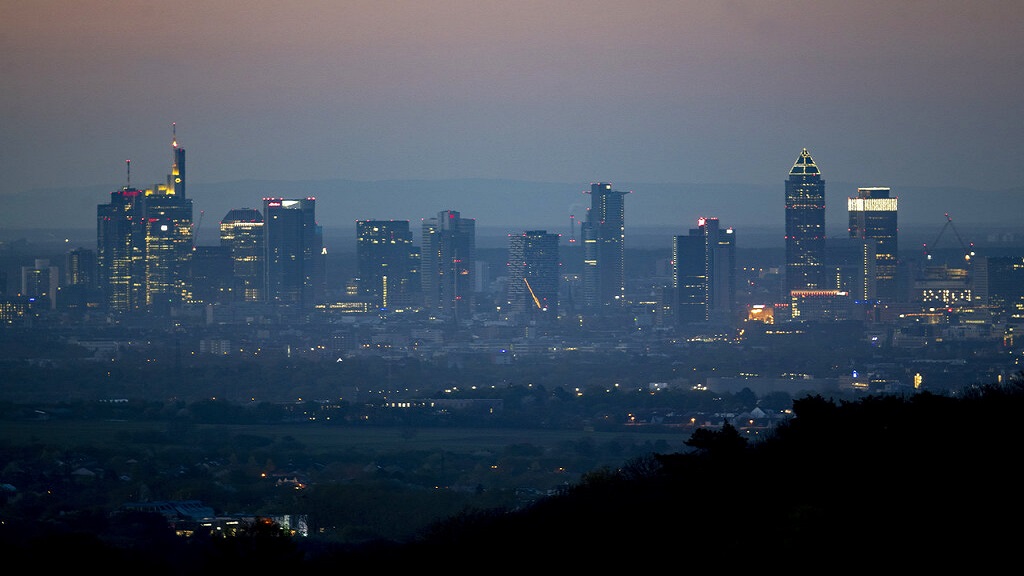 The buildings of the banking district are seen in Frankfurt, Germany, early Tuesday, April 14, 2020. Due to the coronavirus the economy expects worldwide heavy losses. (AP Photo/Michael Probst)

Beaten down by the coronavirus outbreak, the world economy in 2020 will suffer its worst year since the Great Depression of the 1930s, the International Monetary Fund (IMF) says in its latest forecast.

The IMF said Tuesday that it expects the global economy to shrink three per cent this year — far worse than its 0.1 per cent dip in the Great Recession year of 2009 — before rebounding in 2021 with 5.8 per cent growth. It acknowledges, though, that prospects for a rebound next year are clouded by uncertainty.

The bleak assessment represents a breath-taking downgrade by the IMF. In its previous forecast in January, before coronavirus (COVID-19) emerged as a grave threat to public health and economic growth worldwide, the international lending organisation had forecast moderate global growth of 3.3 per cent this year.

But far-reaching measures to contain the pandemic — lockdowns, business shutdowns, social distancing and travel restrictions — have suddenly brought economic activity to a near-standstill across much of the world.

“The world has been put in a great lockdown,’’ the IMF's chief economist, Gita Gopinath, told reporters. “This is a crisis like no other.”

Gopinath said the cumulative loss to the global gross domestic product, the broadest gauge of economic output, could amount to $9 trillion — more than the economies of Germany and Japan combined.

The IMF’s twice-yearly World Economic Outlook was prepared for this week’s spring meetings of the 189-nation IMF and its sister lending organization, the World Bank. Those meetings, along with a gathering of finance ministers and central bankers of the world’s 20 biggest economies, will be held virtually for the first time in light of the coronavirus outbreak.

Worldwide trade will plummet 11 per cent this year, the IMF predicts, and then grow 8.4 per cent in 2021.

Last week, the IMF's managing director, Kristalina Georgieva, warned that the world was facing “the worst economic fallout since the Great Depression.’’ She said that emerging markets and low-income nations across Africa, Latin America and much of Asia were at especially high risk. And on Monday, the IMF approved $500 million to cancel six months of debt payments for 25 impoverished countries.

The IMF cautioned that its forecast is shrouded by unknowns. They include the path that the virus will take; the effectiveness of policies meant to contain the outbreak and minimize the economic damage; and uncertainty over whether, even many months from now, people will continue to isolate themselves and depress spending as a precaution against a potential resurgence of the virus.

On a hopeful note, the IMF noted that policymakers in many countries have engineered what it calls a “swift and sizable’’ response to the economic crisis.

In the United States, for instance, the Federal Reserve has intervened aggressively to smooth lending markets. And Congress has enacted three separate rescue measures, including a $2.2 trillion aid package — the largest in history — that is meant to sustain households and businesses until the outbreak recedes and economic life begins to return to normal.

That package includes direct payments to individuals, business loans, grants to companies that agree not to lay off workers and expanded unemployment benefits. And Congress is moving toward approving a possible fourth economic aid measure.

In Europe, the sudden downturn has spotlighted the vulnerabilities of the shared euro currency, whose members are still healing from a debt crisis in 2012-2015. The 19-country bloc lacks a powerful central treasury. And it's struggled to settle on a unified fiscal response, with northern European countries like the Netherlands and Germany blocking proposals for shared borrowing backed by all countries.

The member countries did agree on what could amount to a half-trillion euros in stimulus. But conditions on part of the package mean that some of the money may never be tapped.

Italy, which has been deeply hurt by the crisis, is expected to suffer a nine per cent drop this year in its gross domestic product, and its debt load could soar from an already high 135 per cent of GDP. Fears have arisen of a renewed debt crisis, though for now, stimulus from the European Central Bank has calmed lending markets.

European governments are deploying plans that subsidize worker pay at companies that have had to put employees on shorter hours or send them home. The idea is that companies keep workers on board so that they can quickly resume without having to recruit and train new staffers later. Their workers' spending also helps support other businesses. The system represents a sharp contrast to practices in the United States, where applications for unemployment benefits have skyrocketed.

In Germany, 2.35 million workers are expected to take part in the program. They will receive at least 60 per cent of net pay.

Some countries can't afford sufficiently aggressive rescue plans, the IMF said, and “may require external support." Georgieva has said that the IMF is prepared to commit its $1 trillion in lending capacity to support nations that need help in dealing with the pandemic.

New Trump panel to explore path to reopening US economy