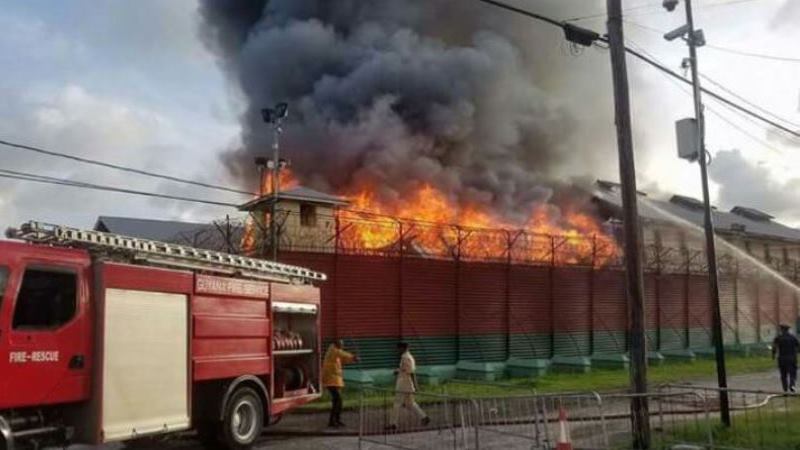 Dozens of rebellious inmates set fire to the maximum security prison in Guyana's capital Sunday, destroying most of the building while they exchanged gunfire with police and soldiers, authorities said. At least one officer was killed.

Public Security Minister Khemraj Ramjattan said Sunday night that security forces had regained control of the prison, but firefighters were still dealing with the blaze.

President David Granger later reported that an officer died at Georgetown Hospital while being treated for a gunshot wound to the chest. He said officials were still trying to determine if anyone had died in the fire, though he feared there could be more dead.

"There must be some because of the nature of the fire," Granger said.

He also said officials were unsure if there were other serious injuries. Before the president spoke, state television NCN said eight people, some of them guards, had been taken to the hospital for treatment.

Ramjattan said officials were investigating what led to the unrest at Camp Street prison. "We have heard that there might have been breakouts but we don't want rumors," he said.

He said plans were being made to move the prisoners elsewhere. "Removing the prisoners is paramount as well as getting the fire under control. This is a very unfortunate incident," he said.

Last year, 17 inmates died when they were trapped in their cells by a fire that they had started to protest against conditions in the prison and long delays in their trials.