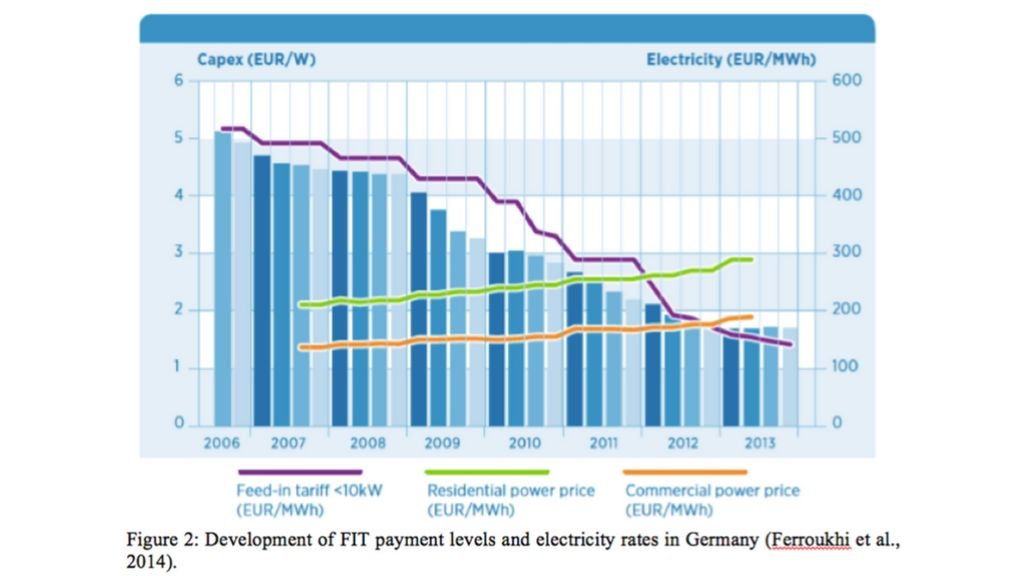 This is the second of a three-part series

Go back to Part 1

Call to Action in the Cayman Islands

The Cayman Islands as a UK Overseas territory, does not have a specific commitment under the Paris climate accord. As a Small Island State, it faces many of the challenges stated in Part 1&3. The territory has developed a draft policy “Achieving a Low Carbon Climate-Resilient Economy: Cayman Islands’ Climate Change Policy” (Young, 2019).

One outcome of this draft policy was the National Energy Policy 2017-2037 which outlines a goal of limiting per capita greenhouse gas (GHG) emissions per capita in 2020 to a 2014 level. Though this policy was instituted in 2017, the Cayman Islands government has made little progress in implementation, according to Lisa-Ann Hurlston-McKenzie of the National Conservation Council (Young, 2019) 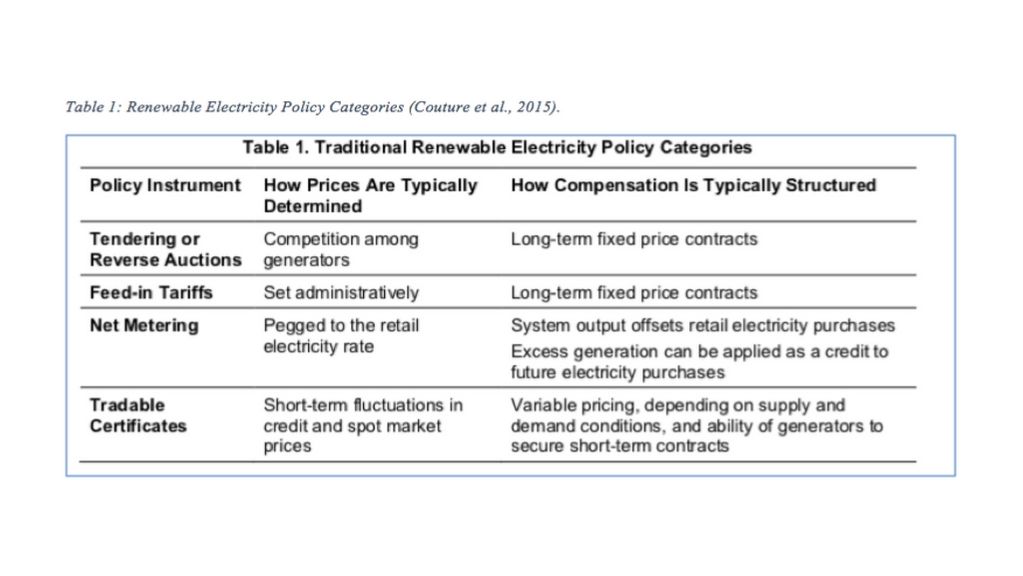 In Europe, Feed-In-Tariffs (FITs) were developed since the 2000’s, guaranteeing fixed feed-in price rates dependent on the type of technology, for example rooftop solar photo-voltaic (PV). FIT feed-in rates had been historically higher than the retail electricity price in many countries, which provided incentive for PV system owners to supply all generated power to the grid. The funds which support the pay-out by the utility of an above market price for FIT payments to PV system owners was generally covered in a surcharge (per kWh) included in the retail rates being paid by consumers (Couture et al., 2015).

Since, however, renewable electricity generation costs have been decreasing, the FIT rates for new PV systems have also been decreasing (Figure 2). As a result, many consumers would desire to offset their own consumption with the PV electricity they have generated.

While this arrangement has benefits to the utility customer by allowing them to reduce their electricity bill, the FIT approach presents a challenge to the utility company to recover the surcharge used to pay guaranteed FIT rates to the FIT scheme energy exporters.

With traditional FITs, generators are required to supply all of the produced power to the grid. Self-consumption was not allowed. In Australia, however, the FIT model allows for energy exporters to consume some of their generated energy on-site.

Utilities in the US and Europe have been struggling with the FIT approach. In some cases, a Net-Metering or Net-Billing approach has been chosen. In the US, both Net Metering and Net Billing allow for a prosumer to offset some or all of its own consumption with its own generated renewable energy. The difference between these two approaches in the US is that Net Metering uses the same rate for energy entering from the grid as energy exported to the grid, whereas, in a net-billing system, different rates are used (Couture et al., 2015).

In summary, there has not been a “One-Size-Fits-All” approach and different territories use different approaches.

Electricity customers in island states, with a few exceptions, typically face high retail electricity rates (compared to global averages) as a result of the need for fuel imports. In the Cayman Islands, for example, the retail rate for residential users in the first quarter of 2014 was about CI $0.37/kWh (~ USD $0.44/kWh) (Couture et al., 2015). Currently residential rates are at CI $0.1087/kWh (~ USD $0.13/kWh), according to CUC’s listed rates (CSD, 2019).

In order to promote the addition of distributed energy systems (solar PV or wind turbines) into island power systems, the local utility and utility-regulation companies have developed various pricing policies based on various forms of Feed-In-Tariffs (FITs), Net-Metering or Net-Billing policies. These policies have primarily been based on templates or examples developed in Europe, U.S.A. or Canada.

In Grenada, the “Renewable Standard Offer” policy has been developed. Though this policy has been described as a “Net Billing” mechanism, it differs from the US “Net Billing Model” since small energy exporters are not allowed to self-consume any of the produced energy. Individual renewable energy installations are limited to a maximum of 100kW.

The Seychelles employs a “Net-Metering” program where excess power exported to the grid is compensated at 88% of the avoided fuel cost determined by the regulator. Self-consumption is allowed. Jamaica employs a similar pricing strategy described by JPS as “Net Billing” with excess energy being sold at an “avoided cost” determined by the regulator, Office of Utility Regulation (OUR).

The Cayman Islands instead have adopted a procedure where prosumers (consumers who also export to the grid) are charged an FIT rate for energy exported to the grid. Like a traditional FIT, the customer is charged for all energy consumed on-site at retail price. Unlike a traditional FIT, the prosumer can also retain the flexibility of consuming power from the grid. Individual renewable energy installations are limited to a maximum of 100kW. 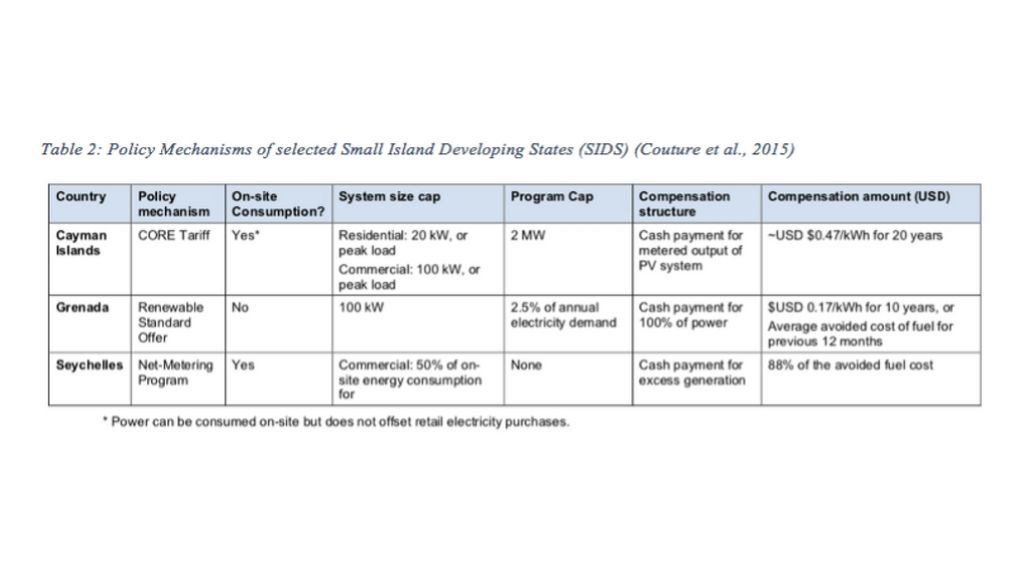 Part 3: The Cayman Islands Pricing Mechanisms or back to Part 1