Jamaican thankful after treated for rare case leptospirosis in Cayman 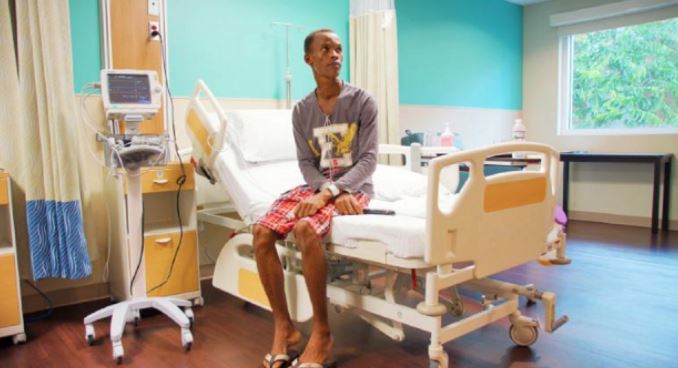 A Jamaican farmer who had a life-threatening case of leptospirosis, is thankful for healing, following a pioneering intervention by doctors at Health City Cayman Islands.

Clester Christie came to Grand Cayman for work, but fell seriously ill a few days after his arrival.

Fortunately for the 31-year-old, Dr Nelson Iheonunekwu, an internal medicine and nephrology specialist at the Health Services Authority (HSA), recognised that Christie's vitals were falling fast, and quickly referred him to the East End, Grand Cayman health facility.

At Health City, doctors confirmed the HSA's diagnosis that Christie was suffering from a complication of the zoonotic bacterial infection, leptospirosis, called leptospirosis pulmonary hemorrhagic syndrome, which is a rare bacterial disease that forms blood clots in the lungs of the afflicted.

"He came here (and at) that time he was in a very critical stage. I would say his oxygen level, his saturation level, was in the 50s, so if he stayed like that a few more hours, he would have arrested ... within half an hour we took him to the operating room," Dr Chattuparambil said.

Giving the lungs a rest

The Health City team hooked Christie up to an extracorporeal membrane oxygenation (ECMO) machine via the venovenous route, to support his lungs, marking the first time Health City doctors had used ECMO in this manner. For previous patients, ECMO had been used to support both the heart and lungs.

"When the lungs (have) failed to do what (they are) supposed to do, we can rest the lungs by bringing the blood out from the body into the (machine and wash) out the carbon dioxide, (then add) more oxygen to it and (bring) it back into the heart. So, this machine (helps) the lungs start to function normally," he outlined.

Dr Chattuparambil said their bronchoscopy examination revealed that "both lungs were packed with blood clots, both sides ... the lung ... was ...choked - so no blood was going inside."

"He had a lot of clots in his lungs, so we had to clear them all ... at the same time, we don't want fresh bleeding to happen. He slowly improved ... but again, he started deteriorating when we tried taking this machine off after a couple of days ... we had to do repeated bronchoscopy procedures to remove the remaining clots ... before he could get better," Dr Dhruva explained.

Seeing the patient on the road to recovery was doubly rewarding for the doctors who treated him. "We are very happy for this man, who is doing well now," said Dr Dhruva.

Dr Mahantesh Patil, Medical Intensivist at Health City, said: "Mr Clester, I would say he is very lucky to (have been) on the island at the right time ... in my last 15 years of clinical experience, I have not seen such a severe form of leptospirosis."

Dr Patil also noted that the mortality rate for patients in Christie's condition is "extremely high, I would say as high as 70 per cent ... despite all support, and if you don't have a facility to do multi-organ support, I would say he had no chance to survive."

The HSA's Dr Iheonunekwu was deeply moved when he saw his former patient after his recovery: "I was amazed. In fact some of the nurses in critical care who were taking care of him, who knew how gravely sick he was, were in tears when he actually came to pay us a visit ... so we were really, really moved and we were very grateful to God that he made it. It was a very amazing story. If only people knew what Health City does, they would appreciate what was done for him. Any other place - if it was in areas where ECMO was not available - he would have died ... there is no doubt about that."

Dr Binoy, as he is commonly known, noted the severity of Christie's condition when he arrived at Health City. "We knew that if we didn't extend help, he was going to die," he said, adding that the facility got its reward in seeing Christie reunited with his wife and children.

Health City Cayman Islands, the vision of renowned heart surgeon and humanitarian Dr Devi Shetty, is supported by two major healthcare organisations, Narayana Health and the US-based Ascension, which is America's largest faith-based and nonprofit health system, providing quality care to all, with special attention to those who are poor and vulnerable.

Health City is one of only two hospitals in the Caribbean to have receive the Joint Commission International's ‘Hospital Accreditation’, and is noted to provide a full array of specialized medical treatments.

From the brink of death: Cayman man revived after hearts stops beating