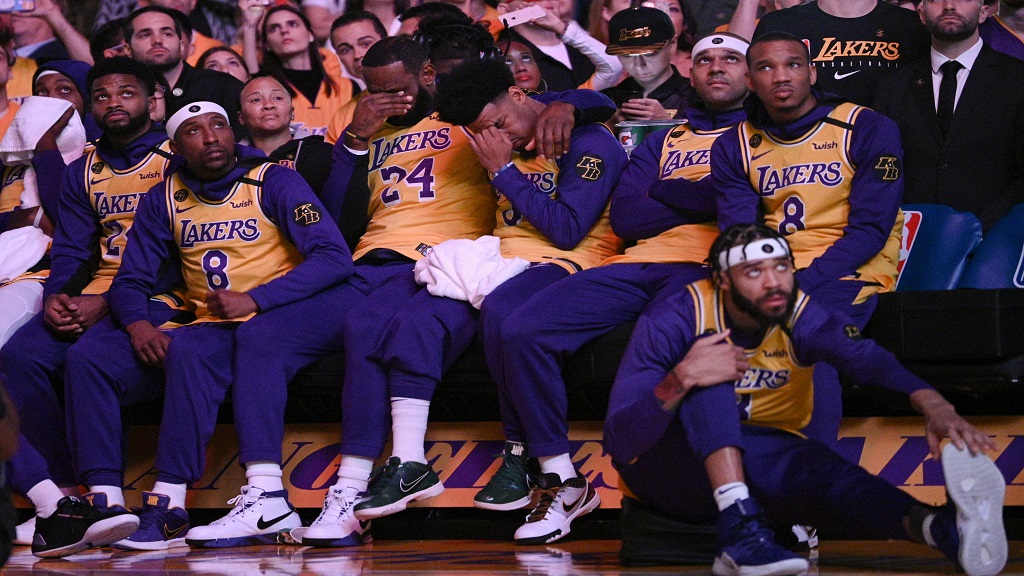 Fans crowded outside the venue and those inside, including the players, donned replica Bryant jerseys amid heartfelt tributes to a franchise legend and his 13-year-old daughter Gianna.

An emotional video played on the big screen and a 24.2 second moment of silence was taken to honour all seven victims of Sunday's helicopter crash in Calabasas, California.

James read their names and gave a speech asking for the event to be a "celebration" of Bryant before the on-court action against the visiting Portland Trail Blazers began.

After a subdued start, Damian Lillard lifted the energy in the third quarter, hitting 23 points en route to a game-high 48 to issue the Lakers a 127-119 loss.

Lillard became the first NBA player to make 40 three-point shots in a five-game span and the first to record at least 35 points, five rebounds, five assists and five three-pointers in five straight games.

On the other side of the country, an inspired Kyrie Irving paid a personal tribute to his old mentor in fitting fashion.

The Brooklyn Nets guard, who earlier in the week vowed to "carry the torch", shot 19-of-23 from the floor and hit seven three-pointers as he tallied 54 points, five rebounds and five assists in a 133-118 win over the Chicago Bulls.

James Harden (35 points, 16 rebounds) and Russell Westbrook (32 points, nine assists) did likewise, the pair leading the Houston Rockets to a 128-121 victory against the Dallas Mavericks, who were without the injured Luka Doncic.

Giannis Antetokounmpo played his part, putting up 31 points in a double-double at Fiserv Forum, but the Milwaukee Bucks failed to prolong their nine-game winning run, losing to the Denver Nuggets 127-115.

The Toronto Raptors had more success preserving a streak, recording a 10th successive victory thanks to Pascal Siakam's 30 points in a 105-92 road win over the Detroit Pistons.

The Phoenix Suns might have avoided a late 111-107 home loss to the Oklahoma City Thunder had Ricky Rubio made more of his shooting opportunities, the Spaniard going two-of-eight from the floor for eight points in 30 minutes.

Due to knee soreness, the Boston Celtics (32-15) could be without Kemba Walker for Saturday's game against the Philadelphia 76ers (31-18).