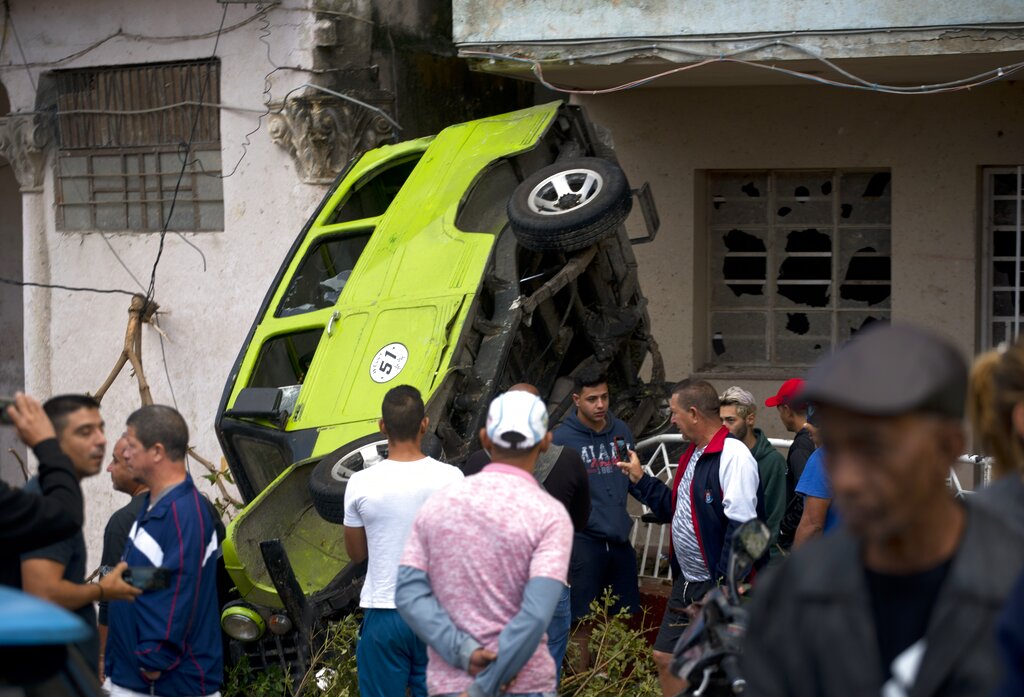 The Latest on Cuba's deadly weather (all times local):

More than 200,000 people lost water service, largely because of power cuts that left pumps out of service. Some 100 underground cisterns close to the coastal section of Havana were contaminated by seawater.

Three electric substations were knocked out by the tornado, the strongest to hit Cuba since Dec. 26, 1940, when a Category F4 tornado hit the town of Bejucal, in what is now Mayabeque province.

A government meteorologist says the tornado that struck Havana was a Category F3, with winds between 155 and 199 miles per hour.

Miguel Angel Hernandez of the Cuban Center for Meteorology says tornados are unusual around the capital and a strong one hadn't hit the city in decades. He says Sunday night's storm was produced when a cold front hit Cuba's northern coast, similar to one that struck in 1993, although without producing a tornado.

Some of the heaviest damage from the rare Havana tornado is in the eastern borough of Guanabacoa, where the apparent twister tore the roof off a shelter for dozens of homeless families.

Yoelkis Dip says his 54-year-old grandmother María Esther Linares was killed while hunting for safe shelter after the tornado broke the roof of the home where she was living with two granddaughters.

Thirty-one-year-old Dianabys Bueno was living in the shelter with her husband and son after they were forced to relocate by the collapse of their home in Central Havana. Much of the housing in Havana is in dire condition due to years without maintenance, and building collapses are routine even in ordinary storms.

Bueno says, "This has already happened to us once," and adds, I'm not going anywhere."

Cuba's president says the storm that hit late Sunday has killed three people and injured 172 others.

The tornado that hit Havana tore the concrete roof off an apartment building in the Regla district and dumped it into an alleyway, briefly trapping residents in their homes.

Seventy-seven-year-old Marlene Marrero Garcia says she was in her ground-floor apartment with her grandchildren and great-grandchildren Sunday night when she heard electrical transformers begin to explode. Then the tornado passed.

She says, "It looked like fire, everything was red, then everything began to fall."

Marrero says she and her family were trapped by debris for about half an hour before firefighters arrived.

She and other residents said two of their neighbors had been hospitalized.

Cuba's president says the storm has killed three people and injured 172 others.

Leanys Calvo, a restaurant cook in Havana's 10th of October borough, says she was working Sunday night despite heavy rain and wind when she heard a rumbling noise outside and looked out to see what appeared to be a tornado touching down.

The 38-year-old says early Monday that "it was something that touched down, and then took off again. It was like a tower." She says it was red and green, adding "it was here for 2-3 seconds, nothing more. They were the most frightening seconds of my life."

Police officers on the scene early Monday said 73 people were injured and hospitalized in the 10th of October section but no one had died. They declined to give their names because they were not authorized.

Cuba's president says the tornado has killed three people and injured 174 others.

A reported tornado has left a trail of destruction across the Cuban capital of Havana.

Power poles in the city's 10th of October borough have been knocked over or were leaning precariously early Monday, held up only by their electrical lines. A palm tree more than 30 feet (9 meters) tall had crushed a pre-revolutionary American car.

The tornado ripped metal sheeting off many roofs and hurled the deadly shards through the air. The streets are littered with bricks fallen from housing facades. The windows in one seven-story hospital had been sucked out of their frames by the wind and all the patients, new and expectant mothers, had to be evacuated.

Julio Menendez, a 33-year-old restaurant worker, says Havana's 10th of October borough "looks like a horror movie" after what appeared to be a deadly tornado swept through.

Menendez, who was home Sunday night when the tornado hit, says "from one moment to the next, we heard a noise like an airplane falling out of the sky. The first thing I did was go hug my daughters" — who are nine and 12.

The Cuban capital was battered late Sunday and early Monday by powerful winds and heavy rains that downed many power lines. Cuba's president says the tornado killed three people and injured 174 others.

Menendez spoke Monday near the Daughters of Galicia Hospital, whose patients, all expectant mothers or mothers with newborns, were evacuated to another hospital. Many glass windows in the seven-story hospital had been sucked out of their frames by the power of the wind, leaving curtains flapping in the breeze.

Cuba's president says a tornado in eastern Havana has killed three people and injured 174 others.

The Cuban capital was battered late Sunday and early Monday by powerful winds and heavy rains. A blackout hit many Havana neighborhoods around 9 p.m.

Early Monday, President Miguel Diaz-Canel posted photos of himself on Twitter with rescue workers besides what appeared to be a vehicle overturned by the storm. Little further information about the storm appeared in state media.

Photos posted by Cuban media and Havana residents on Twitter showed cars crushed by fallen light posts and cars trapped in floodwaters around the city. One local radio station said on Twitter that the Regla and 10th of October sections of Havana and the town of San Miguel de Padron had been affected by the tornado.