The Latest: Swiss engineers sent to help Lebanon after blast 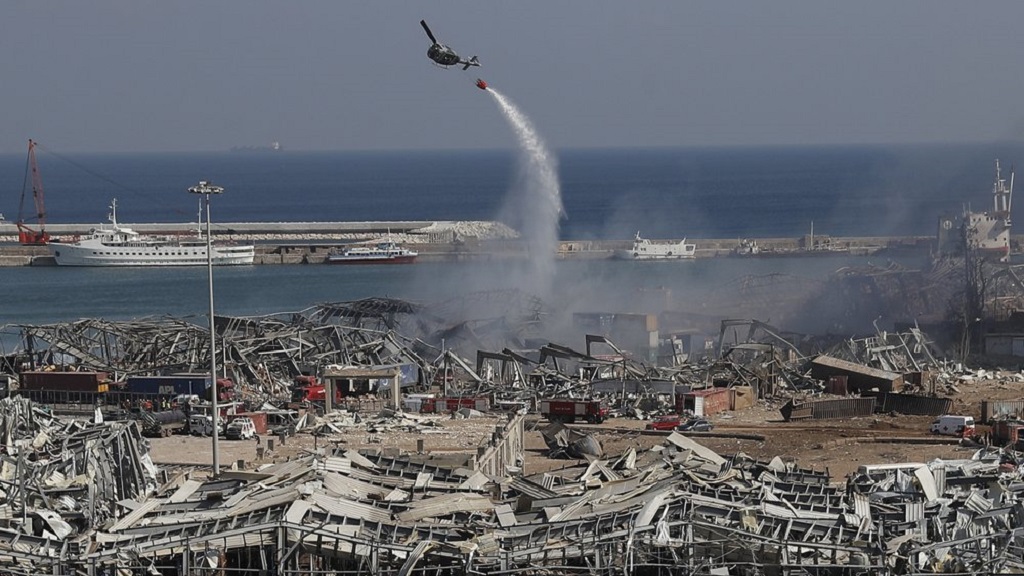 An army helicopter drops water at the scene of Tuesday's massive explosion that hit the seaport of Beirut, Lebanon, Wednesday, Aug. 5, 2020. Residents of Beirut awoke to a scene of utter devastation on Wednesday, a day after a massive explosion at the port sent shock waves across the Lebanese capital, killing dozens of people and wounding thousands. (AP Photo/Hussein Malla)

BEIRUT (AP) — The Latest on the explosion in Beirut (all times local):

Switzerland has sent a team of specialists including engineers and logistics experts to Lebanon to help with the aftermath of the explosion in Beirut.

The Alpine nation says it is responding to a request from Lebanese authorities.

The Swiss team, which also includes telecom engineers and a psychologist, will assist in securing the country's damaged embassy and ambassadorial residence. Switzerland's Foreign Ministry says the experts also will be available to examine the condition of Lebanon's public buildings such as schools and hospitals.

The Foreign Ministry says it has no indication that Swiss citizens were among the victims of Tuesday's explosion.

China says it is sending a medical team and supplies to Lebanon in the aftermath of the port explosion that injured more than 5,000 people.

"As a friendly country to Lebanon, China is willing to continue to provide assistance within its capacity for Lebanon to tide over the difficulties," Wang told reporters at a daily briefing.

China has long been a major customer for Middle Eastern oil and gas, and in recent years has sought to boost its influence in the area as an alternative to the US and Europe. For many years, China has also contributed soldiers to the United Nations peacekeeping operation in southern Lebanon.

Germany's foreign minister says an employee of the German Embassy in Beirut was killed in the huge blast that devastated the Lebanese capital earlier this week.

Heiko Maas says in a statement that the woman died as a result of "the consequences of the explosion in her apartment." He has offered his condolences to embassy staff.

The embassy building was damaged in the blast.

Tuesday's explosion appeared to have been caused by an accidental fire that ignited a stockpile of ammonium nitrate at Beirut's port. It killed at least 135 people, injured more than 5,000 and caused widespread destruction.

Britain is sending a Royal Navy ship to Beirut to help the city recover from Tuesday's devastating port explosion.

Britain has pledged a 5 million pound ($6.6 million) humanitarian support package for Lebanon and says it will send search and rescue teams and expert medical support.

A French presidential official says French President Emmanuel Macron is arriving in Beirut following Tuesday's deadly port explosion and will be greeted by Lebanese President Michel Aoun. The official says Macron will go directly to the port and meet Lebanese and French teams in the disaster area.

The official spoke anonymously in accordance with the presidency's practices.

Later in the day, Macron will head to the presidential palace for meetings with top officials. He will also meet with members of different political factions and civil society.

The French official says Macron's trip is meant to show that Lebanon is not alone and to give the Lebanese people confidence. Macron has said his role is to show that he believes in the country.

How CXC marked, graded July 2020 exams under the modified approach