The Latest: US forces leave Manbij, as Syrian forces move in 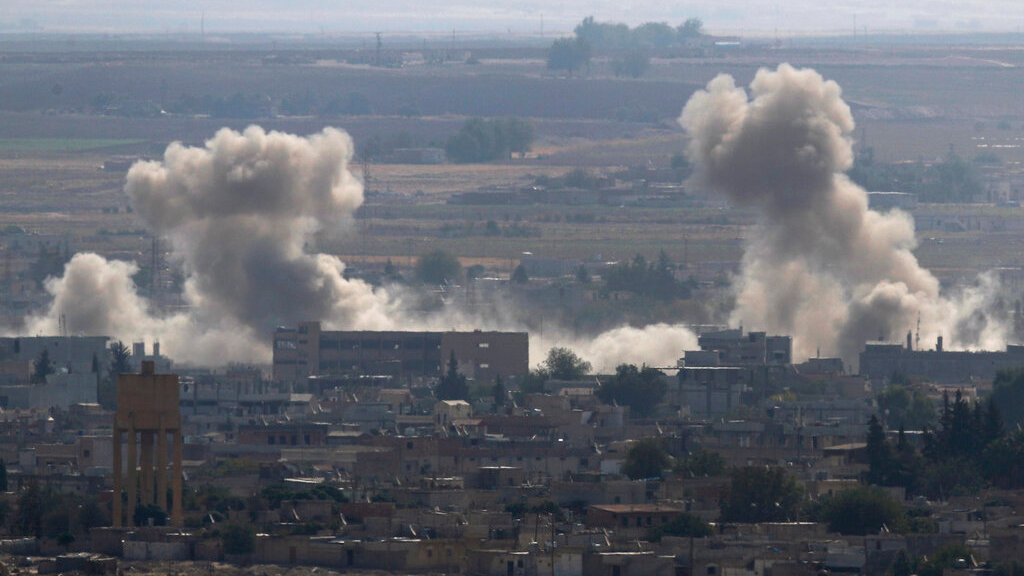 In this photo taken from the Turkish side of the border between Turkey and Syria, in Ceylanpinar, Sanliurfa province, southeastern Turkey, smoke and dust billows from targets in Ras al-Ayn, Syria, caused by bombardment by Turkish forces, October 15, 2019. (AP Photo/Lefteris Pitarakis)

The Latest on Turkey's offensive in northern Syria (all times local):

A US military spokesman says American troops have left the town of Manbij as part of their withdrawal from northeast Syria.

Col. Myles B. Caggins tweeted: "We are out of Manbij."

He added that the US-led "coalition forces are executing a deliberate withdrawal from northeast Syria."

His tweet came hours after Syrian state media reported that government forces have moved into the centre of Manbij where they raised the national flag.

The flashpoint area housed US outposts from where they patrolled the region since 2017 to deter a confrontation between Turkey and Kurdish fighters.

Syria's Kurds have struck a deal with Syrian government forces to fend off the Turkish invasion, as their former ally, the US has ordered a withdrawal from the northern border zone.

French diplomatic officials say talks between France and the US are focusing on the need to prevent a re-emergence of the Islamic State group amid the violence in Syria.

According to two officials with his office, President Emmanuel Macron spoke with President Donald Trump in a phone call Monday, insisting on the threat posed by Turkey's offensive in northeast Syria to the whole region and Europe.

The officials say France's priority is to issue a strong, coordinated diplomatic response in order to put pressure on Turkey so that the country ends its offensive in northern Syria.

The officials spoke Tuesday on condition of anonymity.

A Russian envoy for Syria says that Moscow will not allow Turkish and Syrian government forces to clash, underscoring his country's role as de facto power broker in the conflict amid a US pullout.

Alexander Lavrentyev, presidential envoy for Syria, told Russian state news agencies on Tuesday that "no one is interested" in potential fighting between Syrian government troops and Turkish forces that entered Syria last week. Lavrentyev said Russia "is not going to allow it."

Lavrentyev confirmed that Kurdish leaders and representatives of the Syrian government-held talks at a Russian military base last week but said that he was not aware of any results.

The main Kurdish-led force in Syria says it has lost 23 fighters in clashes with advancing Turkish-led forces over the past day.

The Syrian Democratic Forces says Tuesday that the casualties were inflicted over the past 24 hours in fighting concentrated around Syria's northern border.

The group's statement said that the deaths occurred at several flashpoints including Ras al-Ayn where 11 SDF fighters were killed, and seven in Tal Abyad.

The SDF said that 39 of its fighters were also wounded in the fighting.

On Sunday, the group said at least 45 fighters had been killed since the start of Turkey's invasion into northern Syria, now in its seventh day.

Britain's foreign secretary says it has suspended arms sales to Turkey for items that could be used for its ongoing military incursion into Syria.

Dominic Raab told Parliament Tuesday no export licenses for those items will be granted while a "very careful" review of arms sales is conducted.

He says the British government calls on Turkey to "exercise maximum restraint and to bring an end to this unilateral military action."

Raab criticised Turkey for a "reckless" action that "plays straight into the hands of Russia" and the Syrian government.

Turkey's defense ministry says a Turkish soldier was killed in a mortar attack on its forces carried out from the Kurdish-held town of Manbij.

The ministry said eight other soldiers were wounded in Tuesday's attack, which came on the seventh day of a Turkish incursion into northeastern Syria that aims to drive Syrian Kurdish militias away from a border area.

The Turkish military retaliated with an assault that "neutralised" an estimated 15 Syrian Kurdish fighters, the ministry said.

Separately, two people were killed in a new mortar and rocket attack by Syrian Kurdish fighters on a Turkish town bordering Syria, local officials said. The attack on the town of Kiziltepe, Mardin province, also wounded 12 other civilians, the governor's office said.

Turkish officials say 18 civilians — excluding Tuesday's victims — have been killed in a barrage of mortar and rocket shells fired on towns located on the Turkish border provinces of Mardin, Sanliurfa, Sirnak and Gaziantep, since the operation began on October 9.

German Chancellor Angela Merkel has renewed a call for Turkey to end its offensive in northern Syria, which she says is harming the fight against the Islamic State group.

Merkel already urged a halt to the military operation in a weekend conversation with Turkey's president. On Tuesday, she said it should be ended "because it is visibly causing a lot of human suffering and also is bringing a lot of uncertainty with a view to the fight against IS."

She spoke alongside visiting Norwegian Prime Minister Erna Solberg, who echoed the call for "Turkey to immediately cease the operation and to respect international law."

Solberg noted that her country has suspended sales of military equipment to NATO ally Turkey, but she added: "I think it's better to have Turkey inside NATO than outside NATO." She said it's best to have Turkey in "our family," but "we cannot behave as if this had not happened."

The UN humanitarian aid coordinator says at least 160,000 civilians in northeastern Syria have been displaced amid Turkish-led military operations against Kurdish fighters.

Spokesman Jens Laerke of the Office for the Coordination of Humanitarian Affairs says most of the displacement has taken place from the towns of Ras al-Ayn and Tal Abyad, where people are fleeing south.

He said OCHA was especially concerned about some 13,000 people at the Ein Issa displacement camp, near where "hostilities and shelling" took place Monday.

Separately, spokesman Rupert Colville of the UN human rights office said it was "not seeing large numbers of civilian casualties" so far — "a few each day" — but people were being killed on both sides of the Syria-Turkey border.

He cautioned: "Obviously we're not necessarily hearing all cases, either."

President Recep Tayyip Erdogan made the comments Tuesday, during a Turkic-speaking nations' meeting in Baku, Azerbaijan, where he also called for "strong solidarity" from those nations to Turkey's incursion into Syria, which is now in its seventh day.

The Turkish push has triggered widespread condemnation. The United States called on Turkey to stop the offensive and declare a cease-fire, while European Union countries moved to broaden an arms sale embargo.

Erdogan said that as of Tuesday morning, Turkey had "liberated approximately a 1000 sq. kilometre area" from Kurdish groups it considers "terrorists" for links to an insurgency within its own borders.

He said the Turkish-led forces aimed to capture a border area in Syria spanning from the city of Manbij to the Iraqi border.

The Kurdish-led administration in northern Syria says humanitarian conditions are getting worse by the day since Turkey began its invasion last week.

Tuesday's statement warned that there is lack of much-needed humanitarian assistance after international organisations stopped their activities and withdrew their employees.

The region's semi-autonomous administration said there is a lack of medical equipment and medicines after "most of the medical centers stopped functioning."

The administration called on the UN, Arab League and European Union to "intervene quickly and provide medical, logistical and humanitarian assistance to the displaced to avoid the humanitarian crisis."

The UN human rights office is urging Turkey to investigate reported cases of "summary executions" that could have been committed by a Turkish-backed armed group in northern Syria.

Rupert Colville, a spokesman for the UN High Commissioner for Human Rights, on Tuesday cited video footage showing fighters with the Ahrar al-Sharqiya armed group filming themselves capturing and executing three Kurdish captives on a highway in northern Syria on Saturday.

He cited reports of another alleged summary execution of a Kurdish woman politician on the same road, also on Saturday.

Colville told reporters in Geneva that Turkey "could be deemed responsible" for violations committed by armed groups over which it has "effective control" or the group's operations during which the violations occurred.

He said the videos were widely circulated on social media.

Syrian state media says government forces have entered the centre of the once Kurdish-held northern town of Manbij and raised the national flag.

Syrian President Bashar Assad's forces had left the area at the height of the civil war, leaving it to the Kurdish groups.

The flashpoint area housed US troops who patrolled the region since 2017 to deter a confrontation between Turkey and Kurdish fighters.

The Kurdish Hawar News Agency said American troops left the town on Tuesday morning moving west toward the Tishrin Dam on the Euphrates.

Turkish President Recep Tayyip Erdogan signaled on Monday that his military was ready to begin the assault Manbij.

Italy's foreign minister says that his country will examine all existing arms contracts with Turkey to see if they can be legally cancelled.

Luigi Di Maio told lawmakers on Tuesday that Italy will block all future arms exports to Turkey, as agreed the previous day by a summit of EU foreign ministers condemning Turkey's military offensive in northern Syria.

Di Maio called on Turkey to "immediately suspend all military operations in Syria," saying it alone was responsible for the aggression and that the only way to resolve the Syrian crisis is through diplomacy.

Turkey has defied widespread opposition from its NATO allies and pressed on with its military operation against Kurdish groups in Syria, now in its seventh day.

An Associated Press journalist on Tuesday reported heavy bombardment of targets in the countryside of Ras al Ayn, days after Turkey announced that it had captured the border town. Turkish jets also carried out at least one airstrike.

The Syrian Observatory for Human Rights, a war monitor, reported Kurdish fighters had retaken the town.

A Turkish military official denied reports that Turkey had begun an assault on the Kurdish-held town of Manbij, without giving further detail.

Meanwhile, President Recep Tayyip Erdogan defended Turkey's offensive in an op-ed in the Wall Street Journal, calling on the international community to support the initiative or "begin admitting refugees" from Syria.

Kurds mobilize in Syria as Turkey poised for imminent attack