Local turtle rescued after being flipped on its back 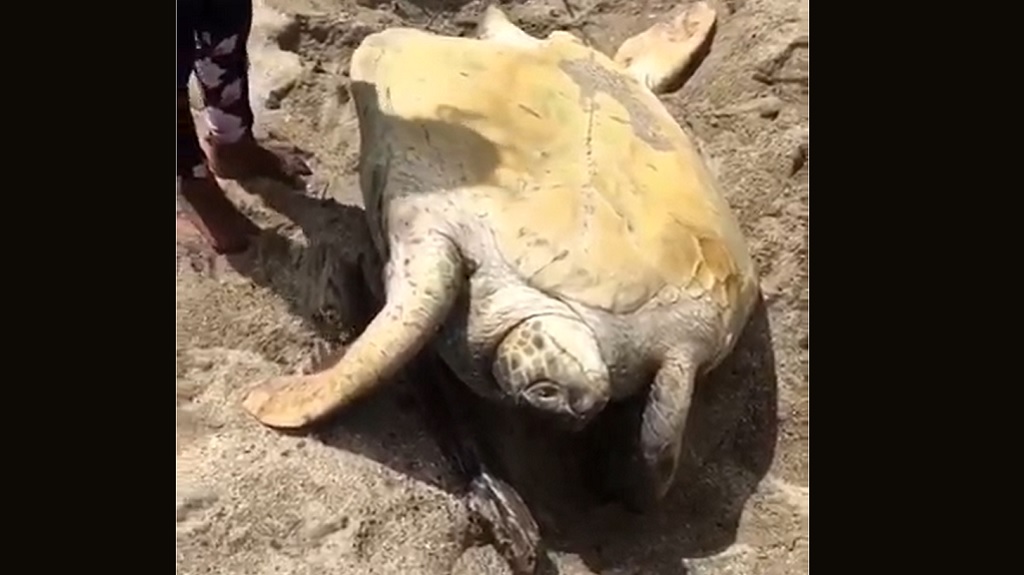 A protected turtle which had been flipped on its back had a narrow escape after it was rescued by a Trinidadian woman.

Facebook user Kyma Ali shared a video to social media last week showing the turtle which had been found flipped over in a suspected poaching attack.

Poachers have been known to do this to turtles, often returning to kill the weakened animal for her meat and eggs.

Ali said the turtle, which is a green sea turtle, had probably been lying on her back for a few hours, having been flipped in the night.

She said although it’s a crime to kill or take turtles, due to limited enforcement it still occurs.

“Hunters tend to wait until a nesting female came on shore before flipping her onto her back where she could not escape. The next day or in a couple of days the hunter will return to kill the very weak mother for her meat.”

“This is outright torture. Imagine being flipped over with your baby/babies inside of you, in the scorching sun for days,” she said.

Ali, who identified herself on Facebook as a volunteer with the El Socorro Centre for Wildlife Conservation, said she had been camping and keeping an eye on the turtles by patrolling the beach.

“Whilst camping, I was patrolling the coast on my own accord every day for five days checking on nestlings when I stumbled upon this majestic creature at 10am in the scorching sun.”

“It was suspected that she was just there for several hours, after being flipped over the night before.”

“After we flipped her over, you can see she was extremely exhausted and dehydrated. We gave her a few pushes to help her get back out to sea, and hoped she made a full recovery,” she said.

Ali said she hopes her post can bring awareness to the situation.

“I hope this post brings light to this situation and maybe one day things MIGHT actually change. The only power I have at this moment is to spread awareness and to educate others,” she said.

About turtles in Trinidad and Tobago

Trinidad and Tobago is home to five turtle species which visit its shores to nest – all five species are protected.

In addition to the endangered Leatherback turtle, other turtles which either nest on Trinidad and Tobago’s shores or are found in its waters are the olive ridley, loggerhead, hawksbill and green turtle.

All five species are protected by law – poaching or destroying a turtle’s habitat could result in a $100,000 fine or jail time.

By law, the penalty for causing damage to sea turtles is $100,000 and imprisonment for two years.

Anyone with information on turtle poaching or the destruction of turtle habitats is urged to contact the police on 555, 999, or 800-TIPS, or the Ministry of Agriculture, Lands and Fisheries on 220-6253.

Leatherback turtles under siege: US chef looks at bycatch in T&T