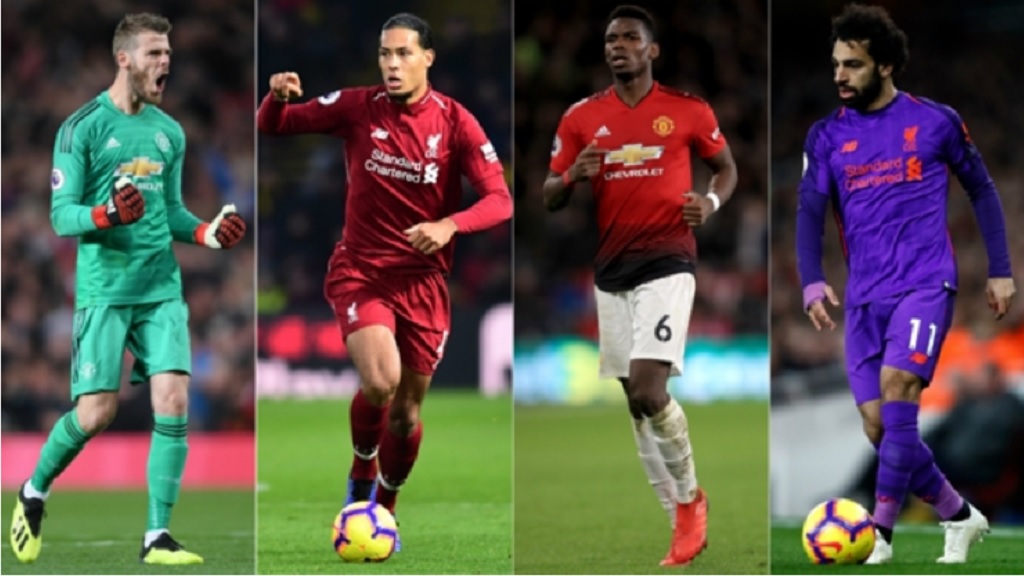 There is plenty to play for as bitter rivals Manchester United and Liverpool prepare to go head-to-head in a Premier League blockbuster at Old Trafford on Sunday.

United have the chance to extend their unbeaten streak in the league to 10 games, while Liverpool can move ahead of Manchester City at the top of the table.

The Red Devils are a rejuvenated force thanks to caretaker manager Ole Gunnar Solskjaer and, while they are all but out of the title race, they can still have a major say on where the trophy ends up in May.

Ahead of the mouth-watering showdown in Manchester, we pick a combined XI from the stellar line-ups of two fierce foes.

One of the Premier League's best and most consistent keepers, De Gea gets the nod ahead of Reds shot-stopper Alisson.

Liverpool have conceded 15 goals this season since Alisson's big-money arrival from Roma, 20 fewer than United. However, De Gea's quality over the years is undisputed. The Spaniard has also kept four clean sheets and let in only seven league goals since Solskjaer replaced Jose Mourinho after the December edition of this fixture.

Local boy Alexander-Arnold broke into the Liverpool first team at the start of last season and, having helped the Reds to the Champions League final, is well established as a first-team regular at 20.

Recent injury problems only served to show Alexander-Arnold's importance to the side, with Liverpool suffering for the absence of a defender who has proven his worth at the back and possesses real quality from dead balls.

After joining from Hull City in 2017, Robertson took time to nail down a starting place under Jurgen Klopp. He is now indispensable.

The Scotland captain has developed into one of the Premier League's standout performers at full-back, with his pace and energy allowing him to make a difference at both ends of the field. Mourinho claimed got tired just watching Robertson during his unplanned United swansong.

What a turnaround it's been for Lindelof. Error-prone and seemingly out of his depth following his arrival from Benfica in 2017, doubts emerged over the Swede's ability to succeed at Premier League level.

But the 24-year-old has started to justify his €35million price tag under Solskjaer. Assured, strong and confident on the ball, Lindelof is emerging as a fine defender amid United's nine-game unbeaten run in the league.

The man credited with turning Liverpool's fortunes around in defence. The Reds were infamous for their back-line calamities before Van Dijk arrived last January.

The Netherlands international made an instant impact, scoring a winner against Everton, and has kicked on from there. His influential showings are expected to put him in the running for England's end-of-season awards.

The unsung hero at Old Trafford, Herrera has become an ever-present in United's starting XI since Mourinho was sacked.

Embodying all the characteristics that make up a fan favourite, the Basque battler has provided balance and bite, while freeing up Paul Pogba to shine.

When Liverpool brought in Naby Keita and Fabinho ahead of this season, Wijnaldum appeared to be at risk despite an impressive 2017-18.

But the former Newcastle United star has lifted his game again, showing versatility by featuring across the midfield. The Dutchman has superb close control, a deceptive turn of pace and can influence the game in attack and defence.

The transformation of Pogba has been incredible. Out of favour and heading for the exit door under Mourinho – who left the World Cup winner unused on the bench in December's Anfield defeat – the lavishly gifted Frenchman is resoundingly answering his army of critics in England.

Pogba has been involved in 15 goals in 12 games across all competitions during Solskjaer's tenure, scoring nine goals and recording six assists – six more than he managed in 20 matches for Mourinho.

Liverpool's Egyptian king, Salah was one of the best players in European football as he hit the ground running back in the Premier League last season, scoring 44 times in all competitions.

The forward's early 2018-19 exploits were comparatively modest, but he has warmed to the task as Liverpool chase the domestic title. Now often deployed through the middle, Salah remains Liverpool's difference-maker in attack.

Occasionally overshadowed by Salah and Roberto Firmino, Mane has the tools to harm any defence, as he showed in the Champions League final when he dragged Liverpool level against Real Madrid.

The winger's sheer speed sees him create regular openings for himself, scoring 10 goals or more in each of his five Premier League seasons. Liverpool's recent stutter in the title race would have been worse without four goals in as many matches from Mane.

Another player shining thanks to Solskjaer, Rashford is thriving in his central role at United.

Either pushed out to the right to accommodate Romelu Lukaku or among the substitutes under Mourinho, Rashford is now flourishing as the team's focal point with six goals in nine Premier League appearances. He had only managed three in his previous 15.