Things got off to a late start on Tuesday morning as newly minted Premier, Alden McLaughlin, announced  the details of the assignment of ministries following the Island’s May 24 General Elections.

The government of “national unity”, as it is dubbed, was sworn in to Cabinet on May 31, and today’s press conference inside Government Administration Building, formalized who would be heading up each Government ministry.

Despite being scheduled to start at 10:00 am, things didn’t get going until 10:20 with Premier McLaughlin doing most of the speaking.

The morning’s surprises included elected representative for West Bay South, Tara Rivers, being moved from the Ministry of Education, Employment and Gender Affairs to the Ministry of Financial Services and Home Affairs.

Speaking of Rivers’ move to the Ministry of Financial Services, McLaughlin noted that Rivers had the right qualifications and her experience working abroad equipped her for the new post.

Another surprise was independently elected candidate for Bodden Town East, Dwayne Seymour, being assigned as  Minister of Health, Environment, Culture and Housing.

McLaughlin used the opportunity to note that his administration would announce counsellors at the end of the week.

McLaughlin further revealed that he had two counsellors in mind for  Minister of Education, Youth, Sports, Agriculture and Lands, Juliana O'Connor-Connolly.

See the names of all the ministers and ministries named on June 6 below: 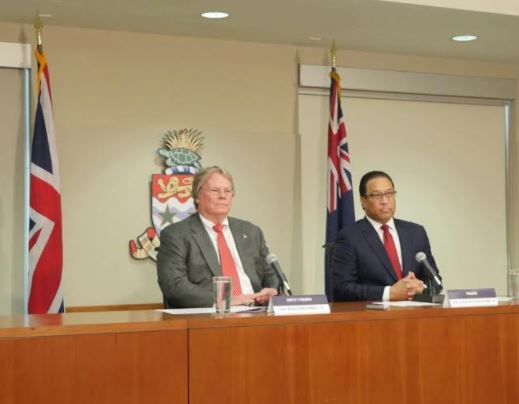 Rejected: New coalition gov't will not include Bryan

Sea of Blue: Big win for Independents in 2017 Elections