Medvedev powers into US Open semis after winning Russian roulette 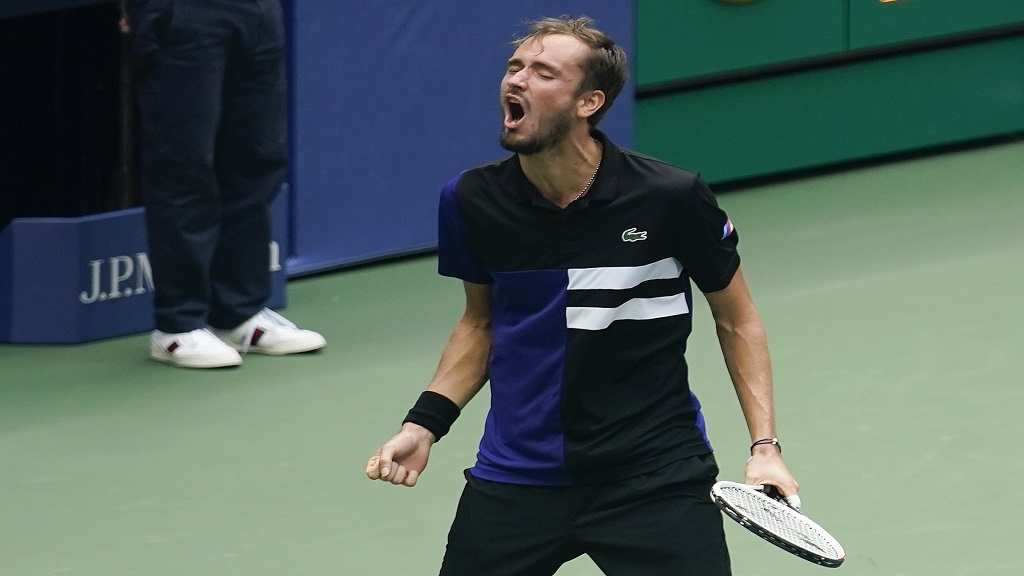 Daniil Medvedev, of Russia, reacts after defeating Andrey Rublev, of Russia, during the quarterfinals of the US Open tennis championships, Wednesday, Sept. 9, 2020, in New York. (AP Photo/Seth Wenig).

Daniil Medvedev powered into the US Open semi-finals with a straight-sets win over fellow Russian Andrey Rublev on Wednesday.

It was a match of fine margins despite the one-sided scoreline, with Medvedev claiming the only break of serve midway through the second set after having snatched the first from Rublev's grasp.

The 24-year-old began to struggle physically in the closing stages and roared with delight and relief when he closed out the win and set up a semi-final against Dominic Thiem or Alex de Minaur.

There was scarcely a sniff of a break in the opening set as each man found early rhythm from the baseline, even after the action was briefly suspended due to a power outage.

Rublev seized the initiative in the breaker but squandered three set points at 6-3 up to lose both the opener and his cool, the world number 14 smashing his racquet into the court and his bench in anger.

Medvedev went into the contest having never dropped a set in previous meetings with his compatriot, and the match was firmly under his control when he held to love twice in a row before breaking in the sixth game of the second set with an authoritative smash.

Rublev was looking forlornly for a solution against the Medvedev serve and forehand, the third seed closing out another routine service game to move into a 2-0 lead.

A terrific drop shot seemed to give Rublev renewed vigour early in the third and there was a scare for Medvedev at 4-5 when he needed treatment for a shoulder problem and cramp, although a missile of a cross-court backhand in the next game seemed to dispel some of the concerns.

Rublev successfully challenged a second serve at 1-0 in the tie-break, but he was less fortunate when a thumping Medvedev backhand clipped the outside of the line.

Medvedev was by now clearly hampered physically, choosing to serve and volley at 5-4 ahead for the first time in the match only to drop a routine effort in the tramlines.

But he made certain there would be no threat of a fightback, taking his first match point when Rublev sent a backhand long.

Serena Williams into US Open semifinals, closer to 24th Slam