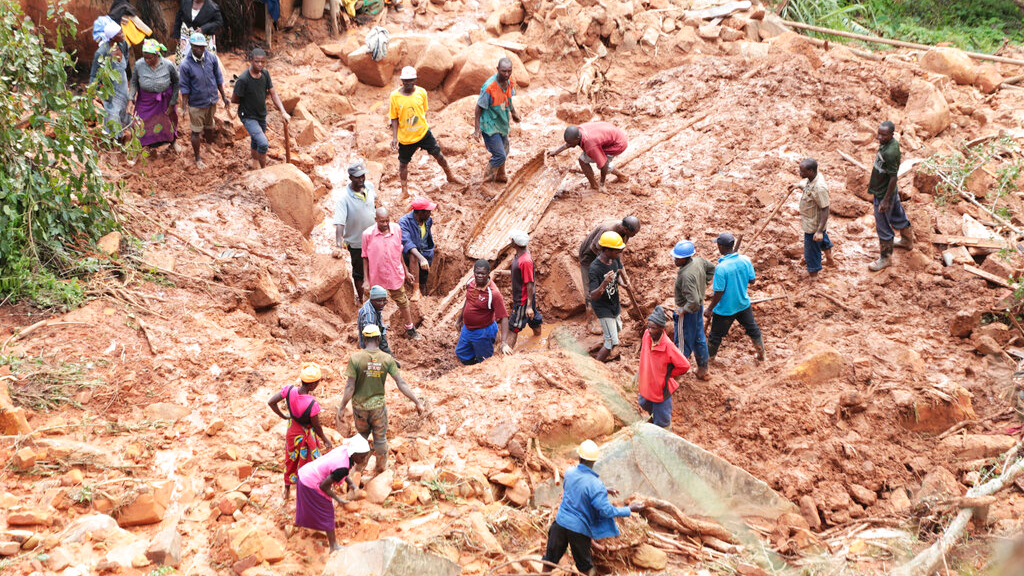 A family dig for their son who got buried in the mud when Cyclone Idai struck in Chimanimani about 600 kilometres south east of Harare, Zimbabwe, Tuesday, March, 19, 2019. (AP Photo/Tsvangirayi Mukwazhi)

Mozambique on Wednesday began three days of national mourning for more than 200 victims of Cyclone Idai, one of the most destructive storms southern Africa has experienced in decades. In neighboring Zimbabwe, state media said the death toll was above 100.

The full extent of the devastation will only be known once floodwaters from torrential rains, expected to continue into Thursday, recede. It will be days before Mozambique's inundated plains drain toward the Indian Ocean, and aid groups have warned the waters are still rising.

People have been reported clinging to rooftops and trees since the cyclone roared in over the weekend. The United Nations humanitarian office said the town of Buzi, with some 200,000 people, was at risk of becoming at least partially submerged.

"Flood waters are predicted to rise significantly in the coming days and 350,000 people are at risk," the U.N. office said.

Zimbabwean President Emmerson Mnangagwa received a somber welcome in the hard-hit mountain community of Chimanimani near the border with Mozambique. Zimbabwean officials have said some 350 people may have died.

Some bodies from Zimbabwe have been swept down the mountainside into Mozambique. "Some of the peasants in Mozambique were calling some of our people to say, 'We see bodies, we believe those bodies are coming from Zimbabwe,'" said July Moyo, the minister of local government.

Mozambique's president late Tuesday said more than 200 people were confirmed dead there. President Filipe Nyusi after flying over the affected region on Monday said he expected more than 1,000 deaths.

Aid workers were shocked as they arrived in the badly hit Mozambique port city of Beira, estimated to be 90 percent destroyed. Its 500,000 residents are scrambling for food, fuel and medicine. Some neighborhoods are below sea level.

International aid has started trickling in to ease the crisis, while churches in Zimbabwe collected supplies to send on.

"Everyone is doubling, tripling, quadrupling whatever they were planning" in terms of aid, said Caroline Haga of the Red Cross in Beira. "It's much larger than anyone could ever anticipate."

On Wednesday, the Emirates News Agency cited the Emirates Red Crescent as saying that the United Arab Emirates would provide 18.3 million dirhams ($4.9 million) to Mozambique, Zimbabwe and Malawi. Zimbabwe's president said a planeload of aid from the UAE was expected to arrive in the capital, Harare, later Wednesday.

The chairman of the African Union Commission said the continental body would provide $350,000 in immediate support to the countries.

The European Union has released 3.5 million euros ($3.9 million) in emergency aid, and the United Kingdom pledged up to 6 million pounds ($7.9 million). Tanzania's military has airlifted 238 tons of food and medicine, and three Indian naval ships have been diverted to Beira to help with evacuations of stranded people and other efforts.

Sacha Myers of the nonprofit Save the Children described rising floodwaters and "rivers and dams bursting their banks." She said getting aid to affected areas was difficult as roads and bridges across the region have been washed away or submerged.

Now hunger and illness are growing concerns. Crops across the region have been destroyed. Waterborne diseases are likely to spread.

"There are large areas where people are really finding it difficult to find sources of clean water," Gert Verdonck, the emergency coordinator with Doctors Without Borders in Beira, said in a statement. He added: "On top of all of that, there's the issue of how to treat people who fall sick_with so many health centers damaged or destroyed."

Cyclone's death toll into the hundreds in southern Africa