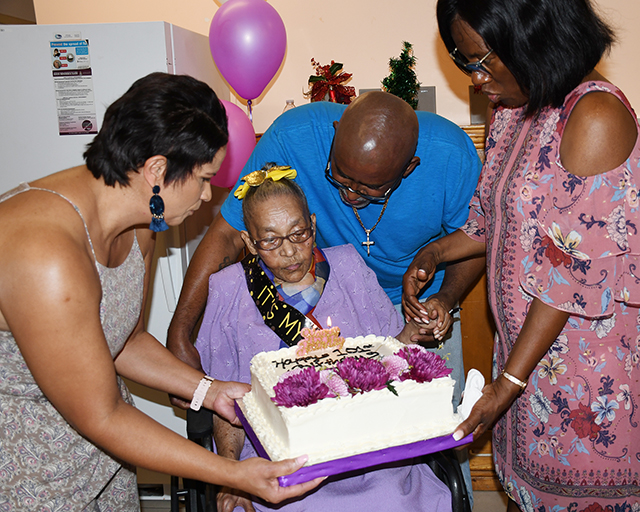 Born 1 February 1919 (nearly three months after the end of World War 1), the Golden Age Home resident was feted at the Department of Children and Family Services (DCFS)-run home on her special day.

Marked by several speeches, the West Bay celebration began with an opening prayer and blessing by Pastor Nariah LeBlanc of West Bay Church of Christ. He was followed by Reverend Alice Blair from East End United Church, who considers Ms Ina a role model who has touched many lives.

Among the family members who formally congratulated the centenarian was her youngest child Lowell Connor, her stepdaughter Doralee McLaughlin, and nephew Kenross Conolly. All commended her for being a nurturing, hardworking and matriarch.

While her son paid homage to his mother in a short and emotional address, Ms McLaughlin also fondly recounted the long hours Ms Ina worked providing for them while her husband spent months working at sea. In addition, she described a kind and resourceful woman who brought up her blended family without favouritism and knowing the Lord in a Cayman very different from today.

These memories were amplified when her nephew Isaac Rankine read: “Lord I Did Not Know,” by Caymanian artist, poet and educator Nasaria Suckoo-Chollette. Depicting the strength and industriousness of local women in those tough earlier times, the poem pays homage to the strong and righteous women that this nation has sprung from.

Chairman of the Cayman Islands Seafarers Association, Mr Denniston Tibbetts spoke on behalf of his members. Congratulating Ms Ina on her landmark birthday and wishing her many more years, he told guests that she was the oldest member on their books.

In his remarks, Councillor for Community Affairs Austin Harris said that Ms Ina was: “not only welcoming a new decade but was ushering a new century.”

DCFS Director Paulinda Mendoza-Williams’ suggested that the outpouring of affection and care shown for Ms Ina was something quintessentially Caymanian that her department and the Ministry would like to see more of.

DCFS’s Elderly Services Manager, Cassandra Fearon, agreed. “DCFS is extremely pleased to have Ms Ina as a resident of the Golden Age Home,” she said. “We take pride in providing quality care for all residents, not only to live longer but to help them live quality lives.”

The mother, grandmother and great-grandmother blew out the candles and thanked guests. Her party, the celebration of a life well-lived, ended with everyone enjoying food and beverages to live music performed by members of the Cayman Islands Music Association.

Apologies were given for Speaker of the House, Hon. McKeeva Bush; Leader of the Opposition/East End MLA Arden McLean; and Ministry of Community Affairs’ Chief Officer Ms Teresa Echenique, who sent birthday greetings.