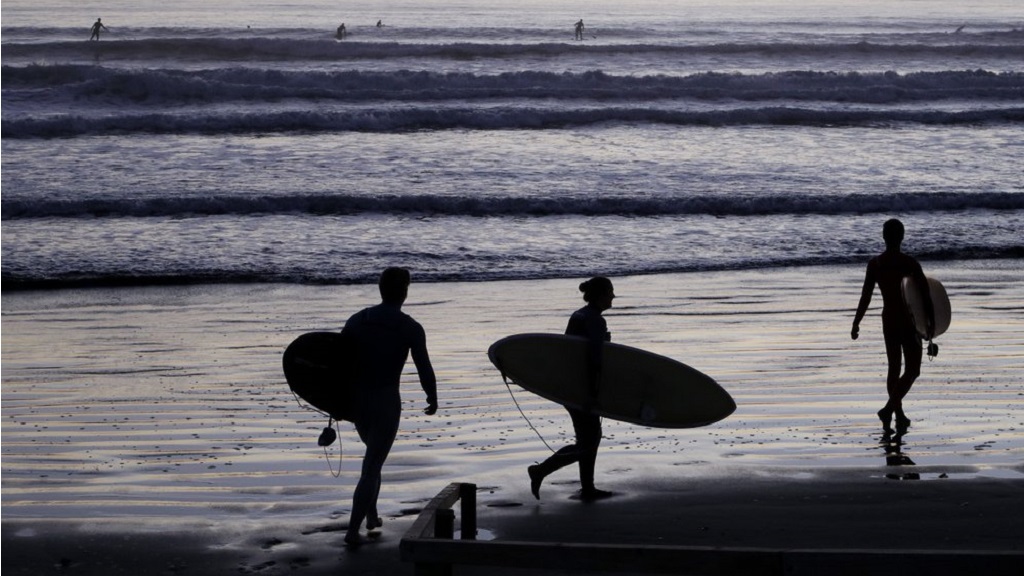 France and Spain, two of the worst-hit countries in the coronavirus pandemic, were laying out separate roadmaps Tuesday for lifting their lockdowns, while signs emerged that the virus has been all but vanquished in New Zealand and Australia.

But on the other side of the globe, Brazil was emerging as a new hotspot for infections. And new doubts were raised over whether Japan would be able to host the already postponed Summer Olympics next year without the development of a vaccine.

The key question of when to reopen schools loomed around the world as nations seek to restart their battered economies. 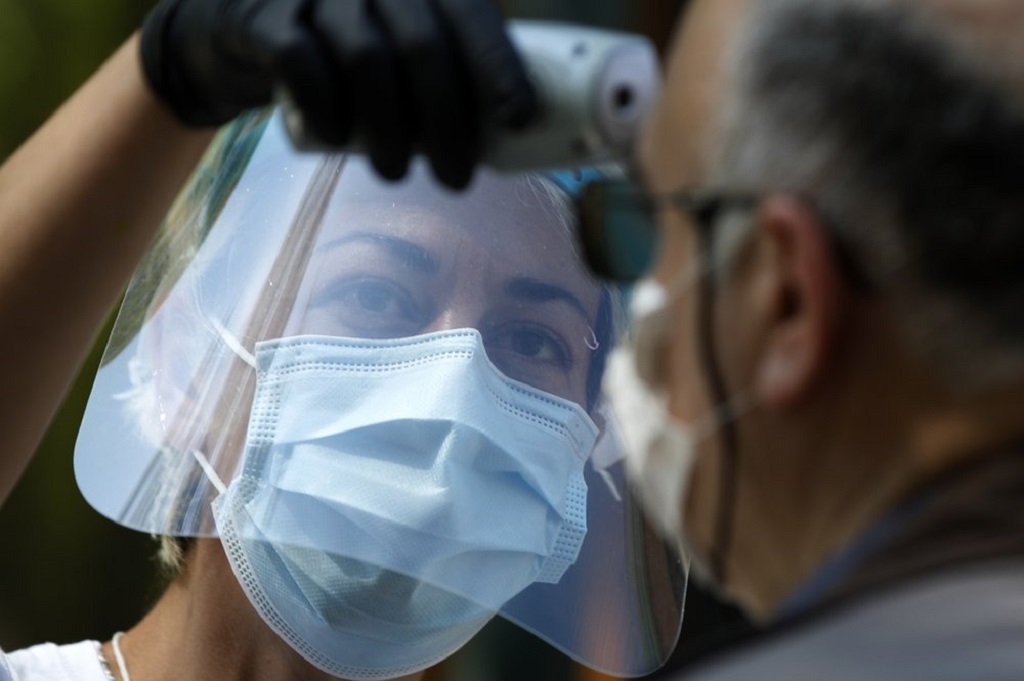 (Photo: A Red Cross worker checks people's temperatures during the measures against the new coronavirus at the main entrance of a lower court complex buildings in Athens on Tuesday, April 28, 2020. Lower courts and the state property registry reopened Tuesday, beginning an easing on lockdown measures due the COVID-19 in Greece, where infection rates have remained relatively low. A broader and staggered easing program will start on May 4. (AP Photos/Thanassis Stavrakis)

Although the coronavirus seems to affect children far less seriously than adults, many officials, teachers and parents are concerned about the health risks that school openings could pose. Some point to the difficulties of ensuring that children stick to social distancing and frequent hand washing, and to the health risks for teachers.

But many parents would struggle to return to work without schools being open, hampering efforts to counter the world's deep economic tailspin.

In France, President Emmanuel Macron wants schools to start reopening May 11, but teachers, parents and some mayors are raising alarms. The government says parents can decide whether to send their children back to class and is releasing more details later Tuesday.

Joel Wilmotte is among a growing number of French mayors refusing to re-open their schools, at least for now.

"I am not against the reopening of schools," he said on the Facebook page of his northern town of Hautmont.

But he listed seven reasons why he's not ready to do so, including ill-equipped teachers and cleaning staff and a poll that suggests that most French parents oppose school reopenings. So he's keeping his town's six schools closed "until further notice."

Greece, which has managed to keep its coronavirus death toll low at 136 people, was also releasing more details Tuesday about easing its lockdown but schools remained a tricky topic.

Schools will be reopened "gradually, with conditions" and subject to constant review, said the Health Ministry's coronavirus spokesman, infectious diseases specialist Sotiris Tsiodras. No opening date has yet been set.

Scientists agree children are less at risk from the virus and appear to transmit it less than adults, said Tsiodras.

Hard-hit Italy, however, is keeping schools closed until September. That is putting parents in the difficult position of returning to work without access to their typical fallback babysitters: grandparents, who are now considered off-limits because they are the most vulnerable to the virus.

Emer McCarthy, who works in the Vatican's child protection office, tweeted that Italian Premier Giuseppe Conte had addressed a lockdown exit "for everyone except Italy's children. Incredible. No mention of schools, childcare options, nothing. But football yes. #ChildrenNotSeenNotHeard."

(Photo: Surfers wait for officials to open Bondi Beach in Sydney, Tuesday, April 28, 2020, as coronavirus pandemic restrictions are eased. The beach is open to swimmers and surfers to exercise only. (AP Photo/Rick Rycroft)

In China, where the pandemic began, schools began opening on Monday, but only to seniors at middle and high school levels preparing for exams. Class sizes were cut to no more than 30.

China's daily number of new cases has fallen into the single digits, but authorities remain vigilant over the possibility of a second wave of infections.

In the United States, which has the world's highest death toll at more than 56,000, President Donald Trump said states should "seriously consider" reopening their public schools before the end of the academic year, even though dozens already have said it would be unsafe for students to return until the summer or the fall.

"Some of you might start thinking about school openings, because a lot of people are wanting to have the school openings," Trump said. "Young children have done very well in this disaster."

Trump also admitted the number of virus deaths could reach 70,000 in the US, after citing 60,000 several times this month.

The number of confirmed infections worldwide has risen to over 3 million and the confirmed death toll has topped 211,000, according to a tally by Johns Hopkins University.

The true toll of the pandemic is likely much higher because of limited testing, mild cases that are missed, flaws in counting the dead and governments that may be trying to conceal the extent of their outbreaks.

Italy, Spain, France and Britain accounted for more than 21,000 virus-related deaths each.

In Brazil, President Jair Bolsonaro has insisted COVID-19 is just a "little flu" and claimed there is no need for the type of restrictions that have slowed the infection's spread elsewhere.

(Photo: Homeless men stand against the wall on the street of downtown Johannesburg, South Africa, Tuesday, April 28, 2020. Many have lost their income as South Africa is under a strict five-week lockdown in a effort to fight the coronavirus pandemic. (AP Photo/Themba Hadebe)

But the true numbers are believed to be vastly higher given the lack of testing and the many people who haven't sought hospital care.

Medical officials in Rio de Janeiro and at least four other major Brazilian cities have warned t hat their hospital systems are on the verge of collapse or are too overwhelmed to take any more patients. There are also signs that a growing number of Brazilian victims are dying at home.

"We have all the conditions here for the pandemic to become much more serious," said Paulo Brandão, a virologist at the University of Sao Paulo.

Bolsonaro says Brazilians need to resume their lives to prevent an economic meltdown but most state governors have adopted restrictions to keep people home and slow the virus's spread.

"There may still be some smouldering ashes out there, and they have the potential to become a wildfire again, if we give them the chance," she said, quoting a microbiologist.

Her government loosened its lockdown, which had shuttered schools and most businesses. Surfers hit the waves at dawn Tuesday, builders returned to construction sites and baristas fired up espresso machines.

In Australia, hundreds returned to the water after Sydney's iconic Bondi Beach reopened to swimmers and surfers. Still, people can only use the beach during daylight, cannot linger and are limited to ensure social distancing. Australia has reported only 83 virus deaths, less than the tolls reported by over 25 US states.

But the virus is still a long-term foe. The president of the Japan Medical Association, Yoshitake Yokokura, said he thinks it will be difficult to hold the rescheduled Tokyo Summer Olympics even in 2021  without an effective coronavirus vaccine.

Japan and the International Olympic Committee agreed to postpone the Tokyo 2020 Games until July 2021 due to the pandemic. Japan is under a monthlong state of emergency amid a rapid increase of infections and medical workers say hospitals are overburdened.

Brazil edges toward being next big coronavirus hot spot

The Latest: Portugal to ease virus restrictions next month