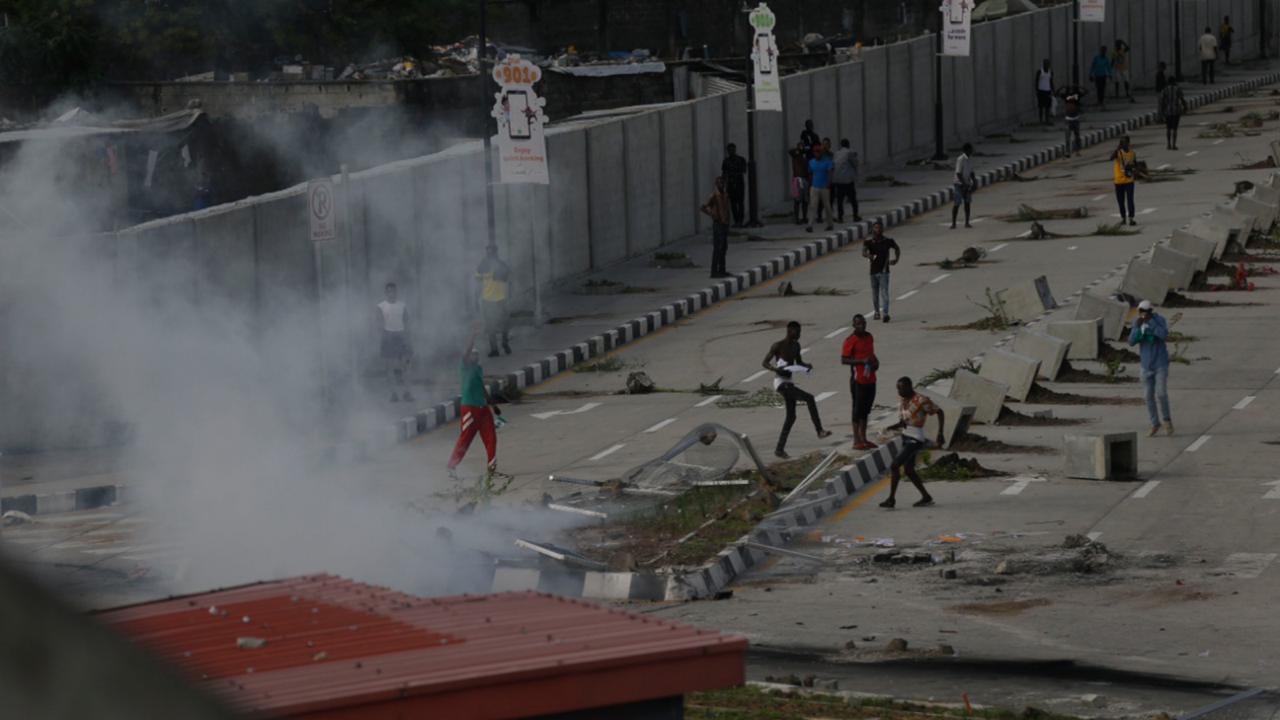 Protesters run away as police officers use teargas to disperse people demonstrating against police brutality in Lagos, Nigeria, Wednesday October 21, 2020. After 13 days of protests against alleged police brutality, authorities have imposed a 24-hour curfew in Lagos, Nigeria's largest city, as moves are made to stop growing violence. ( AP Photo/Sunday Alamba)

Nigeria's anti-police protesters stayed on the streets in Lagos on Wednesday, breaking the government curfew following a night of chaotic violence in which demonstrators were fired upon, sparking global outrage.

Shots were fired as young demonstrators set up barricades by the Lekki toll plaza in Lagos, where protesters were fired upon Tuesday night, causing injuries and an unknown number of deaths.

There were reports of gunfire across Lagos, Nigeria's largest city of 14 million, including on the highway to the airport, at a major bus station, outside the offices of a television station. Demonstrations and gunfire were also reported in several other Nigerian cities, including the capital city, Abuja.

The nationwide protests against police brutality have rocked Nigeria for more than two weeks and the demonstrators' demands have widened to include calls for an end to corruption, accountable government and respect for human rights in Africa's most populous nation of 196 million.

Despite massive oil wealth and one of Africa's largest economies, Nigeria's people suffer widespread poverty and lack of basic services, as a result of widespread corruption, charge rights groups.

Nigerians are reeling from the video from Tuesday night at the Lekki toll plaza in which protesters could be heard singing the national anthem in the darkness. Shots can be heard followed by sounds of people running away.

It's not clear who was firing the shots heard in the video, but Nigeria's security forces have been blamed for at least 10 deaths during the protests by Amnesty International, which has accused the police and military of using excessive force against the demonstrators.

There have also been widespread reports of the youthful protesters being attacked by armed gangs, who the demonstrators say sent by the police to break up the protests.

The Lagos governor early Wednesday confirmed numerous injuries for the Lekki shooting but didn't say who was responsible.

“This is the toughest night of our lives as forces beyond our direct control have moved to make dark notes in our history, but we will face it and come out stronger. I’ve just concluded visits to hospitals with victims of this unfortunate shooting incident at Lekki, ”  tweeted  Obajide Sanwo-Olu.

He had earlier warned on Twitter that the protests against police brutality had “degenerated into a monster that is threatening the well-being of our society.”

President Muhammadu Buhari has remained silent on the protests and violence sweeping across the country.

Nigeria's spiralling crisis has drawn international attention, including from U.S. presidential candidate Joe Biden who on denounced the shootings.

“I urge President Buhari and the Nigerian military to cease the violent crackdown on protesters in Nigeria, which has already resulted in several deaths,” wrote Biden. “My heart goes out to all those who have lost a loved one in the violence. The United States must stand with Nigerians who are peacefully demonstrating for police reform and seeking an end to corruption in their democracy. I encourage the government to engage in a good-faith dialogue with civil society to address these long-standing grievances and work together for a more just and inclusive Nigeria.”

Before the shootings at Lekki, Nigeria's police statement warned that security forces would now “exercise the full powers of the law to prevent any further attempt on the lives and property of citizens.”

The Inspector-General of Police said it was deploying anti-riot police across Nigeria and ordered forces to strengthen the security around correctional facilities.

The curfew in Lagos began Tuesday afternoon and most businesses and shops are closed across the city but the demonstrators are erecting barricades in the streets. The curfew was announced after a police station was burned down in the city and two people were shot dead by police.

Lagos has been the centre of the protests, with demonstrators at times blocking access to the airport and barricading roads leading to the country’s main ports.

A curfew also went into effect in Benin City after a pair of attacks on correctional facilities that left 1,993 inmates missing.

It was unclear what the prisons’ exact populations had been before the attack.

“Most of the inmates held at the centres are convicted criminals serving terms for various criminal offences, awaiting execution or standing trial for violent crimes,” he said in a statement.

The protests began two weeks ago after a video circulated showing a man being beaten, apparently by police officers of the Special Anti-Robbery Squad, known as SARS.

Young protesters marched in cities across Nigeria, under the banner #EndSARS. In response, the government announced it would ban the anti-robbery squad, which for several years human rights groups have blamed for widespread abuses, including torture and killings.

The demonstrators have not been satisfied with the disbandment of the SARS unit and are demanding an end to abuses and respect for human rights in all parts of the police force. The protests have stopped traffic in Lagos, the capital Abuja and many other large cities in Nigeria, a country of 196 million people.

Airline to test direct flights between Nigeria and Jamaica

Head to South Africa for the ‘perfect post-COVID’ getaway