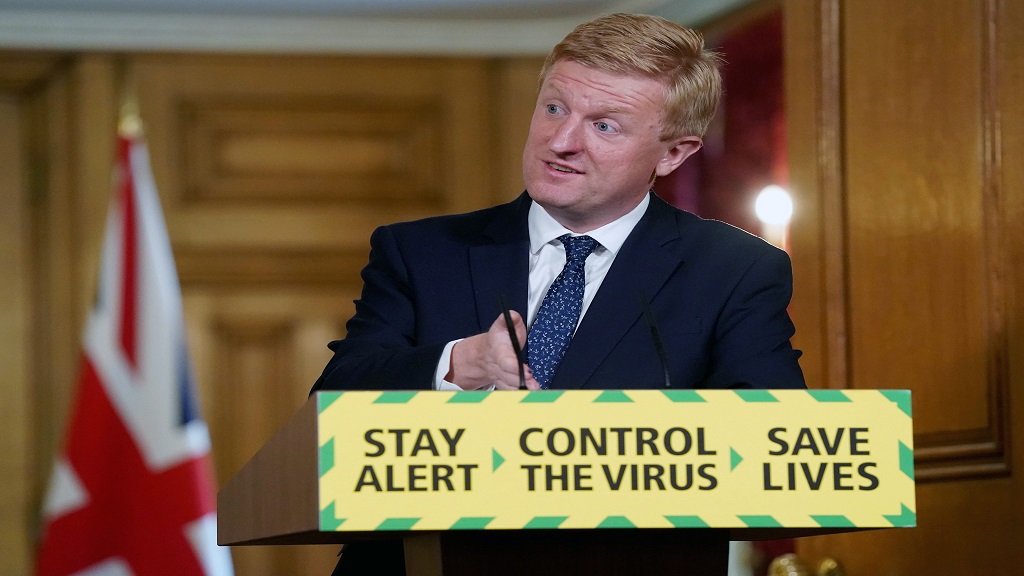 Britain's Secretary of State for Digital, Culture, Media and Sport, Oliver Dowden holds the daily COVID-19 media conference inside 10 Downing Street, London, Saturday May 30, 2020. Sport has been the focus of much media speculation as Britain begins to be released from coronavirus lockdown. (Pippa Fowles / No 10 Downing Street via AP).

The English Premier League has announced the fourth round of coronavirus testing revealed no further cases of COVID-19.

A total of 1,130 players and club staff were tested on Thursday and Friday as the competition gears towards a resumption amid the health pandemic, having been suspended since March.

Premier League clubs this week returned to contact training and top-flight action is provisionally scheduled to restart on June 17.

Four individuals returned positive results in the previous round of checks, taking the overall total to 12 since the league started its testing programme.

"The Premier League can today confirm that on Thursday 28 May and Friday 29 May, 1,130 players and club staff were tested for COVID-19. Of these, zero have tested positive," a Premier League statement read.

"The Premier League is providing this aggregated information for the purposes of competition integrity and transparency.

"No specific details as to clubs or individuals will be provided by the league and results will be made public after each round of testing."

Earlier on Saturday, the United Kingdom government confirmed competitive sport behind closed doors will be permitted from the start of June.

Premier League chief executive Richard Masters welcomed the decision, with the next stage of the process including consultations with clubs and staff over health and safety protocols.

"We have provisionally planned to restart the Premier League on June 17, but there is still much work to be done to ensure the safety of everyone involved," said Masters.

"This includes consulting with our clubs, players and managers - along with all our other stakeholders - as the health and welfare of our participants and supporters is our priority.

All of the remaining 92 fixtures are due to be broadcast nationally, though police have requested at least six – including the game in which leaders Liverpool can clinch the title – be played at neutral venues.

As it stands, Manchester City against Arsenal and Sheffield United versus Aston Villa are due to be the first matches played upon the restart.