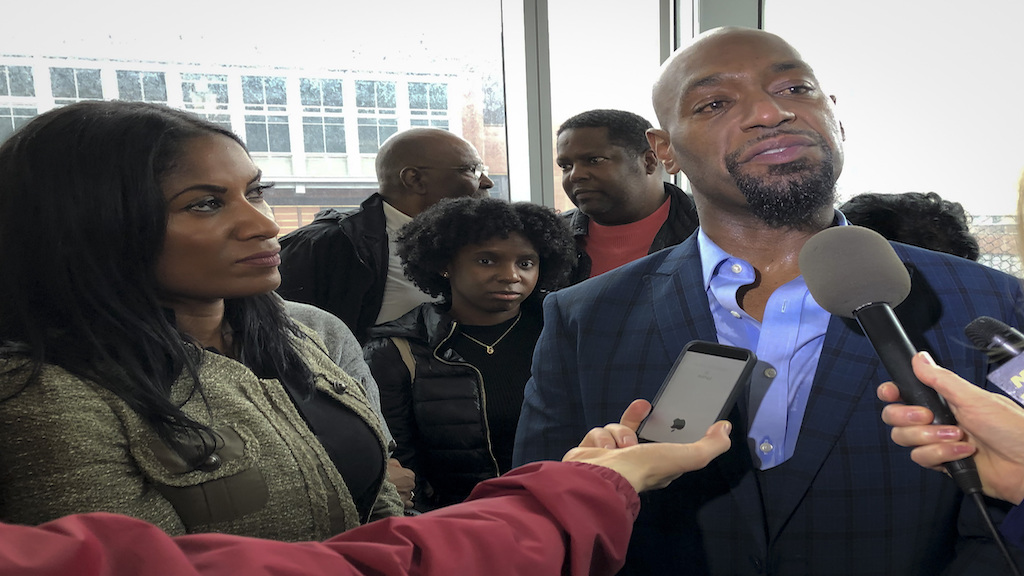 Huwe Burton speaks with reporters at the Bronx County Hall of Justice on Thursday, January 24, 2019, after his conviction was dismissed in the 1989 killing of his mother. (AP Photo/Jennifer Peltz)

Huwe Burton was 16 when he was accused of stabbing his mother to death, then staging the scene to make it appear an intruder had sexually assaulted and killed her. He insisted for decades he didn't commit the crime.

After 30 years — 19 of them in prison — Burton was cleared of the charges Thursday after Bronx prosecutors said they would no longer stand behind his murder conviction.

"To hear that there's been public acknowledgement of what was done to me — that's when I get a bit emotional," said Burton, 46, who was paroled in 2009. "It just felt like a weight was officially lifted."

While he had his freedom, living with a wrongful conviction for killing his mother, Keziah Burton, "was just a lot to bear," he said.

Prosecutors and Burton's lawyers, from the Innocence Project, said a re-investigation raised questions about the methods police used to obtain a confession he had long disavowed, and about a neighbor who implicated Burton in the crime but whom Bronx District Attorney Darcel Clark now calls a viable suspect in the killing. The neighbor is long dead.

"I no longer have the confidence that Mr Burton's confession is reliable," Clark said outside court. "I'm pleased that we were able to help restore his dignity."

Burton (whose parents were immigrants from Jamaica) was a high school student when he called 911 on January 3, 1989, to report that he had come home to find his mother's bloodied body in her bedroom. She was a nurse; his father, a building contractor, was visiting relatives in Jamaica at the time.

Police soon homed in on their son. He had no criminal record, but police would later tell reporters he didn't seem as distraught as detectives thought he should be.

After being questioned alone, Burton confessed to killing his mother to get money to pay a crack dealer. The admission resounded in newspaper headlines in an era of crack and violent crime.

Burton soon recanted his confession and said he had never used the drug. But he was convicted on evidence that centered on his confession and statements from a neighbor — who had been arrested days after Keziah Burton's killing driving her stolen car — that the teen had confessed to him and they had both then staged the scene of an apparent break-in and sexual assault.

The neighbor had convictions in robbery and rape cases, and the re-investigation turned up troubling psychological records on him, according to Burton's legal team, which also included a Rutgers University legal clinic and a Northwestern University professor.

Clark said "it became clear that there was a viable suspect that was involved" but never brought to justice. The neighbor was killed in a personal dispute before Burton's trial.

Burton's lawyers said detectives with a history of getting false confessions — they were involved in another confession-based case that ended in acquittal — pushed Burton into confessing by telling him they would help him if he did and threatening to charge him with other crimes if he didn't, among other tactics.

Burton's trial attorney, the late William Kunstler, wanted to have a psychiatrist testify about false confessions, but a judge declined the request, Burton's current lawyers said.

Prosecutors agreed Thursday that detectives used problematic interview techniques now understood to make false confessions more likely, though Clark made a point of saying that the methods were common at the time.

"It's not necessarily that they did anything wrong ... and so now we know better," she said.

A message seeking comment was left with the New York Police Department. The detectives involved have retired, Clark said.

Burton, who works in elevator construction, said he hopes his experience will help other people fight wrongful convictions.

Asked how he had gotten through prison, he said: "By not asking how. I had to find my 'why': Why is this happening to me, and what can I do about it?"