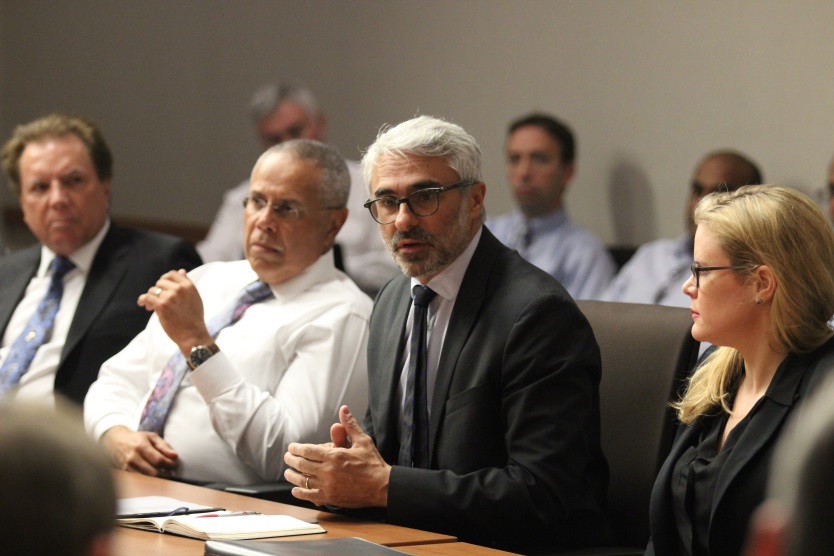 High-ranking representatives from the OECD Centre for Tax Policy and Administration visited the Cayman Islands on 3 and 4 January.

Mr Saint-Amans played a key role in advancing the OECD tax transparency agenda with the G20, and he continues to advise and work with the G20 on global tax developments. Besides her key role of managing the work of the OECD’s Forum on Harmful Tax Practices (FHTP), Ms Dejong leads the OECD’s tax and crime team.

Noting that he and Ms Dejong routinely visit jurisdictions in fulfilment of their secretariat role, Mr Saint-Amans said the OECD is extremely appreciative of Cayman’s commitment to global standards. He specifically mentioned Cayman’s membership in the OECD’s BEPS (Base Erosion and Profit Shifting) Inclusive Framework; and its membership and leadership in its Global Forum on Transparency and Exchange of Information for Tax Purposes, which is the world’s largest tax body.

“All of Cayman’s efforts are building a positive reputation. In fact, your reputation with governments and the international business community is positive, because you’ve done the job in the area of transparency,” he said, underscoring that he has heard “no complaints” from governments regarding Cayman’s exchanges of information for tax purposes.

That said, “It is difficult to explain changes imposed from outside a jurisdiction,” Mr Saint-Amans said. “There is a gap between being recognised by partners, and public reputation.

“(But) one should first think about what a tax haven is, before putting that label on the Cayman Islands,” he said, adding later: “Tax neutrality should not be a code name for tax evasion.”

Cayman Islands Premier, the Hon, Alden McLaughlin, said the visit from Mr Saint-Amans and Ms Dejong was helpful in giving an impartial view of Cayman’s regime and its progress.

“Their comments to the various audiences confirm that Cayman’s standards, when considered alongside those of our peers and larger economies, are currently keeping pace with developments,” he said.

“Of course, as standards evolve, all jurisdictions will have scope to further enhance their regimes. Government recognises this, and is committed to developing our framework in a way that meets these standards, while also best supporting our local economy.”

Minister of Financial Services, Tara Rivers, agreed with the Premier, saying that is why Government held extensive consultation in relation to legislation passed last December, in response to Cayman’s commitments to the EU on its non-cooperative tax jurisdiction initiative.

“The time spent analysing various scenarios, and speaking with local and international stakeholders, was to position our financial services industry for continued stability and growth, for the ultimate benefit of the people of the Cayman Islands,” she said.

“The Cayman Islands is, and always has been, a very resilient jurisdiction. Historically our financial services industry grew from strength to strength, even after adopting significant changes as a result of evolving global standards over the many decades; and based on our history, we anticipate that this ability to adapt and prosper will continue into the future.”

Dejong, who in her FHTP capacity liaises closely with the EU on its initiative, confirmed that Cayman’s December legislation is similar to that passed in other jurisdictions, including the UK’s Crown Dependencies and other Overseas Territories.

In addition to discussions about Cayman’s engagement in global tax matters, Saint-Amans, Dejong and participants in the various meetings talked about the entrenchment of tax issues on political agendas, and tax challenges of the digitalisation of the global economy.

Saint-Amans acknowledged that the continued levelling of the global playing field in financial services is a development that Cayman and other jurisdictions have long supported, from the standpoint of equity in global standards.

"Both he and Dejong therefore encouraged Cayman to remain engaged with global developments, to best position Cayman’s domestic policy and legislative development in the future.